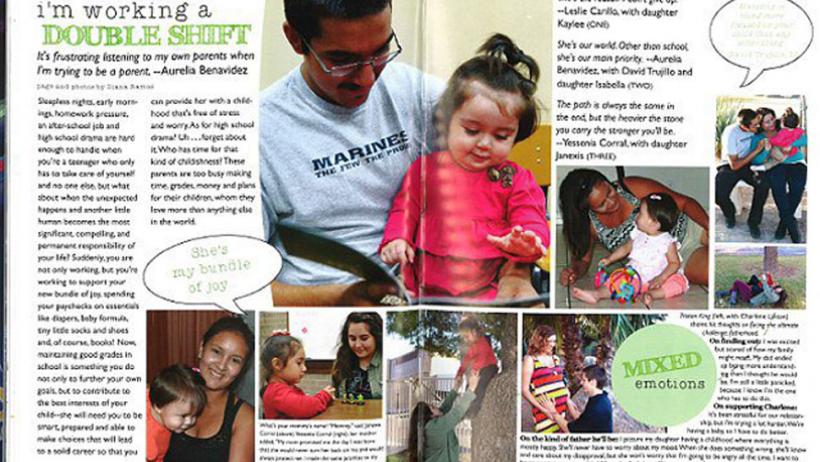 Arizona—land of the Mexican fearing xenophobes and highly contested anti-immigration laws—took a surprisingly progressive turn at Mesa High School this week. While we would have much preferred, ahem, a different kind of acceptance and tolerance, we were still happy, intrigued and supportive about their odd decision. Mesa High dedicated a two-page spread in their yearbook to a special kind of student: the teen parent kind.

Wow, O.K. What did it look like?
It's the main pic above. Or, you can check it out up close and personal here, but—in short—the reason for its controversy is clear. For starters? The section is titled "Working a Double Shift," which is a rather neutral approach to the subject (to say the least). The students pose with their babies, or pregnant bellies, and look ecstatic. The phrases "she's my bundle of joy" and "mixed emotions" highlight the two page spread amidst the happy pictures.

What did the non-teen parents have say about all this?
It's clear that the yearbook is avoiding a bias in the spread, and parents are outraged. They feel that this book of adolescent memorabilia should be focused on school-related activities, not the private (sex) lives of students.

Aren't they kind of right?
Nope, not really. Yes, yearbooks are designed to focus on school-life, but I think we can all agree that those boundaries have always been—and grow increasingly—blurred. Prom and volunteer work (for example) aren't really part of school either, but you bet your britches those events are always in the yearbook. In fact, I can recall my school's staff interviewing students with interesting lives. There was the girl who figure skated competitively, the kids born to immigrant parents and, hell, one year we had an entire page dedicated to twins and how they felt about being a twin. Students are part of school and, like it or not, teen pregnancy is a very real, very prevelant issue that can't be swept under the rug.

Why we support it this seemingly odd decision
Because we've got to stop demonizing teenage pregnancy. While we'll be the first to admit that it often doesn't end well, it doesn't mean we can't support those kids who've stepped up to life's proverbial plate and are swinging as hard and as best as they can. Teens are almost adults, but their brains aren't fully developed—they're still children themselves in many ways—and deserve to know that because they may or may not have made a mistake, that their future isn't dashed to pieces.  Instead of alienating them, we should be encouraging them to build a community to support each other. This yearbook spread didn't make everything look Instagram picture perfect—it made it look, well, complicated. Which it is. And always has been.

MTV came under heat for their show 16 and Pregnant (damn vultures celebrating the misfortune of others and profiting off the glorification of teen-pregnancy!) but research has since proved that the controversial show actually reduced teen pregnancy. Most teenagers crave a life chock full of effervescent fun, Top 40 and fledgling independence—becoming a parent axes that exploration and responsibiilty-less existence fast. Parenting is arguably the very antithesis of what we're hard-wired to pursue at that age. And guess what? Teens aren't dumb—they noticed the correlation. All the fame in the world isn't worth a life of dirty diapers and sleepless nights.

To Mesa High School: We salute you for bringing real life to your pages and to celebrating those unconventional students instead of stuffing them into the shadows.