The First Time My Son Broke My Heart 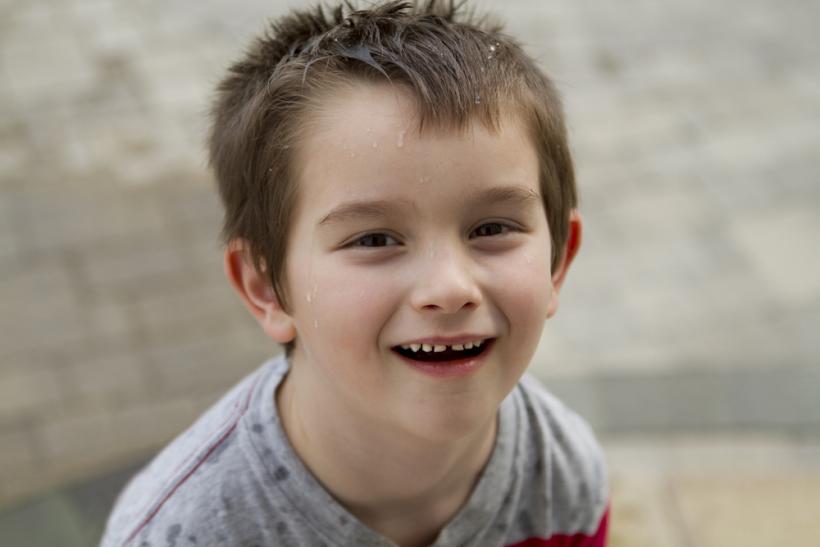 I love watching my son and my husband bond, but it’s becoming apparent I’m losing my little boy.

“Mom, can you lie down with me?” my six-year-old son asked in his small voice as I looked for a shirt that might match the only clean pair of pants that fit.

On that Wednesday, the first of his summer vacation, I was in the middle of my frantic morning routine in which I try to get out of the house, on time, looking as professional as possible. He, who just a few days before had been a kindergartener, was still in his mismatched pajamas.

“I always want you to lie down with me,” he told me. “But I’m not always in the mood for you.”

This is the wisdom of my son, the deep thinker, who can hold two contradictory thoughts in his head at the same time. Throughout his kindergarten year, he was in a protracted process of pulling away from me. It came earlier than I expected, but it didn’t surprise me.

This little person who once existed inside me, who once derived all his nutrients from me, who once couldn’t sleep without me, is moving on, as he should be. And I’m heartbroken.

My son was fair and bald as an infant, a sharp contrast to me with my dark mop of unruly curls. When we left the house, I almost always had him strapped to me in a baby-wearing contraption. I liked to kiss the top of his head as he slept burrowed into my chest. One morning, I was wearing him at a work event, gently swaying side to side, as I directed volunteers to their designated spots.

“Enjoy that,” a volunteer said to me. “Mine won’t even let me kiss him anymore.”

A sudden chill ran through my body. I knew her son. He was a teenager and seemed sweet. Of course, our kids grow up, of course, our kids differentiate from us,  but I didn’t want to think about that then, a small human still attached to me.

My son and I had bonded instantly and easily. I had not been so lucky with his older sister. My daughter was born after a complicated pregnancy and difficult labor. In the weeks following her birth, I was baffled by her and all the crying she did. She made me a mom, but she also scared me. Three years later, it was different with my son. He came into the world through an unplanned — but routine — cesarean operation. As soon as the delivery nurse could, she swaddled my little boy and pressed his cheek against mine. I was smitten, full of gratitude and wholly bonded.

My son and I spent the next three months practically fused together. We shared a room and a bed. My husband slept in the guest room so he could get a full night of sleep and be up with our toddler during daylight hours. For better or worse, I had chosen to prioritize breastfeeding while I could, which (for me) meant nursing-on-demand, co-sleeping and setting my schedule — if you could call it a schedule — around a small, erratic person who communicated his needs through quiet, plaintive cries that never rankled me the way my daughter’s had.

Once I returned to work, my son and I went our separate ways most days, but we still spent nights together for the better part of two years. I missed spending nights with my husband, but my son couldn’t sleep for more than four hours at a stretch until he was twenty months old. It was easier for all of us for my son and me to sleep together in the guest room. In time, I complained about the arrangement, but in truth, there was something satisfying and comforting about sleeping with a small person jammed into the crook of my arm, or with his cheek pressed up against mine the way it had been in the delivery room the day he was born.

As my son became more verbal and grew into his personality, I noticed something new about him: his need for closeness while he slept was the only thing we shared in common.

While I could anticipate my daughter's thoughts and needs, my son seemed to be motivated by desires I couldn’t relate to. He was becoming a carbon copy of my husband, the way my daughter had turned into my “mini-me.”

As he grew, my son became even more foreign to me, and I became more attached to our nights together, just as they began to disappear. I moved back into my room. He and my daughter shared her room, their choice. For a while, we had our guest room again. Sometimes my son would go a whole week without squishing between my husband and me at four in the morning (which typically resulted in my husband’s retreat to the guest room). Then, just after he turned five-and-a-half, on winter break from kindergarten, my son requested his own room.

Although I was sad, I wanted to encourage this independence.

I know, logically, that these developmental steps are healthy, but that doesn’t mean they’re always easy.

The family spent that whole day turning the guest room into a space just for my son, but that night I found him in his sister’s bed. When I asked him what happened to his “big-boy room,” he told me it was for playing Nerf basketball, not for sleeping alone.

Now, I listen from the other side of the door as he and my husband play basketball in the room formerly known as “the guest room.” During the school year, the two of them found each other in all things sports related — Parent-and-Me-Soccer, sports video games, and English Premier League Football on TV. These are things I have trouble feigning interest in.

I realize this sounds selfish. I’ve been encouraged to cultivate an interest in the things he likes, but I’m one of those people who has trouble faking enthusiasm. I hope as he grows we will genuinely find something we both enjoy, but we’re not there right now. My son and my husband also play piano together, but, lacking rhythm and melody myself, that is something I’ve never known how to do.

I love watching my son and my husband bond, but it’s becoming apparent I’m losing my little boy.

We have tried mommy-son dates, with some success, but he currently has a clear preference for his dad. For Valentine’s Day this year, he made three crafts in an after-school workshop and gave them all to my husband.

When I lamented this growing distance to another mom, she assured me, “He will always need you,” but I didn’t find comfort in her words.

I know he’ll always need me. I still find him in bed next to me some nights, his shin mashed into my spine. And, like that Wednesday morning I was almost late for work, he still asks me to lie down with him, though usually, it’s at the worst possible moment. I know I’m needed, but, as Cheap Trick said in a much different context, I want to be wanted. I want my son to be “in the mood for me” all the time, or at least open to playing a game of Uno.

This little person who once existed inside me, who once derived all his nutrients from me, who once couldn’t sleep without me, is moving on, as he should be. And I’m heartbroken.

How Am I Going To Be A Mother To A Boy?

Why I Let My Son Believe In The Tooth Fairy

Fear Not The Empty Nest: A Mother's Reflection

If you like this article, please share it! Your clicks keep us alive!
Tags
my son
mothers and sons
motherhood
Kids
attachment parenting