Just When You Thought Sarah Palin Couldn't Get Any More Anti-Choice... 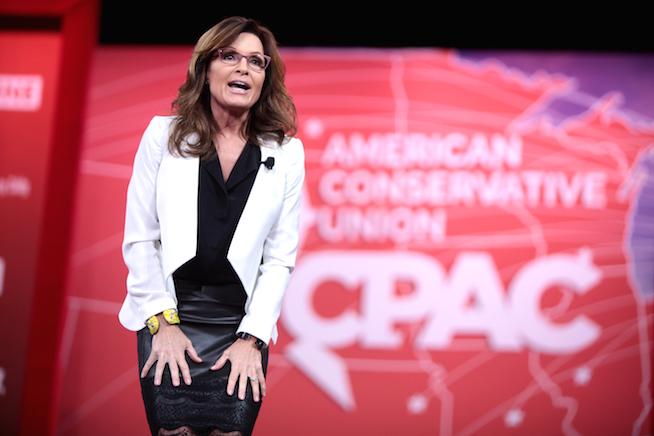 Ever since Trump pulled Sarah Palin out of cold storage to campaign for him, she’s been out there in the political arena, sayin’ all the things. This weekend, she took to CNN and fielded a question about Trump’s recent statements about abortion, wherein he suggested that the official Republican platform should include room for exceptions to an all-out abortion ban in the cases of rape, incest, or risk to the life and health of the mother.

Mrs. Palin disagreed with that idea. Brow furrowed with deep concentration she said:

“I don’t want the platform to change, no. That culture of life, that will be built upon the pro-life views that the majority of conservatives and Republicans hold, respect that, I, there’s, I don’t think that there’s a need for that to change. But when it comes to abortion, it’s very sensitive. It’s very, uh, it’s such a personal issue, um, I think that the plank in the platform is the way it should be, and I respect and support and want it to stay that way…”

There was no follow up question to see if Mrs. Palin actually knows what the Republican platform says about abortion at this time. (Imagine that dialogue: “Have you ever read a party platform, Mrs. Palin?" “Oh yeah. All of them. Whatever platform they put in front of me.”) Just for kicks, I did read the section of the 2012 GOP platform on abortion, and here’s what it says:

“Faithful to the 'self-evident' truths enshrined in the Declaration of Independence, we assert the sanctity of human life and affirm that the unborn child has a fundamental individual right to life which cannot be infringed. We support a human life amendment to the Constitution and endorse legislation to make clear that the Fourteenth Amendment's protections apply to unborn children. We oppose using public revenues to promote or perform abortion or fund organizations which perform or advocate it and will not fund or subsidize health care which includes abortion coverage. We support the appointment of judges who respect traditional family values and the sanctity of innocent human life. We oppose the non-consensual withholding or withdrawal of care or treatment, including food and water, from people with disabilities, including newborns, as well as the elderly and infirm, just as we oppose active and passive euthanasia and assisted suicide.”

A human life amendment. Also known as a personhood amendment, this would be a change to the Constitution that would enshrine the individual liberties of fetuses in our code of law. This notion is extremely legally, morally, and ethically problematic. But Mrs. Palin says it’s just fine. No changes needed. It’s the way it should be.

Mrs. Palin also says she has no interest in being Mr. Trump’s running mate. And to that, those of us who support reproductive rights say a hearty, "THANK GAWD."

If you like this article, please share it! Your clicks keep us alive!
Tags
Sarah Palin
donald trump
anti-choice
abortion
reproductive rights