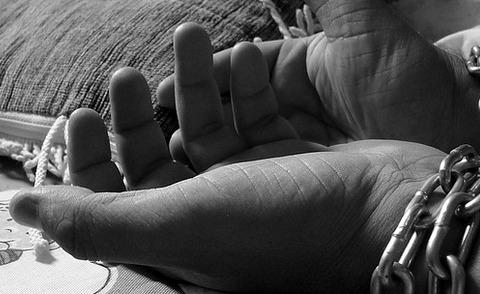 While America has served as a beacon of hope, freedom and a slew of other elusive euphemisms for political asylum and capitalistic wet dreams, it's also home to plenty of nightmares. Amid a glittering facade of free speech, democracy and equal opportunity for all, there lies perverted pockets of corruption and depravity that make us want to crawl into a bunker and let the whole damn world implode on itself.

But because we're not a crop of evasive ostriches who stick their heads into the sand every time something painful, frightening, or fist-making comes along, we thought we'd take this fine fine Wednesday and discuss sex trafficking in the United States.

Last year, investigative journalist Kate Mead told the harrowing tale of Chong Kim, a 19-year-old woman sold into sex slavery in the hot heart of Nevada by a man she thought was her boyfriend to the filthy hands of Russian gangsters.

For two years she was systematically raped, tortured, drugged and beaten inside squalid warehouses and hotels alongside dozens of other women and girls — some as young as seven — before she beat the system and escaped.

They all had one hour to spend time with us but most of the time they didn’t spend the whole hour, they just came in, raped us and then they would leave. And then we had to shower for the next client. That was pretty much our day. One time, I could hear the screaming on the other side of the hotel room and I could tell another girl was being raped and she was screaming and it was really, really hard for me to concentrate. And when we got done throughout the day we would get so sore that I remember asking for a bag of ice and had to put it between my legs because it hurt so much.

I tried to escape numerous times. I remember one time the warehouse truck stopped somewhere and we had to get out to get changed and use the bathroom and that’s when I started running. We were in the middle of the desert and I didn’t know where I was. The next thing I knew, I had what I think was a crowbar hit me in the back of the head. When I woke up, I was tortured. I was on a meat hook and beaten like a piñata. Other times they would bust both my knee caps or they would put me in a tub of ice naked. — Chong Kim, now 38.

I turned into a puppet, I got tired of fighting back. There were moments where I asked for help and nobody helped me. The traffickers would say, ‘see you are nothing, that is why nobody is helping you’. I learned about the corruption — there were politicians, judges, police officers that would buy a girl and pay the agency to keep quiet. It scared me so much that I decided I need to run away.

While staying with a wealthy client in a casino hotel in the heart of Las Vegas, Chong decided this was her chance to flee.

I remembered watching a James Bond movie with my father and he’d crawled out through the vent to escape. I remember the vent being big enough and I thought ‘you know, it’s worth a try!’ My heart was beating so fast. I got in the car and took off my Stiletto shoes and beat him over the head. He was unconscious, I didn’t kill him. And I moved his body out and I stole his vehicle.

Chong has gone on to work with the FBI to try and track every last one of those twisted motherf*ckers that were running this sex ring, but many of them are long-gone and too-clever in their cover-ups to ever prosecute. Two similar cases have cropped up just this week — one in Denver and Minnesota — reminding us the struggle is far from over.

Joe Avalos has been charged with 17 counts — including prostitution, sexual assault, contributing to the delinquency of minor, kidnapping a 16-year-old girl who lived with him and perhaps the dreamiest of all, providing drugs (like meth!) to young women in exchange for having sex with strangers. Prosecutors say the five women in his trafficking ring ranged from 15-20 year old and operated right out of his home in Arvada, Colorado.

Meanwhile over in Minneapolis — which boasts some of the highest numbers of child prostitution in the U.S. — the Gerald Vick Human Trafficking Task Force  just completed a straight-up sting. Undercover cops placed some ads on Backpage.com for escorts and — shocker!— the phones started ringing off the hook. 90 seconds after the ad went live.

The St. Paul police also reached out to women listed on Backpage that seemed underage. What's particularly tricky about this situation is the legislation — the Safe Haven Law. Girls under 18 are considered "victims" and aren't prosecuted for prostitution, but women older than that — including two women recently rescued following the sting — could have been arrested and jailed. But the St. Paul police decided against it.

We don't intend to arrests these girls. We want to connect them to services and get them out of the lifestyle that they are in. — Undercover St. Paul cop

St. Paul Police say one out of ten women they make contact with is underage.

I would view it as modern day human slavery...If you got runaway kids in your community, you've got this issue. — Ramsey County Attorney John Choi.

Choi explained that every woman who's willing to share her story of abuse will further the momentum of putting these beasts behind bars; this past January the local attorney's office achieved the longest sex trafficking sentence in Minnesota history, sentencing Otis Washington to 40 years in prison for trafficking.

And if I haven't succeeded in ruining your day and/or scaring the sh*t out of you yet, here's a helpful round-up of pant-sh*ttingly awful statistics from the Washington State Office of the Attorney General:

Stay strong sisters. We're in this together.