Never too Young to Shoot: How the NRA Teaches Kids to Love Guns 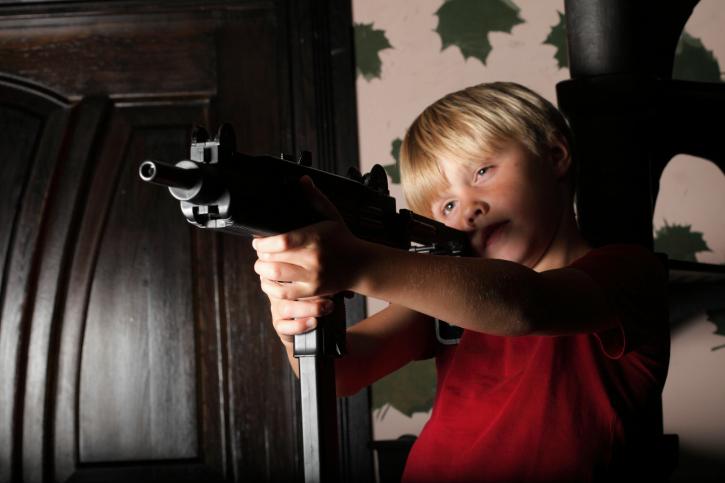 His name is Eddie Eagle. He's a good-natured, giant bird that kids adore. His mission: Teach children about guns. Eddie is one of many tactics employed by the NRA to indoctrinate the youth of America to the joys of packing heat. The result of such measures? Stomache-sinking facts like these:

The United States accounts for nearly 75 percent of all children murdered in the developed world. Children between the ages of 5 and 14 in the United States are 17 times more likely to be murdered by firearms than children in other industrialized nations.

In terms of accidental fatalities, American children younger than 15 are nine times more likely to die by a gun accident than those in the rest of the developed world.

Here's an inside look at the role the NRA has played in helping to make these chilling numbers a reality.

OK, so Eddie Eagle is technically a character designed to teach kids about gun safety. But as critics have pointed out, a more apt description for this mascot is "Joe Camel with Feathers." According to the Violence Policy Center:

The primary goal of the National Rifle Association's Eddie Eagle program is not to safeguard children, but to protect the interests of the NRA and the firearms industry by making guns more acceptable to children and youth. The Eddie Eagle program employs strategies similar to those utilized by America's tobacco industry—from youth 'educational' programs that are in fact marketing tools to the use of appealing cartoon characters that aim to put a friendly face on a hazardous product. 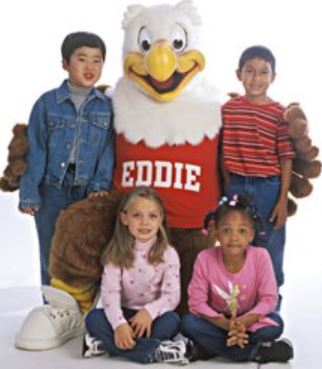 A study published by the American Academy of Pediatrics revealed that Eddie Eagle is ultimately ineffective in getting kids to avoid guns. Yes, children can remember what the bird tells them—which basically boils down to "Don't touch, tell an adult"—but when placed in real-life scenarios and asked to role play, not one child in the study successfully applied what they learned. The "no, duh" finding? No matter what you tell kids, when they see an easily accessible, unlocked gun, they're going to want to play with it.

Meanwhile, Eddie has been used as a lobbying tool by the NRA to prevent legitimate child-safety regulations from passing, including mandatory trigger lock laws, according to the Violence Policy Center.

Still, the bird maintains a powerful presence in classrooms. By the NRA's count, since 1988, the Eddie Eagle GunSafe program has been taught by more than 26,000 schoolteachers and reached over 26 million kids in all 50 states. This, of course, is great news for the NRA, which not only benefits from putting a happy face on gun-toting, but profits handsomely from the program itself. In 2003, when Ohio became the first state to appropriate funds to teach the program in schools, it gave the NRA a cool $40,000. According to the NRA website, the Eddie costume alone is $2,800.

Never mind that the American Academy of Pediatrics recommends that "[b]ecause even the most well-behaved children are curious by nature and will eagerly explore their environment, the safest thing is not to keep a gun at home." So long as Eddie keeps laying those golden eggs, he'll be the NRA "safety" measure of choice.

At least Eddie has an ostensibly noble aim. Harder to defend is the NRA's tradition of setting aside a day during its annual conferences expressly for kids. At this April's Indianapolis conference, when children participated in the innocuously named "Youth Day" (which—surprise, surprise—media was barred from attending), they enjoyed cattle roping, derby races and a series of gun-themed games. Among them were the NRA Sports 3 Gun Experience and a scavenger hunt to visit the booths of various gun makers and—you guessed it—friendly Eddie Eagle himself.

Afterward, families gathered for an ice cream social and a prize giveaway, with "lucky" tykes taking home a rifle and a shotgun made by Weatherby, a gun manufacturer and one of the event's sponsors. Oh, and kids were offered free six-month NRA youth memberships. Last year's event, held on the heels of Sandy Hook, was staged a day after the NRA welcomed its youngest lifetime member: a 3-year-old.

Hey, the NRA is nothing if not shrewd, and it clearly recognizes the value in recruiting from a young age. And with that, let's reiterate some facts:

The United States accounts for nearly 75 percent of all children murdered in the developed world. Children between the ages of 5 and 14 in the United States are 17 times more likely to be murdered by firearms than children in other industrialized nations.

In terms of accidental fatalities, American children younger than 15 are nine times more likely to die by a gun accident than those in the rest of the developed world.