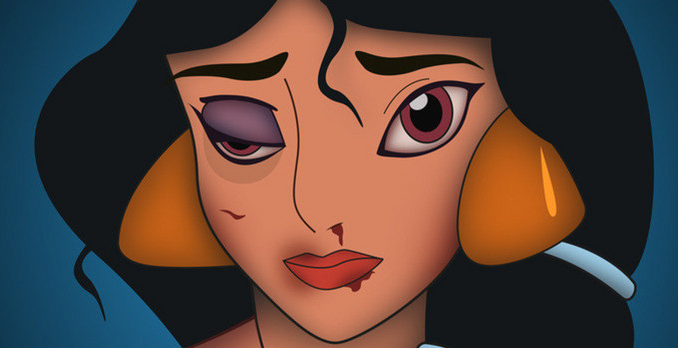 The Disney princesses are back . . . only they aren’t looking their fairy tale finest. In fact, they’ve never looked worse—they’re bruised, bloodied, and bludgeoned. And it’s all because of mysterious, Middle Eastern artist Saint Hoax and his aptly named campaign, "Happily Never After."

In what have been referred to as “shocking” images, Hoax has recast some of Disney’s leading female royalty as harrowing abuse victims; from Ariel and Sleeping Beauty to Jasmine and Cinderella, they all have black eyes, cuts, and swollen faces. The caption on the bottom of each image? "When did he stop treating you like a princess? It's never too late to put an end to it."

Why sully the iconic princesses?

By portraying Disney princesses as victims of domestic violence, I’m proposing the idea that no woman is safe from being emotionally, physically, or sexually abused.” A statement that is, sadly, very true. Using elements that are culturally relevant always helps to get a message across. People are emotionally attached to these princesses. Portraying them in a position of weakness stirs a lot of emotions and mixed feelings. Especially because these princesses are part of everyone’s childhood. — Hoax told Buzzfeed.

On the charges that the images are “shocking,” Hoax said: “I think the act of domestic violence itself is shocking.” And we have to agree. Perhaps the only thing more shocking than the act itself itself is its ongoing prevalence. A woman in the United States is assaulted or beaten every 9 seconds. Domestic abuse is the leading cause of injury to women—higher than car accidents, muggings, and rapes combined—yet it is chronically underreported, due in large part to the tremendous shame surrounding it.

It’s this very stigma that Hoax claims his art is attempting to combat, openly urging victims to report their cases to authorities and help stop the cycle of violence.

And while the Disney princess trope is a bit tired and perhaps more than a little problematic (the “when did he stop treating you like a princess?” comment is certainly loaded, reinforcing traditional gender roles and that whole, "women-need-men-to-feel-complete" notion), we have to agree with Nicole Worthington of the Community Action Stops Abuse organization who says “anything that brings attention to domestic violence and gets people talking is a good thing.”

Especially since, based on reports from 10 countries, 55 to 95% of women who’d been physically assaulted by their partners never reached out to police, shelters, or NGOs for help.

“Happily Never After” is a follow-up project to Hoax’s other controversial series: the “Princest Diaries,” which is equally as disturbing—and poignant, depicting Disney princesses being forced into sexual embraces by members of their family. It’s yet another awareness campaign targeting minors who’ve been sexually abused by family members. The bottom of these posters say: “46% of minors who are raped are victims of family members. It’s never too late to report your attack.”

Hoax plans on launching a campaign targeting men who may be suffering from domestic abuse as well; as his current work has sparked a number of conversations with experts in the domestic violence field, he’s realized that victims can be of any sex and background.

As recently demonstrated by soccer star Hope Solo, women are more than capable of perpetuating physical violence, too. And just for the record? We're not down with any of it.

If you like this article, please share it! Your clicks keep us alive!
Tags
disney princesses
domestic violence
incest
abuse
Saint Hoax