"The Duggars have been using their fame to promote discrimination, hate, and fear-mongering against gays and transgendered people. You need to take a stand on the side of justice and cancel their show."

These are the words of a powerfully worded Change.org petition making the rounds today, and which had—at last count—more than 91,000 signatures to its name, well on its way to the desired 100,000.

The petition is the latest challenge to the controversial Duggar family, the clan behind the wildly successful reality TV program 19 Kids & Counting. The family, which has also faced claims that it promotes patriarchal abuse, is being taken to task for actions it's taken against the LGBTQ community. The list of abuses includes a robocall matriarch Michelle Duggar made against an anti-discrimination housing law; the family's decision to delete a photo of a gay couple kissing from its Facebook page; and son Josh's involvement with the anti-gay Family Council Research Council legislative group, FRC Action.

The petition is persuasive, powerful and potentially very impactful. Indeed, its significance goes beyond 91,000 signatures . . . and counting. 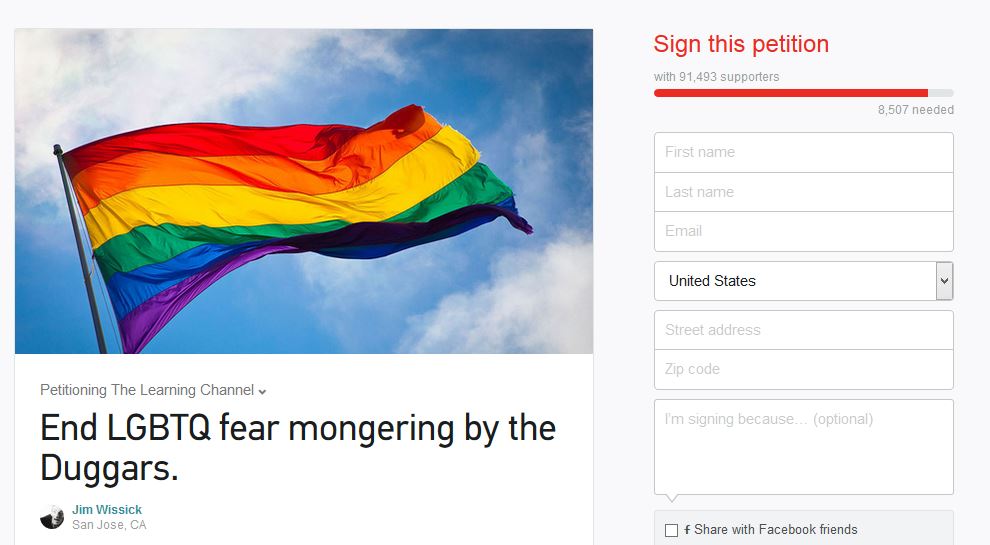 It's important to note that 19 Kids & Counting doesn't belong in a vacuum, and in this case, context is everything.

Indeed, the show belongs to one of reality TV's most trusted cannons—shows about ultra-conservative, Bible-thumping Southerners. Other programs of this ilk include two of the most successful on TV, Duck Dynasty and the recently canceled and controversy-embroiled Here Comes Honey Boo-Boo (which, though its characters aren't all that explicit with their political or religious beliefs, was once aptly described by The New Republic as "a lazy liberal’s stereotype of Southern whites"). Even Sarah Palin's Alaska—remember that show?—fits the paradigm, but with a different "backwoods" setting.

Here's an illuminating passage from a story in the uber-conservative Washington Times:

"Honey Boo Boo and her fat clan is what liberal Northeast and West Coast elites think of most Americans—especially Southerners and rural people. That is because in their vast and cloistered ignorance they have never met any normal Americans nor traveled past the Potomac River. They have never been to a rodeo."

The same story also ripped into the media's treatment of Duck Dynasty:

"All the while, the Robertsons have remained faithful to their roots, traditions and, most importantly, their religion. In other words, they are hate-filled racists, according to establishment media."

The sharply titled "Duck Dynasty Must Make Liberals Crazy," from the conservative pub American Spectator, is similarly defensive and accusatory:

"What’s a liberal to do? A God-centered, traditional family that hunts is now explosively popular across the country and among the younger generation. Maybe they can call those Jersey Shore folks and see if they want to come back to give an impressive demonstration of what booze- and sex-centered lives look like."

Often, as the passage above makes clear, these cultural wars are steeped in religious debate; conservatives are keen to accuse liberals of religious discrimination if they mock one of these programs or challenge the views they espouse. And no show embodies this element more than 19 Kids & Counting, a program in which extreme religious beliefs are as much a character as any of the myriad kids. This is a family that won't allow kissing until marriage, is overtly critical of abortion (daughter Jessa once compared it to the Holocaust) and—hence the very existence of the show—eschews the use of birth control.

These religious beliefs are also, of course, at the heart of the family's LGBTQ hate—which means the petition, too, fits within this broader cultural context.

In the culture wars being waged vis-a-vis reality TV, what's being confronted is the very notion that Southern conservative religious beliefs protect hate speech and actions. And while I agree that some liberals have at times breached ethics in judging and mocking a group of people they don't actually know much about, the fact is, hate speech and actions don't deserve this protection. This is the broader and very significant point of the petition. And it makes signing it worth a whole lot more than the cancelation of a TV show.