What Satan Taught Me About Social Justice 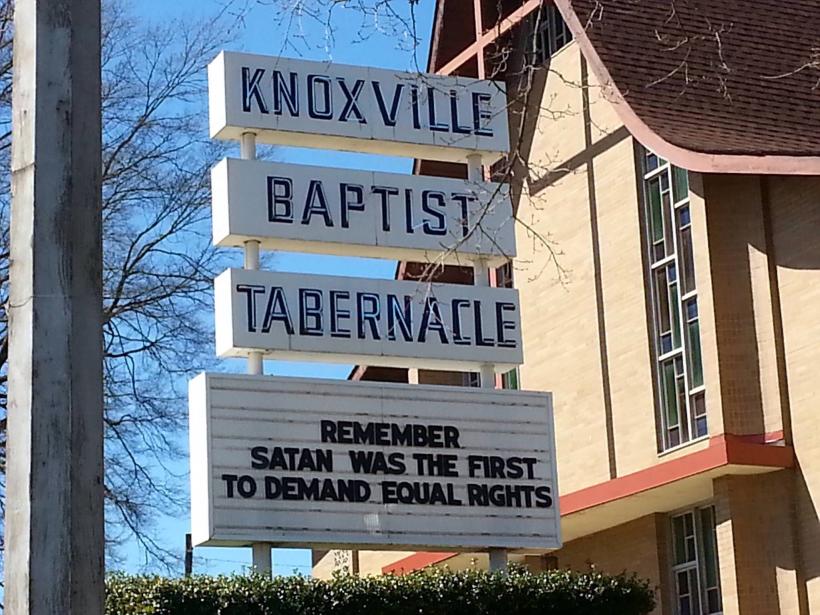 credit: Imgur (no user name given)

If violence occurs with or without God’s (perceived) consent, then it stands to reason that the constant tying it all together is our cruelty.

As a child, I did not have a friend in Jesus. A friend is someone who trades their pudding for your trail mix at lunch; I was so scared of Jesus that I learned to sleep with the lights on. In all the films they showed us at Sunday School, Jesus never knocked or called you beforehand. He just appears while you’re distracted with something else. Like sleeping. Or telling his dad you’re sorry for the impure thoughts you entertained instead of sleeping.

If Jesus thought I was asleep, he might ambush me. Then he’d be all “build a boat and tell everyone in the third world that I’m a great guy,” and if I was like “I’m eight,” then his dad would turn me into salt or send fish to eat me.

In school, we drew little happy pictures of Noah’s Ark. We held hands and sang “I’ll Be A Sunbeam.” We took some beans and franks back to our seats, where receipts of our borrowed time were lovingly etched in secondhand crayon.

We knew all of this could end—that if someone stuck their pee pee in a fudge brownie or talked back to their parents, everyone could die.

I grew up a soldier’s daughter—I got to tour the insides of killing machines, and ate my dinner to the accompaniment of stories that cost me drinking companions if I retell them as an adult. Once I ran through the multiplication tables, the quizzing on fighter aircraft began. Metallica’s One is for most a cautionary tale of war’s senseless butchering of young men’s bodies. For my father, it was something to aspire to—we should all deign for the opportunity to sacrifice our limbs, our eyes, our ears to protect America from someone, somewhere. They’re probably in that hospital over there. Pew pew.

A once-consuming terror of an omnipotent oppressor killing us all in a tantrum and feeling no remorse fizzled into a resentment of his indifference to our barbarity, much of which was committed in his name.

Quoth Steve Buscemi in Spy Kids 2: “Do you think God stays in Heaven because he too lives in fear of what he’s created?”

We are told the primary offense of Satan is that he refused to serve mankind. A cursory review of my Twitter feed on any given day affirms this career suicide wasn’t unfounded.

God didn’t write a book encouraging parents to inflict corporal punishment on toddlers. God didn’t choke Eric Garner to death. God may have told Leelah Alcorn’s parents to drive her to suicide, but God also tells my friends to love people as they are without reservation. If violence occurs with or without God’s (perceived) consent, then it stands to reason that the constant tying it all together is our cruelty.

I found Satanism not as a rebel, but as a skeptic of the plan. To say that a young child dying of cancer is part of “God’s plan” is reasonable to comfort a mother in pain, but when it’s used to write off widespread systemic violence against marginalized people, it becomes oppressive.

We are all subjected to the shame of Satan when we don’t follow suit—the greatest and gravest offense in a Judeo-Christian society is to defy the status of your birth. We donate money in the hundreds of thousands and erect billboards to thank police who murder black folk. We ridicule the people who make our food, and then cry for their unemployment when they demand a living wage. We get hyped on a baby’s gender and then, years later, if they try to live outside that gender, we shame and humiliate them into conforming. All of this is done under the guise of “this is the way things are.”

I read The Satanic Bible not for insights on how to blow the minds of soccer moms, but for guidance; can you fight for justice and liberation while believing people are violent and untrustworthy? Can I in good conscience stand by the rights of people who have the same darkness of their oppressors?

You could argue that the other Bible, the Biblical Bible, Bible Prime if you will, has wisdom on this subject—but it is all delivered with the central conceit that in all things, you must always be obedient to God. I am grateful for what holding the gracious godhead in mind has done for all my friends and loved ones—but I can’t accept struggling to free myself and others from the bonds of society just to remain bonded to an entity I can’t touch or taste.

LeVayan Satanism is the ultimate “get off my lawn” religion. The 11 Satanic Rules tell us not to harass people in public, not to give advice when it isn’t asked, and not to complain about shit that you don’t need in your life in the first place. It also explicitly condemns child abuse, sexual violence, and animal cruelty. We are warned against reaping the benefits of Satan’s teachings (magick) without affording proper attribution of credit. But we are not instructed to obey or subject ourselves to challenges beyond our perceived abilities.

LaVay would go on to say his brand of Satanism was indistinguishable from Ayn Rand’s philosophy. In my movements within Luciferian leagues, I found a lot of insufferable shits who took the “leave me to mine” attitude not as the right of all people, but as an affirmation of indifference to the suffering of others—white people of relative means and mobility withdrawing from an unjust society they participated in and benefit from, regardless of their perceived isolation.

A white farmer in fucking nowheresville who won’t pay his taxes is afforded more respect and mercy in our society than the people of color who live in dilapidated apartment buildings and make our food. There are a lot of budding Clive Bundys in the church of “I got mine.”

I believe “do not take that which does not belong to you unless it is a burden to the other person and he cries out to be relieved” includes colonialism, racism, misogyny, classism, ableism, and transphobia. I believe “do not harm little children” includes resisting the school to prison pipeline.

It’s all good for us for to assert a right to be untethered to society if we don’t want to be, but if we use that isolation to perpetuate systemic oppression of others by assuring ourselves that if the oppressed want justice hard enough, they’ll fight for and attain it themselves . . . isn’t that just another “plan”?

I am made less free by the injustice and confinement of another—it asserts that one’s mobility is tied to how much money you have, the color of your skin, your gender, whether or not you have the right papers. I am made less prosperous when others do not pitch in their fair share to maintain the society that nourishes us in some way, even if we feel ourselves beyond it.

(Psych! You thought I was gonna come out as a Libertarian. Satan would've been a socialist.)

If Lucifer is the bringer of light because he refused to submit to God or mankind, then to follow his example is to defy anyone who imposes violence on someone they deem a “lesser class” of person.

Social justice should have room for selfishness—people aren’t racist out of the goodness of their hearts. We are infantilized by the the image of the compulsively benevolent.

I don’t believe in heaven. Or hell. When I die, I hope my body will dissipate and return to the earth. I want to be flecks of seafoam cast against the fjords. I want to be the air that carries a hopeful prima donna’s first aria.

Think of that last spoonful of a $15 ice cream sundae. You enjoyed such a lavish dessert—but you also enjoyed that it’s over, now.

There’s no towering ice cream sundae awaiting me for all my good deeds. I’m eating the sundae right now. Justice is the reward of those who fight for it—whatever their reasons.

I’m grateful for this heaping dish of joy and indulgence. Seeing what I’ve seen, knowing the heights of generosity and wickedness that dwell in each of us, I’ll also be grateful for when I’ve cleared my plate.

If you like this article, please share it! Your clicks keep us alive!
Tags
Satan
Satanism
religion
God
social justice
essay