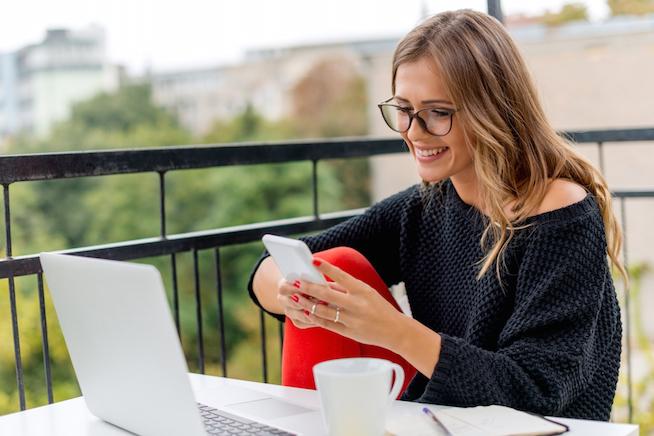 Don't swipe right too many times...you'll be sorry.

Meeting people in real life doesn’t actually work, unless it does, in which case, try anyway...

I am a heterosexual woman looking for a relationship with someone I am attracted to, has a sense of humor, and isn’t a serial killer or too depressive. Someone that hopefully doesn’t have children, lives within…three hours of me, doesn’t think that monogamy “just isn’t natural,” and wants to date me, maybe even forever. That’s basically all I am looking for.

As you can see, I am not even asking for that much on the mental health end, but it’s proven to be pretty difficult and not for lack of trying. I have done a lot of dating. Sometimes with resistance, sometimes enthusiastically, but either way I’ve done a lot.

My dad asked me how online dating works. “Is it just through Facebook, or…?”

I explained dating apps, but the truth is, Facebook is a perfectly acceptable and sneaky way to stalk and start talking to someone.

No one really needs to ask anybody out anymore, or be clear with their interest, because Facebook messaging exists. You just say “You’re on Facebook right? I’ll find you!”

If they don’t have Facebook, you will probably never see them again.

But if they do, you can friend them right then and there. This is so chill, I’m just casually becoming your Facebook friend with no other thought in my head.

If he likes you, he will probably message you within the next 24 hours. But if not, you start messaging, girl! Sometimes you need to hit them over the head with some animal emoticons. Start off by saying something casual like: “I love that old profile picture of yours from 2012. Where was that? The Great Wall of China?”

If he is interested at all, he will respond and you will hold a conversation. If he doesn’t respond, you can assume he doesn’t like you or has a girlfriend. You can leave well enough alone or you can send a few more: “Hello?” Hello?! Is it the Great Wall of China or not?!” And if he never responds, you can kick yourself and remind yourself to never do that again.

If you do start talking, you’ll notice that Facebook messaging is arguably just modern dating. Neither of you are going out on a limb at all, and in no way is it expressly romantic, because it’s not a dating app, but if it is promising, you will probably cover topics that normally cover date one and date two.

Don’t worry about the fact that you won’t actually like him once you guys actually meet in person and he tells you that his plan to live in a van and travel across the country until the government tracks him down — for now, enjoy the romance.

(Word to the wise: If he doesn’t respond and hold a conversation, DO NOT ASK HIM OUT. I repeat. DON’T. IT WON’T WORK.)

Your mom will try to tell you that online dating is weird. And she is right. But it is also extremely normal — weird and normal. Even funny and smart people are on dating apps these days, or so I’ve heard.

Word to the wise: Do not be generous with your “likes” and “swipes right.” You will regret it. Be discerning. Be picky. Be judgmental. Because if their picture creeps you out, they are going to creep you out. If they look douchey, they are douchey. If they look dumb, they are dumb.

And it is important to judge a book by its cover.

Dating apps are actually a sort of part-time job, which is another reason why you need to be choosy. You will be frustrated if 30 people you are not actually attracted to are asking you to explain your Internet business to them.

Also, if they say “Just looking for an active girl I can exercise with,” be wary. Do not expect them to understand anything about you, or buy you cookies, and be understanding of your potential future baby weight.

You will also experience acute dating app burnout, which is why I recommend quitting every two to three months and loudly exclaiming to the sky “I AM QUITTING DATING APPS AND DATING AND MEN! I’D RATHER BE ALONE!” Get it all out. Take a break. You’ll be back next month when you’re coworker gets engaged to that guy she met through Tinder.

Meeting people in real life doesn’t actually work, unless it does, in which case, try anyway. The biggest difficulty is that the normal people you want to be dating are not the ones who proposition people in coffee shops. The ones you want are the ones smiling and not saying anything because they don’t want to bother strangers. But keep dreaming, sister.

Meeting friends of friends is probably best, if you can muster it. Then you can try Facebook messaging them.

Meeting people at parks seems great (because you’ve seen it in movies), but once the guy is actually talking to you in the park, you’ll realize how weird it is.

Same goes for coffee shops, and on street corners, and at the drycleaner.

Oh you live in this area?

Well golly, would you like to get a soda and talk about that new park they are building?

And you’ll live happily ever after. It’s happened to someone, somewhere, I am sure. Don’t give up hope!