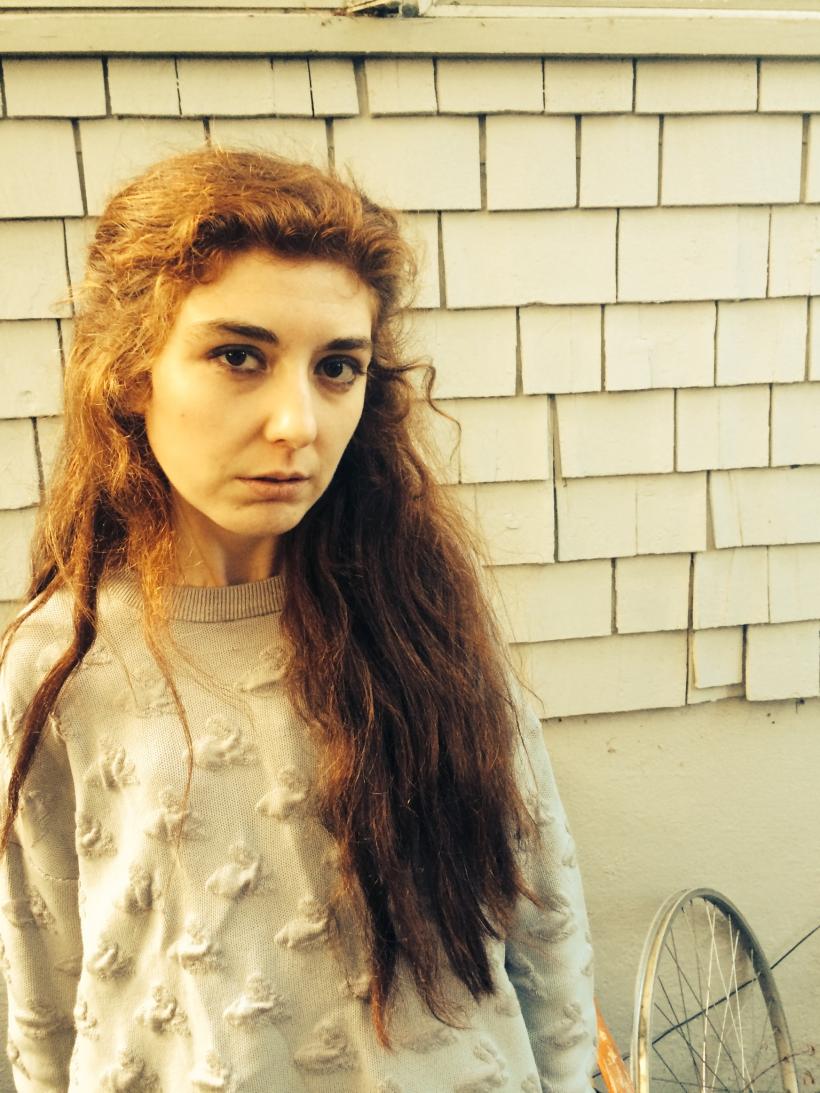 Alexandra Naughton and I first met about two years ago when I was writing a piece on foot fetish for The Bold Italic—it's not one of her "things" as they say, but she had seen my call-to-arms on Yelp for potential subjects and had a strange foot story to tell; we met at the Madrone Art Bar on Divisidero to talk toes, writing, and why the Bay is so wonderfully odd after a lifetime of being an East Coaster. (She's from Philly; I'm from New York.)

I didn't know it then but it was the beginning of a beautiful—but digital friendship—where I could witness firsthand her sprawling indie-dark darling influence on the World Wide Web. Her steady stream of Facebook statuses casually garner 85 'likes' and inspire a throng of heady comments; her comments are alternatively witty, honest, perceptive, self-deprecating, knowingly narcissist and sexy—in short, it's a persona that's an internet wet dream.

By day, Alexandra helps run what I can only understand as a kind of modern day Elks Club in San Francisco—by night however, she's a bona fide whirlwind of literary exploits. She's founded her own literary zine and publishing "house" Be About it! in addition to her own blog —Tsaritsa Explains It All—which delves into everything from social commentary to art, to hip-hop, sex and books. Oh, and she's also launched a reading series, and recently published her first collection of poetry, I'll Always Be Your Whore [Love Songs for Billy Corgan] with Punk Hostage Press in January.

On the cusp of her book tour where she'll traipse across ten cities in ten days, we sat down in her North Oakland apartment—finally face to face again after two years—and talked about the sheer joy of being published, why she hates poetry and obsessive love.

Of course I have to ask about Always Be Your Whore—the title alone is a pretty intense statement. What are these poems wrestling with?
It's all about obsessive love and sadness. There's this looming figure whose central to the poems—it's not Billy Corgan, but it can be.

Basically I was obsessed with being obsessed. And when I was writing these poems, I totally indulged that obsession. I was like, really fucked up for a few months. It all started off as scribbles in my notebook—and with some of [the poems] you can still feel and see that rawness happening. It took more than a year of writing, although I was not encouraged by the person I was dating at the time to publish a book. He said, "you aren't ready."

But you decided you were.
Yeah, once I started editing them and putting them in the computer, it really started to feel like something. I submitted it to one publisher and was told they were looking at it but never heard anything back. So I sent a Facebook message last September to Kimberly at Punk Hostage Press, asking her who I should talk to about submitting this manuscript ... and they were really into it! [Laughs.] I was like, 'wow! That was super easy!'

What was it like seeing your book get published? Does it feel surreal? I have this image of seeing my first book in print and I always imagine it's going to be this like, na-na-na moment when I first pick it up in my hands.
It was super weird the first time I saw it. It wasn't even my copy actually, it was one that had gotten ordered on the internet by a friend of mine—he was the first one to bring it over and showed it to me. I just wanted to touch it and smell it. It was truly absurd.

Did you freak out about how it was all going to look?
Nah, I i didn't care about the font or anything like that—I'm not that way. I did send them collages I had made prior to submitting it. And the way it looks on the page is important. We went back and forth with probably did twenty different versions.

So as a fellow writer I'm always curious about other writer's artistic process. Are you a "I always sit down and write for three hours on Sunday" type of gal or does it come in bits and pieces....
I carry around a notebook and I try to remember to write stuff down when I'm thinking about it. I almost lost this idea for a poem about Yogi Bear—I was thinking about it walking to the train and it completely slipped my mind by the time I got there. But I was thinking about this scene in Yogi Bear where Cindy Bear is being fought over...I've been thinking about that a lot. It's a kind of fantasy of mine that people might fight over me. And I'm eating popcorn, watching it like a spectacle.

So Always Be Your Whore has been out for a while, but you're taking it on a book tour this summer—what's that going to be like?
Yeah, I'm going on tour with Jesse Prado—we met and became friends just from going to poetry readings around the Bay. We talk about poetry and writing for hours on the phone.  He writes short funny things that I can't really describe. He has a really dry sense of humor and I think his writing is very odd—I think we work well together and share some of the same feelings about writing. He kind of hates poetry and so do I.

What do you love and hate about poetry?
I love poetry when it's not "poetry" but when it's just language. I love the way you can change it—the simplest thing can be a poem—an interesting turn of phrase, the twisting of a cliche. That's my favorite kind of poetry—you say something or see something and its an interesting juxtaposition. I like taking "found poetry" like lyrics I mishear or something I overheard and use it as catalyst for something. You can put an intention on it.

But yeah. I don't like the snobs and snobbery associated with poetry. The cliquey hierarchy of poetry is bullshit.

So what's on your next horizon? Are you working on another poetry project or something different altogether?
I'm already working on something—this collection takes a more feminist slant. I got all this extra attention from boys on the internet (partially because of the book's title and whatnot) and it's weird and I don't know how to deal with it. I have a boyfriend but I'm trying to be nice and not just shut them down. I mean, they're not giving me dick pics but...I'm currently writing all these "Manic Pixie poems" about what it means to be a girl on the internet.

I have to ask. Do you consider yourself a feminist?
I am.  I'm a woman and I have a political point of view. I'm a feminist and that's in [Always be Your Whore] but this new collection is more overt in how I talk about it.

In the mainstream theres a void of [feminist discussion] but there's definitely a dialogue that's happening that I've been noticing for the past few years—like the queer world of feminism on Tumblr for example. Yes, really smart people are talking about these issues—like trans rights—but making it popular is different. That's going to be hard.

So what are you reading right now?
I just finished "Real Life" by John Rogers and I just got this. [She pulls out an advanced copy of Michael J. Seidlinger's "The Fun We've Had" from her backpack.] I'm trying to read more contemporary novels because I don't always lean that way. I love the modernist stuff. D.H. Lawrence, Hemingway. Sylvia Plath. A lot was happening during that time, language was really changing and so was the content. I like that the language is restrained and I have to imagine everything. Lawrence is super sexy! I have to re-arrange myself in my seat when I'm reading it.  [Laughs.]

Want to submit to Be About It? Want to send a love letter? Drop this badass bitch a line. Or buy her damn book, it's awesome.