10 Plus-Size Babes Who Use Fashion To Make Social Change 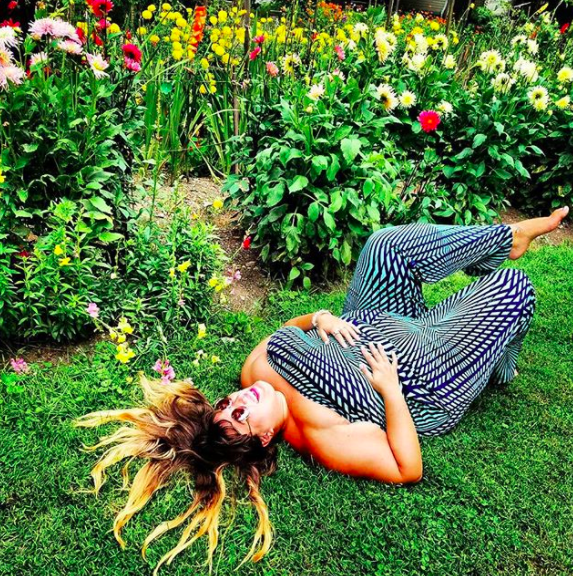 In honor of Fashion Week, Vogue's September Issue, and all the fun the comes with fall fashion, we'll be talking about plus-size fashion — otherwise known as "fatshion" — throughout this next week! Plus-size style boasts its own beautiful, unapologetic brand of contemporary fashion, and we've curated a range of writing that aims to capture both its political roots and unique aesthetic. Find the rest of the stories featured in The Fatshion Conversation here.

Fashion is often described as fickle and soulless by critics. While they aren't necessarily wrong, they aren’t right, either.

Most critics have not experienced the same world I have the privilege to be part of. Those critics have not seen the joy on someone’s face when they see someone with their same extra-extra large proportions walk by while baring their midriff, looking unphased by fatphobes and serving unbelievably fierce outfits and face.

They have not seen a woman in a wheelchair nearly silence a room as she enters — not because of ableist discomfort, but because of her absolute awe-inspiring ensemble.

Critics have never seen a non-binary person put on masculine-styled clothing that was cut for their breasts and hips, allowing them to comfortably exist within the same styles they have longed for in order to express their gender.

Style is not the enemy — it's the folks who leverage power against those who are perceived to not possess it. Clothing is not the problem, it is the industry which refuses to produce garments for larger bodies while exploiting millions of people around the world in sewing rooms and shops.

Fashion can be an easy “in” for discussing more necessary personal and political issues. These remarkable fashionistas utilize their style and space in the world to discuss difficult topics and fight for accessibility along the way. Diversify your IG feed with these fashionable activists and start having tough conversations with people around you.

I possess the power to become completely happy!! I am a #black #girl with a #disabilty that is filled with so much joy & pride! I am #unapologetically me!!! No one or anything can ever steal my joy!!! #winnging #disabledblackgirlmagic #meleninpoppin #blackgirlmagic #blackgirlsrock #disabilitypride #nmrk #accessiblehollywood #disabledandstylish #incinternationalconcepts #applewatch #model #actor #blogger #nofilter

An actress, model, and lifestyle blogger, Tatiana Lee also blogs from the perspective of a woman living (and thriving!) with Spina Bifida. You can catch Lee’s work on her own blog, Accessible Hollywood, and as a collaborative effort through the awesome Cur8able website which centers perspectives of people with disabilities from all walks of life.

STOP PRESS: I want to celebrate the launch of my Hair Elixir I have collaborated with the esteemed @captainfawcett , on my very own delectable and rejuvenating Hair Elixir. A golden and rarefied blend of four nourishing and smoothing base oils, Sweet Almond, Tomato Seed, #Argan and Broccoli Seed. Your hair is assured of intense nourishment whilst aiding cuticle repair. This simply spiffing hair tonic contains a rather spectacular blend of aromatic essential oils: West Indian Bay Pimenta Racemosa, Black Pepper Piper Nigrum, Labdanum Cistus Ladaniferus, Cedarwood Cedrus Atlantica, Cinnamon Leaf Cinnamomum Zeylanicum, Vanilla Vanilla Planifolia and Lime Citrus Aurantifolia. This incredible universal oil is ideal for use on both head and for those fortunate enough to be hirsute of chin... your beard hair. The Bearded Dame Hair Elixir: £28.00. Image - @iaincrockart

Harnaam Kaur is most recognizable for her strikingly full, luscious beard set against exquisitely feminine fashions. Kaur has dedicated her life to body positivity and speaking out against bullying after being targeted to the point of suicidality in her younger years due to hostility toward her facial hair growth from polycystic ovarian syndrome (PCOS). Today, she advocates body-positivity for all.

Getting my outfit together for a morning business seminar coming this Friday. I admit I had not even tried on the Crossover top that I designed, which is weird I know. So today I did and I was super pleased with how it looks and feels on me. I'm thinking this with my black pinstripe dress pants and black suede wedge heels, favorite sparkle earrings and I am in my confident biz network outfit! #successfulwomen #womeninbusiness #womensfashion #plussizefashion #merlot #designer #stylist

Fashion designer and visual artist Yabette Swank has based her brand Swankety Swank around a chic minimalist athleisure look that is also sustainable. Each piece is made from natural fabrics like hemp, soy, vegan silk, and reclaimed fabrics, reducing fashion’s carbon footprint. Swankey Swank is accessible for bodies up to a size 3x, with custom work available in larger sizes.

The brain behind  #thisiswhat400lbslookslike and the #FatAndFree campaign, Saucye West represents women who just want to live. She embraces the word fat and refuses to be bullied by fashion- and diet-industry standards, paving the way for dark-skinned models and people size 28 and above, one fabulous pose at a time.

Frustrated by lack of choices and representation, Bruce Sturgell created Chubstr to chronicle his awesome mens’ plus-size looks and where to find them. In doing so, he became a voice for others who were struggling to see men with bodies reflective of their own, creating a map of accessible fashion for all. Today, Chubstr highlights other stylish plus-size men and continues to shine a light on brands creating stylish, accessible clothing for bigger bodies with masculine tastes.

Real Talk: my confidence as a person and a blogger has taken a serious tumble since getting injured in Feb. There is so much self doubt that has crept in. I question my writing skills, my fashion posts, my advocacy. Because all my time seems to be solely dedicated to the knee's recovery. Not like that's a bad thing, the improvements give me so much hope. But there have been days, hours of sitting alone with my thoughts where I just don't find it in me to post anything because I feel as if I have nothing valuable to say. The strange thing is, my personal fat acceptance, body positive journey is better than it ever has because I have worked endlessly at that. But I still struggle at self care on some days, preferring to disappear from social media because social media feels like a Monster of judgment and passive aggression. Which I know it isn't, if you wield it the right way but my being just feels so strongly about it, you know? I don't know how ppl cAn devote so many hours to so many different social media platforms; it tires me. But on the other hand, my heart lifts when I read your messages and comments. I Guess I feel conflicted about people in general since 2016 and it's still very much a work in progress. I Am terrified of being run over heartlessly by people I adore and respect and love. Spending a lot of time pushing myself with my willpower to get through the physically painful process of the initial aftermath of surgery depleted my joie de vivre. So know that the person you see in these photographs is doing her darnedest to heal, to survive and live again..even though she feels depleted. Because there is no other way than holding on to hope in my eyes. There is always, always hope. #selfesteem #selfconfidence #bodypositive #advocacy #psblogger #plussize #effyourbeautystandards #healing #growth #recovery #holdonpainends #justkeepswimming

Aarti’s blog and Instagram have chronicled many gorgeous outfits, but they have also addressed serious topics like chronic pain and its serious psychological impact. She discusses body-positivity with a tender fierceness so impactful that you know she’s in your corner no matter what you might be thinking about yourself that day.

Hey everyone! Head over to www.chubstr.com to read the profile they did on all of my work. Super dope interview and most, I’m happy represent all of the fat, Black queer boys who don’t feel like they belong. Thanks @chubstr for the love and support. #instalove #profile #instaqueer #instagay #fatblackqueer #loveyourself #blackboyjoy #yas

Writer and influencer Jon posts photos of himself thriving, frequently wearing political messages sprinkled amongst other great looks. With bylines published in Blavity, The Root, and other deeply important Afrocentric political websites, he talks about tough issues that are otherwise seldom brought to light.

Australia, while beautiful and diverse, is known for its xenophobic attitudes toward immigrants and even its own dark-skinned indigenous peoples. Sudanese-Australian activist Abbey Mag is helping to carve a safe space for Black people in Melbourne and beyond with a cohort of other like-minded folks within The Blvck Muse.

My full look from last night's @torridfashion #nyfw #afterparty -- Ladies, it's okay to shop your closet for an event. I've had this #WuTang tee from Torrid for a while. My leather jacket from @catherinesplus is 2 years old and such a staple. I've worn this @melissamasse skirt a few times in different looks. And I pulled it all together with a custom chain belt from @readytostare and my leopard print @puma kicks. I always buy separates that I can wear more than once, creating fresh looks. #torridinsider #torrid #plussizefashion #streetwear #fashionweek #fashionevent #blogger #celebratemysize #40plusstyle #tcfstyle #goldenconfidence #andigetdressed #daretowear #fabuplus #skorchmagazine #styleinfluencer #stylewatch #fatshion #wearwhatyouwant #fearlesslyjustme #loveyourself #latina #nyc

Style may know no age, but ageism is rampant in the plus-size fashion community and most fashion-related communities in general. Despite this, Marcy Cruz is the fearless age 40+ blogger behind Fearlessly Just Me. She defies all ageist expectations and simply rocks her looks, showing women everywhere that you can wear what you want at whatever size or age.

Rachel Otis combines a love of stylish clothing (especially swimwear!) with her profession as a somatic therapist. Otis talks about issues regarding body positivity, queer identity, chronic illness, and mental health — and she created the popular hashtag, #FuckFatphobia! Check it out for great body positive images and videos.