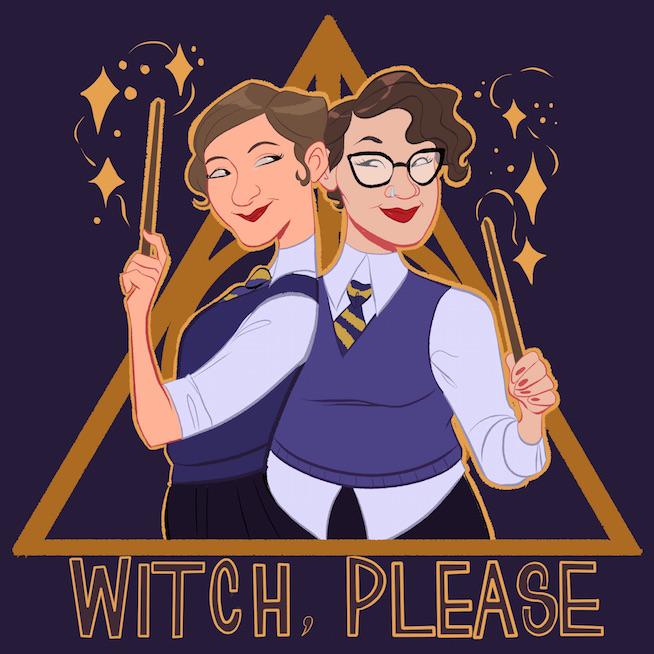 I've been lovingly dubbed the "resident bibliophile" by my coworkers here at Ravishly, and it's true. My love for books and reading has its origin in an experience all too common amongst my fellow millennials: the first time I cracked the spine of Harry Potter and the Sorcerer's Stone.

Ever since that fateful day in 1999 (I think? Something like that. #NinetiesKidProblems — you know, where you can barely remember the nineties at all because you were literally three so for the love of God stop sharing jelly sandal memes on Facebook), I've read anything and everything the world has to offer me. But I always come back to my roots; I'm never too far from a battered copy of Harry Potter and the Something Or Other, and I'll take any opportunity to return to Hogwarts that I can (other than the Actual Mess that is Pottermore, but that is a conversation for another time). Which is how I found Witch, Please, "a fortnightly podcast about the Harry Potter world by two lady scholars." It's exactly as awesome as it sounds.

Hannah McGregor and Marcelle Kosman, the two proud lady scholars in question, have blessed us with a feminist analysis of the Harry Potter world, complete with an abundance of owl hoots. As literature professors, their academic twist focuses on Harry Potter's usefulness as a vehicle for social commentary and its fascinating adaptive journey into film. The podcast is nothing short of delightful, and I was lucky enough to have a Skype call with the two of them just before Christmas of 2015, AKA: optimal Harry Potter time. They were the coolest, and I've collected bits of what we talked about below. Sadly, the discussion on kitty collector fan culture did not quite make the cut, but I'm always happy to post a follow-up should the demand call for it.

Hannah: So, one of the things that I think is a misconception that a lot of people who aren't trained as literary critics — so 99.9% of the population — and a lot of people who are shitty literary critics, is that being a literary critic, or being a cultural critic, is about tearing things down. It's really, really hard to do good cultural criticism of something that you hate, or something that you think you're better than, or something you think you're smarter than. You're going to produce really shitty criticism. I think one of the really exciting things that you learn when you're studying this field... It's just, I was thinking of this ... I was at a talk the day before yesterday where the guy talking is doing a study of malls. He said he's from Calgary, which is a mall city. He said the reason he's writing this book about malls is that he hates malls, and he's always hated malls, and he wants to use the book to work through that dislike of it because when you study something seriously and rigorously, even if you hated it to start, you kind of develop some attachment to it. Here's what I think the great literary criticism is — I think it's always fandom a little bit.

You're trying to pretend that there's this distance between what we do and what people on Tumblr are doing, but there's really not that much of a distance.

I mean, now that I think of it, fandom has its own kind of dialect, and so does academia in a lot of ways. You're not walking around saying "headcanon," but you are pulling out adaptation theory and things like that, things other people might be unfamiliar with.

Marcelle: I was just listening to the episode that Hannah just did with Neil, Gadding With Guys With Film Degrees, and I remember thinking, "Gosh, for a whimsical podcast about Harry Potter, they are using the word dialectical an awful lot." I just don't think that we know how to separate those things. When your fandom and your academia collide, what else can you do except for talk about the dialectics of something that you're a really big nerd about?

Has doing the podcast, has it influenced the stuff you do professionally? Has it changed that at all?

Hannah: It's had a big impact on my teaching. It has reminded me of how easy it is to find examples of the big ideas that we talk about in every day context that students are going to be a lot more familiar with, so it's made me sort of more readily go to like, "Here's this big idea and it's really intimidating to wrap your head around it, and so I'm going to unpack it for you via this thing I think you might have heard of, this thing I think you might already care about."

I think the really nice thing about this project that we're doing... it lets us talk about things that we actually care about more deeply than Harry Potter, which is like feminism and race and sexuality and the politics of representation, and Harry Potter is just the really fun, engaging way to get at those things that I think matter to us a little more urgently. That process of working through how exactly it is that unpacking one text can let you get at these much bigger ideas, has been something I can bring into the classroom more regularly.

Marcelle: This is a tricky question for me because I've been on maternity leave since the end of August, but have kind of in some ways been on mental maternity leave since April. I did some work over the summer, but a lot of what I did with Witch, Please was as important to me as wrapping up the kind of "for real" academic stuff that I was doing, the stuff that I'm actually supposed to be doing versus the stuff that I do for fun.

What I would say is that it has made me think differently about the ways that I am engaging my objects of study. I work on pop culture-y kind of stuff, but like really old pop culture stuff and I'm sort of trying to figure out what was the culture when it was produced. Doing Witch, Please and engaging with Harry Potter in this way, I feel like it's given me a lot of fodder for how I want to interact with these other things, the things that I have to engage with seriously.

Did you ever expect Witch, Please to develop such a cult following?

Hannah: Somebody posted a Witch, Please cross-stitch that they did on Twitter. I shared it because I was like, "This is amazing. This is super beautiful. People are making cross-stitches." And the person responded and said, "Give me a mailing address and I'll send it to you." I was like, "But you're a stranger. Why do you want to give me presents? I don't understand."

We really did something for somebody. I do think it's a particular conjunction of a lot of moments and cultural forces. I think one of it is that, with podcasting really sort of taking over as a major cultural form, there was this huge vacuum of podcasts where you get to listen to women's voices. I think for young women, we want to listen to other women talk. I think we're tired of just listening to men all the time. If you like podcasts, you are listening to men almost all the time. I like them. I love the men I listen to on my podcasts, but I want to hear more women. I think that's a big part of it.

Marcelle: One of the things that happened pretty early on was other people with podcasts got in touch with us and were like, "Your podcast is super cool. We also do a podcast." There were a handful of them, but the one that I remember was Khaleesis and Amazons. They're super cool. They continue to mention us in their tweets and stuff and to mention us on their podcast, which we super appreciate.

One of the things I think is different about the one that we do versus a lot of other podcasts, particularly podcasts about books, is that ours has a lot of structure to it. It's got a lot of things to break it up, so it's not just two or more people talking for an hour and a half. When we first started recording, I would try really, really hard to break the podcast down into an hour because in my head, nobody wanted to listen to something that was longer than an hour.

I still stand by that. I don't think that most people want to listen to two people talking for more than an hour, but when you break something up with like musical interludes or having different segments, all of a sudden, people have more patience for it because it's like, "Oh, now it's this segment and now it's this segment," as opposed to just two extremely exquisitely charming and brilliant women having lots of things to say for a very long span of time. I think that that just makes it more digestible.

Who are your favorite characters in the series?

Hannah: My favorite character is Neville because I love an underdog and because I think, in a lot of ways, I identified with Neville early on. I love Hermione. Obviously, she's a very powerful role model for me, but I also started reading Harry Potter right around the time that my mother was diagnosed with cancer. This idea of having something really dark happening in your family [like with Neville's family], the shame affiliated with a really long term illness, that was really hard to deal with when I was young because little kids aren't as good at dealing with those things.

The way that he starts off as this underdog character and ends up sort of redeemed. I love a lot of things about Neville as a character and there's a reason why I feel so many tender feelings towards him. As a child, I was basically a cross between Hermione and Neville. Like a Hermione with the social standing of a Neville.

Marcelle: I think that my favorite character is actually the Weasley twins as a unit. They are the characters who bring me the most delight every single time because I was thinking ...

Yeah, the Weasley twins bring me the most delight. They're my favorite characters. I think I would say that Neville is probably the most interesting character because he's constructed as the kind of foil to Harry until the very end, when he stops being Harry's foil so much as another really kickass young man who has come into his own. I really like that, but sometimes I wonder how much I'm influenced by the movies because Matthew Lewis as Neville  just does such an incredible job of going from nerdy, uncool underdog to surprising babe.

Hannah: Yeah, he does a great job of that. He really pulled that off.

If you like this article, please share it! Your clicks keep us alive!
Tags
Harry Potter
Witch Please
Books
feminism