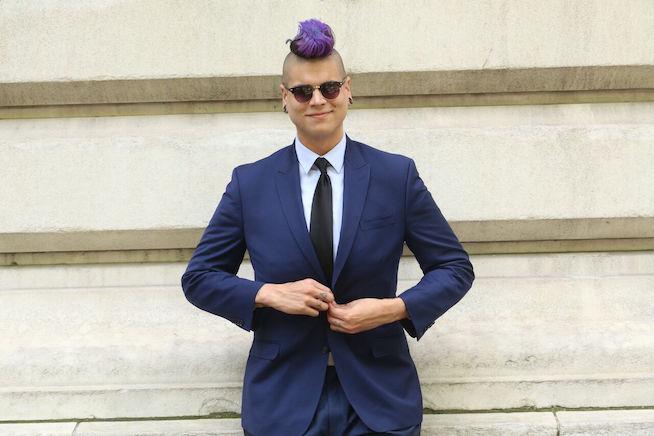 Matt doesn't need much of an introduction around these parts, but we'll indulge you. Matt Joseph Diaz, bona-fide member of the Rav Fam, is a body positive blogger best known for his viral video sharing the excess skin left from losing over 200 pounds. Matt recently posted a follow-up to that video on this here website! We got to seem him get naked again. It was a good time. You should take a look:

It's about time we sat and had an official People We Love chat with Matt. He's a very important member of our little corner of the web, which comes as no surprise, since he seems to be right on course to take over the whole damn world. Crop-tops and good hair for all!

Could you tell our readers about what made you decide to share that video? What went through your mind when it went viral?

Well, in reality, it was all kind of an accident. I'd written about my weight loss journey and my changing body on Tumblr for ages, and one day someone just sent me an anonymous question asking if I dealt with excess skin from the weight loss, because they'd lost a lot of weight and felt uncomfortable with their skin.

Somehow, in years of talking and writing about my experiences, nobody had ever asked that question. My body was a secret, and here I saw someone trying to reach out and ask if someone else had gone through something they were struggling with.

I wanted that person — and anybody else following me — to not have to worry that they were alone anymore. So, I decided to share my body with them. I only had 800 followers on Tumblr at the time, and as it blew up and I saw the numbers climb, I received thousands of messages and talked to people all over the world. I realized that there were so many people who felt isolated by their body image issues, and all they needed was to see a hand extended out to them — someone to tell them that it was OK and that they weren't on their own.

You talk a lot about the way you’ve cultivated your appearance — what advice do you have for people who want to engage in how they look but often get wrapped up in negative feelings about their appearance?

Positive body image is a battle that is fought every day. You don't hit a point where you say, "Ah yes, I'm confident now," and just stop feeling insecure. Your insecurities, they're like scars from war. They can fade and they can be hidden, but they stay with you forever.

If you're someone who wants to take a lot of pride and put a lot of effort into how you look, it's a cyclical process. The more you stylize yourself, the more care you put into crafting your own unique look, the more it begins to feel like decorating a house. When you first move in, it can seem daunting and empty, and it can feel impossible to grasp that you'll be living there. But as you paint the walls, really make it your own, you turn this foreign and strange place into a home.

How does masculinity fit into body image/self-esteem? Why don’t we talk about it?

I've actually written an article called "Where Are All The Body Positive Men?" but the answer is simple: toxic masculinity. Our patriarchal society tries to raise men to be unfeeling— that the definition of being "a man" is being tough, silent and pushing through any sort of negative feelings you might be dealing with. It glorifies aggression and shames femininity, which is ridiculous and dangerous because it equates being feminine with being weak.

Self esteem and masculinity are very closely tied together for men. The reason I love bright colors and floral print is because I was steered away from those as a child — I was told it was "girl stuff."

I was never a "traditionally" masculine dude growing up. I was a crier and I didn't play sports and I wasn't "tough," even though I was large. It made me hate myself, and I suppressed most of the things that I thought made me feminine.

Ever since I decided to refuse to follow those traditional gender roles, floral print has been my favorite thing. It feels like taking back a part of me that I always had to keep hidden away. My self esteem has never been higher, and it came with an understanding that not fitting within the lines of what people consider "masculine" doesn't mean I'm not strong.

You recently had surgery to remove some of the excess skin. That had to be an incredibly emotional experience, and you’ve shared some of that with your followers. Body positive activists often feel a lot of pressure to be “positive” — have you felt that? How do you give yourself the room to feel how you need to feel?

The way I look at it, people come to me because of my transparency. The video that went viral was one of the most sensitive, personal, vulnerable moments of my life — and the entire world saw it. People trust me because I'm real. I'm three dimensional to them. I'm not an organization — I'm just a guy.

So much of that relationship and that trust lies in sincerity, and if we're being sincere: I have a lot of bad days. I deal with mental illness problems, I'm still recovering from two major procedures, there's a lot of shit going on, and I'm not going to try and hide the fact that I struggle with it.

The reason for this is that people need to see that you still have as much value in the bad moments as you do in the good ones. It's great to shine a light on happy experiences you have, but the difficult times are what show the strength and resilience that lies inside of each and every person.

If you can take those difficult moments, get through them, thrive in the face of them, and use them as a learning experience to try and help others? Then maybe those bad moments aren't so bad after all.

What advice would you have for someone looking to exercise or change their eating habits but scared to engage in “diet industry” attitudes toward weight, health, and appearance? Did you struggle with that during your weight loss?

I've been through hell and back with the diet industry. I've done Atkins, any number of crash diets, Weight Watchers, I even went to a goddamned hypnotist at one point. The diet industry will try its best to shame any body types that lie outside what they put forth as "the ideal," and glorify the few who dedicate themselves full time to being that ideal.

There's nothing wrong with wanting to be fit and healthy, it's a wonderful thing, but it also isn't for everybody. I've lost 270 pounds and I don't want to be super ripped because I have literally no interest in spending that much time at the gym. I don't see it as necessary for my lifestyle, and having a little bit of pudge left over makes me super cozy to cuddle up to.

The ladies love me because I'm built for comfort, not for speed.

What you have to understand is that whether it's the diet industry, the tabloids, people on the Internet, or even people in your life, nobody has the right or the ability to define you or what you're worth, especially not by your size. You and you alone have the ability to define your worth and you do it with your actions, your relationships, and the mark you leave on this world.

There will be people who try and judge you — call you gross or wrong or ugly just because of your body. These people are always wrong, and you'll never be good enough for them. If it isn't your size, it's your style, your hair — there will always be something they want you to change because it isn't about "making you better," it's about "keeping you down."

Who are some body posi peeps we should be looking at? Anyone you want to give a shoutout in particular?

Meghan Tonjes is a musician and a body positivity advocate who started the #BootyRevolution on Instagram. I met her seven years ago, before any of the activism stuff and before either of us really "blew up." Knowing her for such a long time, it's incredible to see how far we've both come. She's someone I admire greatly (aside from just being a wonderful person) and I'm so glad to be her colleague and friend.

John Glaude is someone in a similar situation to me, he lost a bunch of weight and has become R I P P E D. Dude is sculpted, it's insane. He's been on Ellen, you might know him as Obese To Beast on social media, and not only is he an inspiration to weight loss stories everywhere, but he's just generally a great guy.

And of course, I don't think I can talk here without speaking about Loey Lane. She's a video blogger, she talks about fashion, and she also happens to be like one of my biggest crushes in the body positive community. Not only is she stunning, but she's also really intelligent on topics on body positivity, after being a follower of hers for over a year we finally began talking (still freaking out about that) and I'm so honored to have an opportunity to watch her work and get to know her better.

If you like this article, please share it! Your clicks keep us alive!
Tags
matt joseph diaz
#ditchthediet2016
body acceptance
body positivity