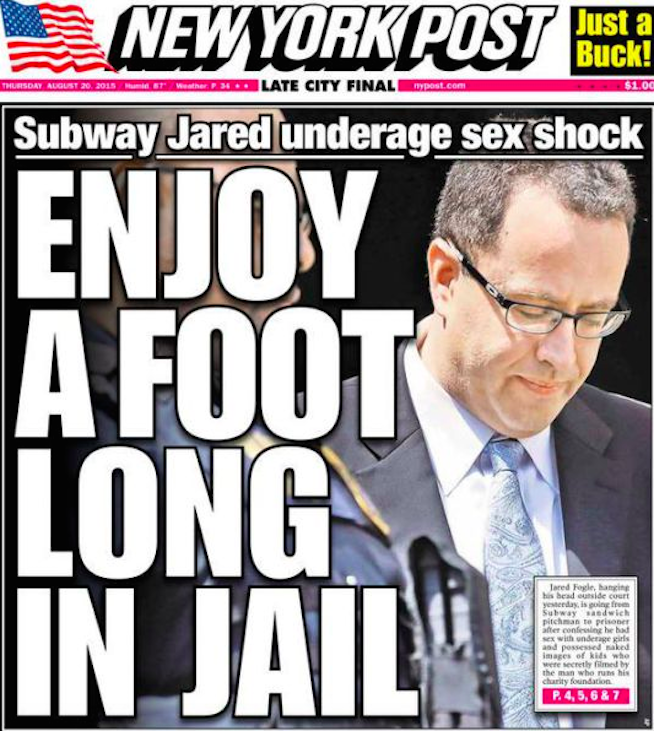 OK, so Jared Fogle is admittedly a pretty gross person. And so is the NY Post's cover about his recent underage sex scandal.

The cover reads, "ENJOY A FOOT LONG IN JAIL" (the caps are theirs, not mine). As the Observer so eloquently asked, has this gone "sub-way too far?" Sex scandals and puns apparently go really well together.

But yeah, the NY Post has definitely gone "sub-way too far." As in pushing us yet another foot deeper into the depths of rape culture with this absolutely tasteless-prison-rape joke.

I think it has been well established that jokes about rape victims are awful, and really not funny at all, regardless of gender. Rape in prison is a huge problem, and is often not included in sexual assault statistics 1. because people don't care about the incarcerated, and 2. because masculinity leaves no room for that kind of vulnerability. It's not funny — at all.

Also, nobody has a foot-long penis, especially if they work for the NY Post, even if we're going by Subway's falsely advertised 11-inch standard.

If you like this article, please share it! Your clicks keep us alive!
Tags
jared fogle
NY Post
subway
enjoy a foot long in jail
Rape
rape culture