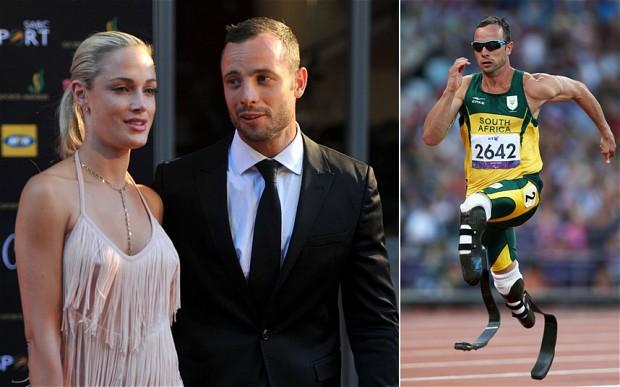 Hearts collectively broke all across the globe last year on Valentine’s Day, but not for the usual love-lorn reasons. Oscar Pistorius—the inspirational Paralympic champion who graced the gold medal podium twice at the London 2012 games—was arrested in connection with the death of his girlfriend, Reeva Steenkamp. According to Oscar, he mistook Reeva for an intruder and shot her through his bathroom’s door. Prosecutors, on the other hand are sticking with the ol' lover's quarrel gone array theory.

Oscar will be tried for premeditated murder starting March 3 of this year. On the anniversary of Reeva’s death yesterday, Oscar released a cache of intimate pictures along with a statement:

No words can adequately capture my feelings about the devastating accident that has caused such heartache for everyone who truly loved —and continues to love Reeva...The pain and sadness—especially for Reeva’s parents, family and friends consumes me with sorrow. The loss of Reeva and the complete trauma of that day, I will carry with me for the rest of my life.

The pictures themselves said little—but the stats say quite a bit:

On average, approximately 31,000 Americans die from gun use every year. Homicides (in general) take the lives of about 16,000. Theoretically speaking, there's plenty of room for all kinds of macabre accidents. On the flip side, about 1.3 million women suffer physical abuse from an intimate partner every year. Though it's hardly representative of the entire country, (although the Big Apple sometimes feels that way) New York City reported that 68% of their female murder victims met their fate at the hands of domestic violence.

Pending outcome aside, the world lost an epic-ly awesome woman that day. This Cape Town native began rocking the world as a model in her late teens—but don’t even try to say she was just a pretty face! Ever-fierce, Reeva also worked her toned butt off earning her law degree at Nelson Mandela Metropolitan University; she was a vocal advocate for women’s rights. In fact, she was supposed to give a speech about domestic violence the very same day she was killed. The palpable irony is kind of chilling.

We’ll all be tuning in March 3 to see where this trial goes. It can’t bring her back, but perhaps it will strengthen her legacy.