The Saga of Justin Bieber and Selena Gomez: Cut Those Crazy Kids a Break! 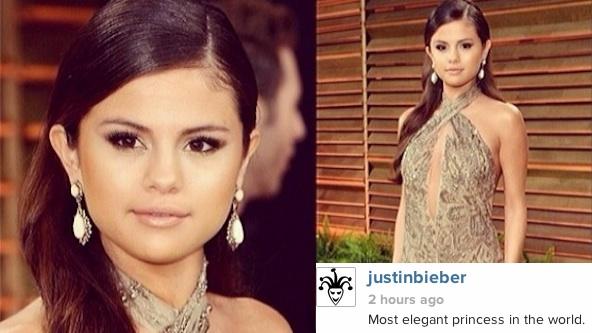 Stop the presses! Breaking news! Justin Bieber has publicly displayed that he wants ex Selena Gomez back in the form of — what else?! — a repurposed Vanity Fair Instagram photo of Gomez, captioned with: "Most elegant princess in the world." (Awww.)

Could our on-again-off-again young lovers be headed for another reunion?

Yes, we get it. This dramatic gesture does induce some eye-rolling and seems erratic, if not a little crazy. But, to defend Justin yet again (what is happening?!), it's worth pointing out that he is 20 and she is 21, and he started dating Selena when they both were very impressionable teens. And young love, as you may or not recall, is pretty much guaranteed to be completely bonkers.

In fact, like a modern-day Romeo and Juliet (yup, I said it), Justin and Selena perfectly encapsulate the phenom of crazed, irrational adolescent love in the age of social media. And science is totally backing me up on this.

Young Love is Dramatic and Depressing

A joint American-Australian study affirmed scientifically what anecdotal evidence has long revealed to be true: ending a relationship before adulthood feels like the end of the world forever and OMG I want to die!! The reasons? Turns out a rapidly-changing brain, raging hormones and a sheer lack of an individual identity...are not exactly a healthy recipe for handling the difficult emotions of a break-up. Such dramatic responses can easily spur gestures like Justin's public "I want you back" plea that, to more rational adults, seem unhinged.

No big shock here: young love is self-focused. Teens are often in love with being in love, and not particularly grounded in emotional intimacy. Is there any better way to display ego-driven love than through social media? Exactly.

Young Love is Driven by Jealousy

Ramped-up feelings of jealousy are also common among adolescents. Further, one study found that more than 25% of youth think it's A-OK for a significant other to be "really jealous" at times. (Message to kids: No, it's not!)

Here, too, our young Selena and Justin fit the bill. While Justin's Instagram post isn't necessarily rooted in jealousy, other social media "incidents" involving the pair have been. Soon after breaking up with Selena a couple years ago, a photo of Justin with a hot model was posted to Twitter, which Selena promptly reposted with a mysterious ellipses (so cryptic!) At another point, after seeing a different pic of Justin with a sexy blonde, Selena posted a close-up photo of herself with the caption, "I thought he only liked the Latina category." Again, while these gestures seem nuts, they are totally normal for young people who accept jealousy as a regular part of a relationship.

In other words: cut these kids a break. Don't you remember your first young love? Chances are, you acted kind of insane too. Plus, given their celeb status, we're willing to say they're managing the whole public-eye thing fairly well. I mean, at least they're not full-fledged adults who are using social media to post about wanting to tweet at someone's funeral, rip into an ex's new partner, or...well, you get the idea.