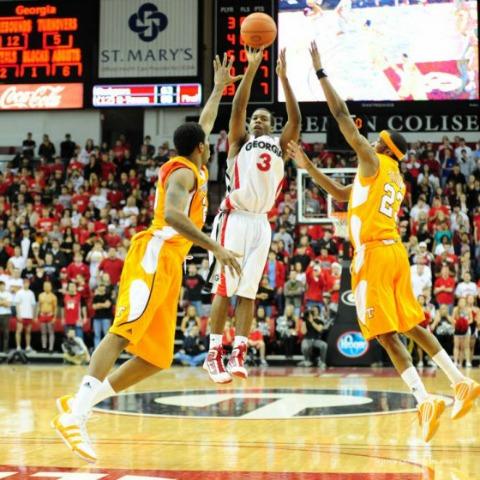 Everything forbidden is infinitely more desirable. Roommate's birthday cake waiting on the counter; professors; your bestie's gorgeous new party dress. Given that natural psychosis, we're very curious about the sex lives of the University of Georgia's men's basketball team. Why? The team's rule-book prohibits the guys from engaging in orgies—which tells us that that there must be some serious secret orgy-ing going on in Athens.

There are a few more, uh, limiting rules about sex as well:
- Don't spend all your energy in the bed all night.
- Hickeys/passion marks should not ever be noticed by coaches
- One. Not two or three girlfriends . . .

It's actually really cool that they include this in their policy. It's well known that colleges have had difficulties properly addressing cases of sexual assault; rape is a shockingly common occurrence on college campuses: it's estimated that a student body of 10,000 will experience 350 occurrences of rape per year. We say "estimated" because most rapes go unreported. Research suggests that 60% of sexual assaults are never reported to the police.

Then again, is limiting the sexual exploration/quirks of college men a small sacrifice to pay for increased awareness of sexual assault as a whole?