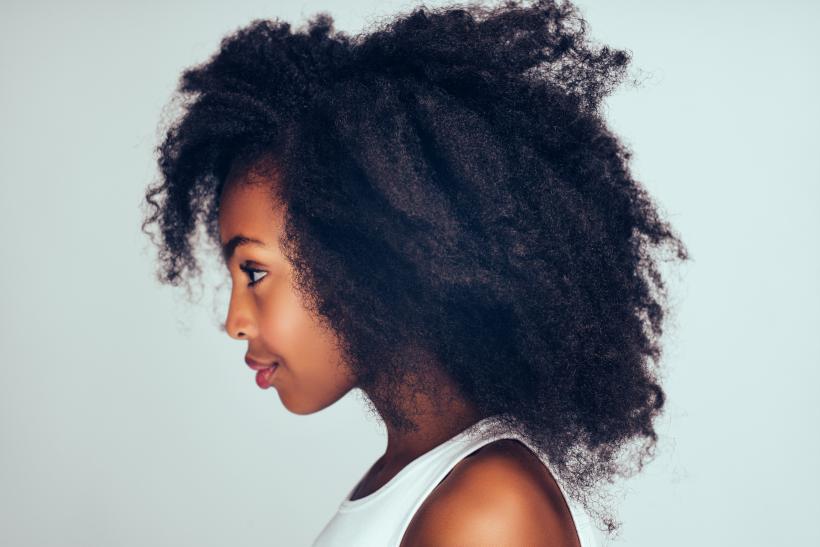 Letting my hair go natural lifted a huge burden off my shoulders. I don’t feel like a slave to it anymore.

I have always been pretty ‘meh’ about my hair. My hair was just a thing on my head; I never really had much of a say on what was done to it.

My mom decided to chemically relax my hair when I was five.

She never really explained why, but my hair was thick and fairly coarse. I always just assumed it was too difficult to manage, so chemicals were the only way to tame it into submission. Going to the salon to get my hair relaxed as a kid was an all-day event. I hated it, but that was just what it was. When she realized that my hair wasn’t growing, she decided that I would get braids. I found myself getting several packs of synthetic hair braided around my actual hair in large box braids. They were tight, and my scalp would be sore for several days afterward. My head felt heavy, and I’d give myself whiplash nearly every time I turned my head. But again, I didn’t argue.

When I went away to college, I was on my own when it came to the daily maintenance of my hair for the first time. Most days I didn’t have the energy to do much more than comb it, especially as my roots began to grow out. The maintenance required was a lot for my tiny dorm room, not to mention my arms. I was too lazy to find a hair stylist close to me in Boston, so I would take the five-hour bus ride back home to New York to get it done.

My hair apathy really kicked into high gear as an adult.

Here’s the thing about getting your hair chemically relaxed; it’s freaking expensive.

It cost about a hundred dollars every six to eight weeks. I began letting a longer amount of time go by before getting it done because I just couldn’t be bothered. My mother shamed into caring for my hair, which in turn made me more resentful. My parents offered to pay for me to get my hair done so I would go on a more regular basis.

But then my parents were no longer able to pay for me to get my hair done, so I needed to find a cheaper stylist. I was able to find a salon in my area where my hair looked just as good as the salons I’d gone to previously, but for a fraction of the price. That was important for me, especially because I had just gotten a job as a receptionist at one of those blow-dry bars.

I know, the irony of a woman who doesn’t like doing her hair working in a place where hair is of the utmost importance isn’t lost on me. But I thought that I would be inspired by being around a bunch of hairstylists. And since washing and blow drying my hair was my least favorite thing to do, working with a bunch of people who could do it for me was even better. Except most of the stylists, while they were willing to do each other’s hair all the time, never wanted to blow dry mine.

My hair, even when it was relaxed, took too much time. My desperation to look cute and fit in led me to let one of my fellow receptionists, who was a licensed cosmetologist, give me a haircut. I was left with something resembling an asymmetrical bowl cut that was damaged because they bleached my freshly relaxed hair (a big no no.) It wasn’t what I asked for, and I was devastated and seriously considering shaving my head. I wore headbands for months.

After I moved to Los Angeles and began working in the ever trendy West Hollywood, I let my new coworkers shame and bully me into getting extensions.

After my adolescent braids, I had sworn off wearing hair on my head that didn’t grow out of my scalp, but since I was already upset and pretty much over my hair, I forked over 200 dollars and seven hours of my life to get extensions. I hated every minute of it, because not only did I have all this extra hair (I had never had such long hair in my life) that made my head heavy and uncomfortable, I had to style it every day. It took at least an hour and half a can of hairspray to get the big waves that my job was known for.

I’ll never forget sitting in my bathroom with my boyfriend cutting the extensions out of my hair. I was free, and it was a freaking relief.

I vowed that would be the last time I’d ever wear hair.

For the next year, I still relaxed my hair, but I did it myself at home with the kits they sell at drugstores. I was able to get my hair just as straight as a professional (at this point I had been getting it done for over 20 years, I knew what it was supposed to look like) and only spent ten dollars. Plus, I could do it on my schedule.

Everything changed when I had my son. The hormonal changes in my body definitely affected my hair. My son was a high needs baby; I couldn’t leave him for hours to go to the salon, and frankly, I didn’t care, so most of my hair broke off and fell out. I would find clumps of it on the floor, and it clogged up the vacuum. My parents offered to help when they could, and I’d get it relaxed and cut, but I was exhausted and kind of miserable, so I didn’t have enough energy to care.

As a working single mom, my hair is on the very bottom of my list of priorities.

Once he was capable of being without me, I didn’t want to spend that precious alone time sitting in a busy salon. So, I made the decision that enough was enough. I was finally breaking up with the chemicals that had effectively ruined my hair anyway. Once enough of it grew out, I let my friend cut off the dead ends. Letting my hair go natural lifted a huge burden off my shoulders. I don’t feel like a slave to it anymore, which has made me feel less annoyed by it. Yes, the maintenance is still a pain in the butt, but washing and conditioning it is more aligned with what I have time for. I am now scouring the Internet looking for products that will help my hair grow, even though I know that trying to undo twenty something years’ worth of chemical damage isn’t going to be an easy road.

While my hair isn’t 100% where I want it to be, for the first time ever, I am taking more than a passing interest in caring for it. So even though it may not yet look the way I want it to, for me, the battle was getting to a point where that bothered me. Yes, sometimes I simply rake my fingers through it and call it combed, and that’s okay too. Rome wasn’t built in a day either.

If you like this article, please share it! Your clicks keep us alive!
Tags
black hair
hair
Black bodies
ownership
race
women
people of color
women of color
black women