England's St. George’s Day: Brits Duke It Out Over an Exalted Dragon Slayer 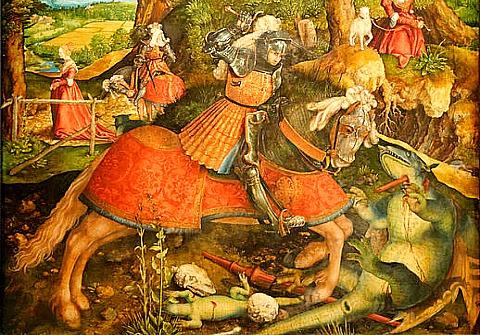 Last week was St. George's Day, the feast day of England’s patron saint and dragon-slaying martyred knight. The quintessentially English homage has been long celebrated in the UK as an unofficial holiday, and festivities include feasts, church bell ringing, dancing, parades, flag waving and other such revelry.

So why not make this celebration of all things English an official national holiday? The Irish have St. Patrick’s Day and Canadians have both Canada Day and St. Jean Baptiste Day commemorating their French heritage. And we Americans, of course, celebrate with a whole slew of patriotic holidays.

There’s a movement afoot to give the UK its own day of rah-rah revelry, headed by Prime Minister David Cameron. But it's enveloped in the tricky interplay of thousands of years of national history (that includes England's forceful takeover of its neighbors, whoops!), a political union of discrete nations, the current context of mass immigration, and a touch of political gerrymandering.

On one side, there are political conservatives who have long called for an official bureaucratic christening of St. George. And since their base has started drifting to the right-wing UK Independence Party (that’s independence from the European Union), it’s no surprise that Conservative Party homeboy Cameron is vocalizing his support for the holiday. “St. George has been England's patron saint since 1350. But for too long, his feast day—England’s national day—has been overlooked,” he remarked during his holiday address.

On the other side are those uncomfortable with a notion of “Englishness” they feel is largely grounded in the country’s imperial past and exclusionary current context. Many in Northern Ireland, Wales and Scotland feel decidedly un-English and instead have their own national identities, while immigrants feel left out of the narrow vision of English identity espoused by the far-right (which I imagine looks something like this or this).

Sure enough, the #ProudToBeEnglish Twitter hashtag that trended during St. George’s day demonstrated the divisiveness of the conversation on identity: tweets celebrating English pride were posted alongside those taking jabs at the feast day’s patriotic tone.

No doubt fully aware of these divisions, Cameron went on to reference the upcoming referendum in Scotland to decide whether the country will secede from the United Kingdom. He said that when they vote, Scots will “decide whether they want to remain a part of this global success story. So let’s prove that we can be proud of our individual nations and be committed to our union of nations.” But unless the United Kingdom creates a national holiday for each of its members, I imagine the impetus for rallying only around Merry England’s patron saint may falter.

And then there’s the supreme irony that the historical Saint George was in no way connected to Britain. The 3rd century Roman soldier allegedly from Turkey was sainted after refusing to persecute Christians, resulting in his torture and death. The myth that he slew an evil dragon in the British Isles emerged much later, after combining with a mix of pagan and Christian lore endemic to Britain. But national identity is about creating the myth you want, whether it be Ireland's superhero Celts, Germany’s Roman-ass-kicking tribesmen, America’s need to deify the founding fathers, or England's chivalrous reptile-fighter—no need to let historical realities ruin the patriotic good times!

If you like this article, please share it! Your clicks keep us alive!
Tags
England
United Kingdom
St. George's Day
holiday
controversy