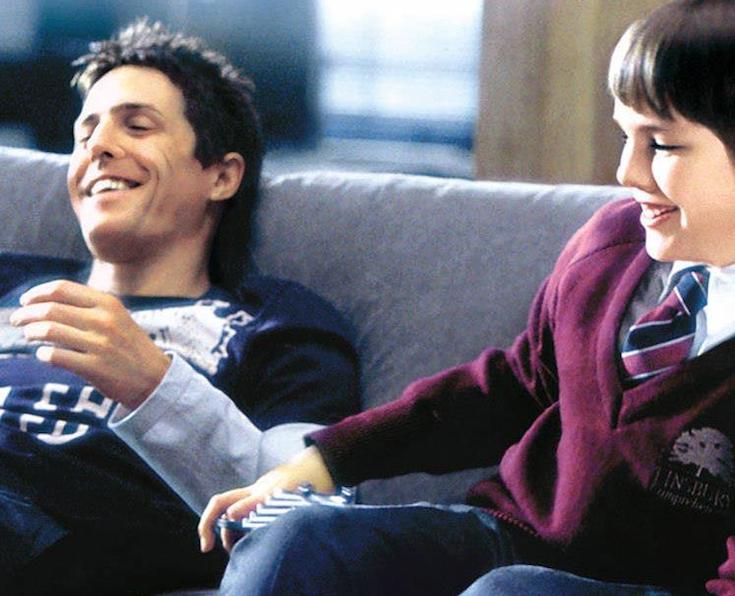 Christmas movies are as much a staple of the holiday season as trees, stockings and spiked eggnog. There's the sentimental (It's a Wonderful Life), the funny (A Christmas Story), the slightly spooky (A Christmas Carol) and the maudlin/beloved (Love Actually). Cherished, though often overlooked, we have unconventional holiday flicks like Die Hard.

And then there's About a Boy.

Don't mistake this film for the formulaic TV show—I'm talking about the 2002 British flick starring Hugh Grant, Toni Collette and Rachel Weisz. Rather than preaching the value of forced holiday cheer, the film uses two sequential Christmases to highlight character development. The movie relies on the significance of the holiday, but doesn't harp on it. It feels, unlike so much other holiday drivel, genuine.

Brief synopsis: Will is an emotionally unattached bachelor who learns to start caring for people other than himself when a 12-year-old boy, Marcus, befriends him. To give you a sense of Will's emotional maturity, he meets Marcus during a quest to romantically pursue single moms.

Here are some of the ways in which the movie feels more honest and real than any other holiday flick out there.

Will, a self-proclaimed "island" of a man, doesn't have a job. Will's father wrote a famous Christmas carol called "Santa's Super Sleigh" when he was a child, and he now lives off the royalties of it. (The song, for the record, is both stupid and catchy, and I'm honestly a little surprised that it's not a real-life Christmas jam by now. Get on it, Mariah Carey.)

Despite the song's cool factor, Will has a complicated relationship with it. The film hints that many of Will's family members were alcoholics, and hearing the song stirs up painful memories. Though Hallmark would have us believe that the holidays are all about joy and merrymaking, many people are more susceptible to depression this time of year. Will's feelings surrounding this song speaks for those who also face painful recollections around the holiday season.

Make no mistake—the movie that is, well, about a boy contains some strong female characters. First we have Fiona (Toni Collette), the single mother of Marcus. Fiona is facing a rough bout of depression when the film begins. As Marcus puts it, "the crying had started again." Early on, Fiona tries to take her own life. Her attempt doesn't work, and she's forced to face her life and those that she's hurt (including, of course, her son). At the end of the film, Fiona looks happy and healthy—Marcus casually mentions that she's no longer "depressed" and "desperate." Plus, she shoots down hunky Will: "You know I'm not attracted to you, right?" We likey.

For such a player, Will chooses some fine ladies to accompany him. Once Will decides to pursue single moms exclusively, he meets Suzie. Though they go on just one date (interrupted by Fiona's suicide attempt), Suzie showcases her boldness. Not only is she a single mom of one, but she looks after Marcus to help out Fiona. Suzie has no problem calling out Will on his lies, but also demonstrates forgiveness.

Rachel, who Will "ends up with," is also a single mom, but Will is transfixed by her intellect. Though the film doesn't tell us what Rachel does, we see sketches around her home. It's understood that Rachel is quite artistic, and her job requires creativity. She, like Suzie, feels comfortable confronting Will about his lies. There's actually an amazing lady-pride speech from Rachel where she smashes the notion that women in relationships are "crazy" and "assuming." For all her strength, Rachel recognizes Will's vulnerability. Ultimately, she forgives him, and at the end of the film, it's hinted that they are in a serious relationship.

It's not just the grown women, either. Marcus' classmate, Ellie, is fierce—even though she's only 15. It's no surprise that Marcus is into her. Ellie first meets Marcus when he's walking around school singing "Shake Ya Ass." Initially, Ellie doesn't realize that Marcus is singing with a Walkman. (Awwww, remember those?) Ellie whips around and starts yelling at Marcus, thinking that he is harassing her. Marcus is terrified. Ellie softens, introduces herself, then tells Marcus that he should be careful where he sings lyrics like that. Oh snap!

Throughout the film, Will entertains the audience with his brutally honest internal quips. I haven't read the book (on which the movie was based), but I can imagine they're even more stellar in prose form.

At a single parent's support group:

"I'll tell you one thing. Men are bastards. After about 10 minutes I wanted to cut my own penis off with a kitchen knife."

When rushing to the hospital after Fiona's suicide attempt:

"It was terrible! Terrible! But driving really fast behind the ambulance was fantastic."

Talking about a brief fling:

"She didn't have a DVD, or satellite, or cable, so we were always stuck watching some crap made-for-TV movie about a kid with leukemia. I had to end it."

While singing "Killing Me Softly" at Marcus' school assembly:

"And there I was killing them softly with my song. Or rather being killed. And not so softly either. Was I scared? I was petrified."

And, the sweet quote to make you smile:

"Once you open your door to one person anyone can come in."

Most Christmas flicks are fun in their own way, but it's the unconventional ones that seem to best understand the season. This story resonates: Man is messed up, man learns lesson. It's akin to Little Cindy Lou Who and the Grinch, only the transformation takes a year.

About A Boy may be less fantastical or overtly emotional than other Christmas flicks, but it's also more relatable. And that makes it a holiday film worth revisiting.