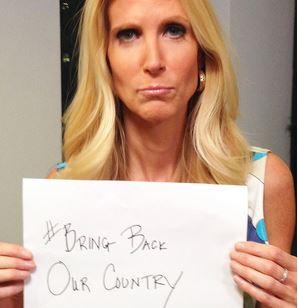 If you ever go on social media ever at all, you've probably been privy to the Ann Coulter meme (momentarily) taking over the intrawebs. Hashtag-phobic? Here's the rundown: in response to the crisis of the missing Nigerian girls, Michelle Obama posted a photo of herself with the sign "#Bring Back Our Girls" as part of a hashtag activism campaign. Conservative lightning rod Coulter then stepped in with her own sign, reading "#Bring Back Our Country."

Cue the Twittersphere, which went crazy coming up with its own riffs on the tone-deaf Coulter photo, including some generally hilarious entries (our faves: "drowning in privilege," "I'm a miserable person who peddles hate to make money off dumb Republicans" and, for sheer randomness, "Comic sans is my favorite font").

This is all well and fine—Coulter certainly deserves mockery, even if she's twisted-ly lapping up the attention. But it doesn't take long to unearth lurking stereotypes that have nothing to do with Coulter's opinions and everything to do with (sigh) her appearance.

Take this photo, which several outlets have presented as an exemplar of the meme: 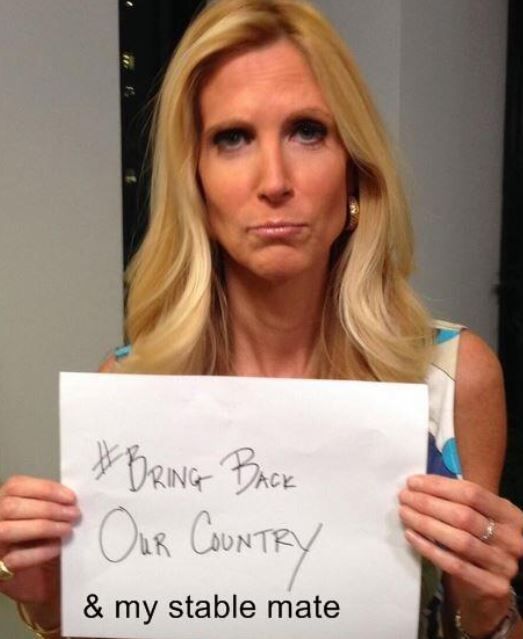 This gem came accompanied with Twitter comments including "Ann Coulter is such a horse face she should race in the Kentucky Derby next year" and "Mr Ed...?" (Get it? Because he's a horse!) 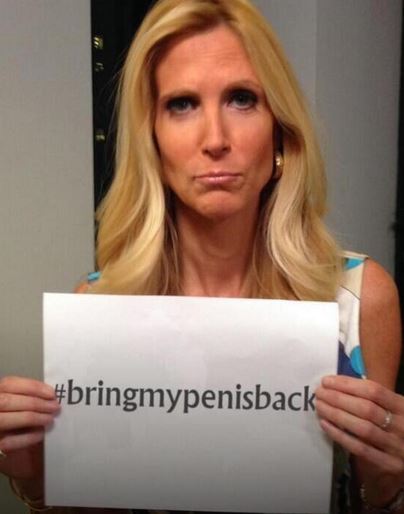 Slamming Ann Coulter for her aggressive insensitivity is A-OK. But what the hell does that have to do with her looking like a horse or a man? Nada. All these attacks serve to do is make her opponents look like narrow-minded A-holes, which hurts more than helps any sort of grander cause to fight against her brand of soulless ignorance.

Let's remember that Coulter's the narrow-minded A-hole here . . . and not become that which we seek to mock.

If you like this article, please share it! Your clicks keep us alive!
Tags
Ann Coulter
Twitter
Michelle Obama
Bring Back Our Country
humor
meme
trending