Home Is Where the Heart Is And Other Lies 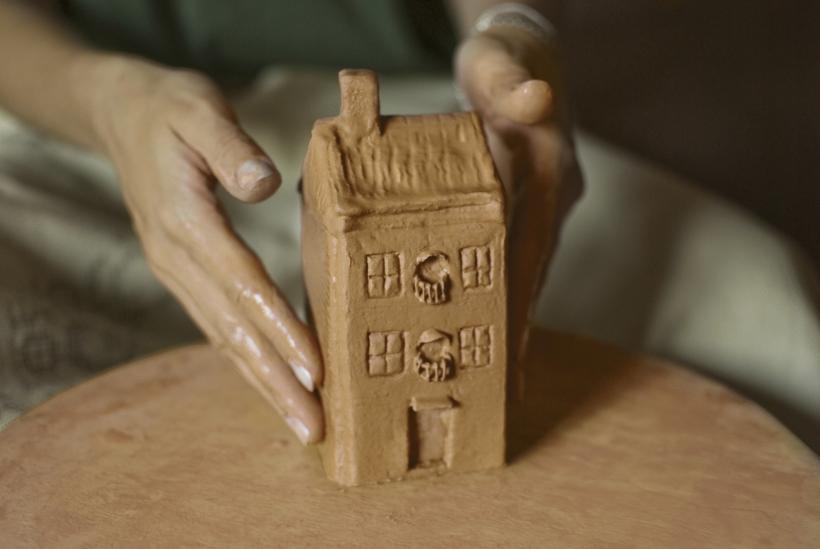 My father, a wonderful wayward writer, has never been what you'd call a provider. (A raconteur, a silver-tongued word smith, a man dedicated to cheating bourgeois tendencies with French cuffs, charm so intense it's actually cunning with British-ly bad teeth? The kindest, most effervescent straight man on earth? Yeah, that's you might you call him.) His uncle, a wealthy, eccentric and rather solitary man who divided his time between the Hamptons and Puerto Rico (you do the math) had bought us this old farmhouse outside of Princeton, New Jersey with the intention of fixing it up for us. He died not long after it was ours.

If you squinted your eyes, you could see what *Uncle Charles might have been envisioning. A pristine, lanky farmhouse resurrected right out of the Civil War, picket fence poking up through tall stalks of grass, the wood burning stove casting long shadows across the polished pine floor. What we got however was a sunken porch and dirt-glutted shingles; blue jays nesting in the roof. They squawked with anger whenever we entered the house; dive bombings were not unusual, especially in the springtime. There were gaping holes everywhere in the plastered walls, a few renegade plants curling around the downstairs toilet and the carpets dank and dark with stains—everything had to be torn up.

In my narrow bedroom on the second floor, there were exposed wooden beams along the walls. These elements weren't so much rustic as raw and I spent years rolling against them in sweet spectral dreaming, only to wake wincing as an angry scratch welled to the surface of my side. Yet somehow they yet never stung enough to move the bed.

The floors were so warped that my beagle's illicit urine would slowly stream from one side of the room to the other. The knots in the wooden floor were raised so high they could send you sprawling. The linoleum tiles in the kitchen made my feet sweat.

I hated that house.

Well, at first. I was so embarrassed I used to have the school bus drop me off down the street at a different stop and then walk 15 minutes back up the road lest anyone see my residence. There were few friends I allowed entry and those that were allowed were warned, buffered with apologies and explanations. I was eleven, in sixth grade. I wanted to disappear.

Strangely enough, this house was a stone's throw from the very boarding school—Lawrenceville—where my parents had met on a blind date at age 16; often there were mixers with the female boarding schools nearby and my mother had been coerced into going by her girlfriend. While she says my father was certainly the most charming and interesting person she had ever met, she'll also tell you the deal was almost off when on the next date, at a football game, she realized how crooked his teeth were, that he was wearing espadrilles and he was chewing aspirin.

Anyway, about four years after we moved in, my mother and father parted fairly amicably with gnashed teeth and swollen eyes. They had a lot of troubled water beneath their bridge and finally, my mother announced she was leaving. I thought, "shit, you two will tear each other limb from limb, go, go!" I know mothers aren't supposed to leave, but she's a person and people are supposed to be happy. Or at least try to be. I knew she wouldn't leave unless she had to and I had seen those mornings when she was so sad she could have stared at the walls all day.

She bought a little red house in Connecticut near her brother Michael. That left me, my father, two cats, two dogs, the bats, the mice, the birds, the spiders and the squirrels. Lord knows I was never lonely.

There were more than 150 bats in the attic, scratching and tumbling their guano in sodden balls overhead. Occasionally, the bats would fly in through other holes in the house, disoriented but eager to rejoin their leathery brethren. As I grew older, I moved to third floor for privacy, across from the attic's door, and once or twice a month I would wake to the fa-fa-fa-fa-fa of frantic wings and I would belly-crawl to the hallway across my carpet. Taking the stairs two by two, I'd run to my father's room and nudge him awake.

"Daddy, bat." He would rouse himself quickly, dropping his long slender feet onto the wooden floor, reaching for his horn-rimmed glasses, and adjust his pale blue Brooks Brothers underwear. (Although I'm an exhibitionist by nature—much to my mother's confusion and chagrin, "Katie, please close your legs"—my parents are rather private about their bodies and seeing him this naked, this raw and sleepy, was always a little embarrassing, and exciting. I both dreaded and savored the intimacy.)

We'd each grab a collapsible laundry basket and head upstairs. I would wear mine over my head, and my father would use his as an enormous net, lunging forward to grab the tiny, shrill-squeaking creature. "Ha, ha!" he would grin closing the laundry bag above the bat's head. We'd march down two flights of stairs and into the front yard in our underpants. "Go, go!" I'd yell as it fluttered from its confines into the woods. "Jesus, it's like the Alamo," my father said.

The mice were were also ubiquitous—gray shivering creatures with noses dabbed with rancid peanut butter from our Have a Heart traps. And the squirrels, though they were a later edition. They seemed to reside solely above our living room ceiling, scampering back and forth across the length of the room, invisible but noisy. "They're just rolling nuts, everybody with an old house has squirrels," said my father, like any other explanation was utterly daft. My mother thought they could just as easily be rats. She would peer at the ceiling and just shudder, nervously puffing cigarette after cigarette, shooting my father sidelong glances.

In the wake of my mother leaving, my father and I lived like renegade bachelors, doing what we liked, when we liked, however we liked it. Which was usually pretty fun. And messy. My father's bedroom was a wonderland of disorder. Shreds of newspaper articles, books, ancient postcards, tote-bags filled with balloons, kazoos, masks, fireworks, (he's a theater man) covered every surface—the floor, the dresser, his closet, his bed. There were times when he slept beside piles of his dog-eared newspapers, lights blazing, his shoes and glasses still on. I would nudge everything into a smaller pile, take off his glasses and turn off the light. He would usually wake up as the lights plunged off, confusedly greeting me hello and then goodnight, rolling over into the rustling pile.

I had my own bad habits. As a typical, red-blooded 15-year-old female I painted my nails in the bathroom oh, about three times a week, and every application was documented in glittered purple, pink and orange, smearing, dripping, and spilling across the toilet.

My father and I weren't big on the broom either—the dust bunnies were carnivorous, huge, snarling and tumbling from every vent and corner—unless my mother was coming to visit in which case we ran around fluffing pillows, vacuuming, and generally trying to cover up the madness with chintz quilts.

Ella Fitzgerald, Duke Ellington, Benny Goodman, the Andrew Sisters, Cole Porter, Edith Piaf—my father played their albums all night, every night. He would shuffle over and take my hand and we'd dance across the living room. He's a beautiful dancer, a good leader. He says I bounce too much; I'm still working on it. We spent a lot of time feeding the ducks and geese, the sheep and goats and drinking apple cider slushies at dusk at Terhune Orchards. We watched bad vampire movies and ate a lot of ice cream from Halo Pub, pint after pint. We took the dogs for long long walks across the fields of Lawrenceville’s campus and went swimming in a man made quarry with huge black inner tubes.

We'd go late in the day, when it was cheaper to get in and the water was always too cold to swim, the shadows falling long and dark across its surface. A section of the quarry was always tied off because the lifeguards couldn't see around the bend. One of us would always manage to shove the other one over the line so the lifeguard would be forced to bellow out, "You're not allowed over there!" or toot on a silver whistle, its shrill call reverberating against the stone walls for what seemed like minutes. It was thrilling, hilarious in its tiny humiliation. We were the best of friends.

My parents spent ten years apart. In that time the house got crazier and crazier—countless wayward treasures found their way onto shelves, onto the walls, into closets, into piles on the floor—my father was an eccentric sand trap where anything interesting was invited to stop by and stay forever. And I was the rapt audience in a complex philosophical treatise expounded upon daily. According to my father very few people, "really understood what was going on," falling prey to pathetic, ignorant pastimes like watching sports on T.V. or matching their rugs to the curtains. I grew proud of my house, its idiosyncrasies, my father's refusal to participate in the mainstays of suburban life. I snickered at my own friend's homes, their beige carpets, their manicured gardens, their Home-is-Where-the-Heart-Is wreaths, their place settings, their gleaming white bathtubs. And their stiff, boring parents, lumpy with age, droning on about work, about the veterinary bills, about nothing, smiles wan. I pitied them.

Now I realize I was more a junkyard dog than a lion, growling out of fear, snarling out of misplaced pride—no one wanted what I had, but I prowled the perimeters of my pile flashing tiny teeth and wretched claws, desperate to protect it.

My parents have since gotten back together (ask me about that sometime) and they've forged yet another home together that's no longer mine. My love-nest is long gone too and so I continue the search, collar high and eyes wide, for another nest, another pile, another home.

If you like this article, please share it! Your clicks keep us alive!
Tags
personal essay
home
childhood
mothers
fathers
growing up