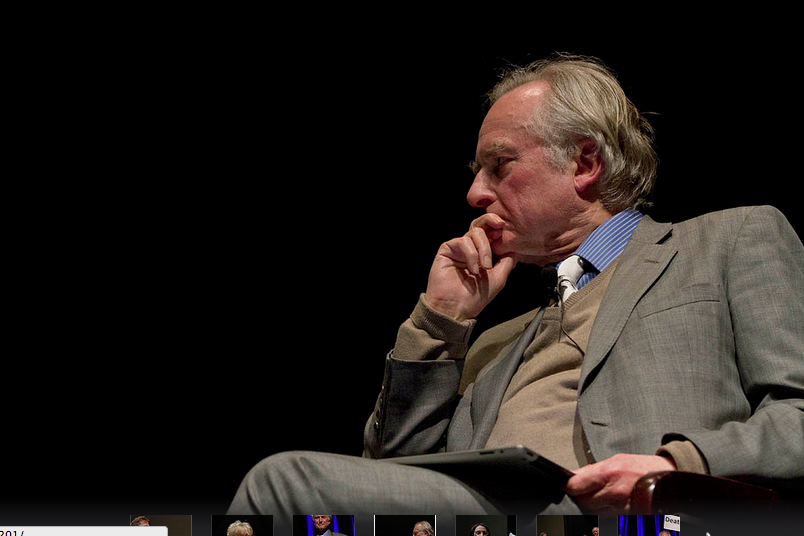 Oh, Richard Dawkins. You world-renown evolutionary biologist you. You really messed up today with your tweets (to your 988,000 followers) about rape and pedophilia. Lemme explain. . .

X is bad. Y is worse. If you think that's an endorsement of X, go away and don't come back until you've learned how to think logically.

Now if you’d just left your computer to go sip on some tea or opted to tweet a few cat GIFs and call it a day, all would have been fine. But no. You were off and running Usain Bolt-style, streaking your brain-spew across the social stratosphere:

And because talking about sexual molestation of children—and referring to some of it as “mild”—wasn’t quite enough, you just had to keep going:

Date rape is bad. Stranger rape at knifepoint is worse. If you think that's an endorsement of date rape, go away and learn how to think.

Then, clearly responding to pushback from some tweets, you did this weird thing where you somehow backpedaled and doubled down on your beliefs, er, logic:

If you prefer to think date rape is worse than knifepoint, simply reverse my syllogism. To say Y is worse than X is not an endorsement of Y.

Yes yes we get it. You rank X and Y differently. Fine. Whichever you rank as worse, it is still illogical to interpret that as approval of the other. Whether X or Y is worse is a matter of opinion. But it is a matter of logic that to express that opinion doesn't mean you approve of either.

But then we got a little passive aggressive, didn’t we professor?

Stealing £1 is bad. Stealing an old lady's life savings is worse. How DARE you rank them? Stealing is stealing. You're vile, appalling.

Why you feel compelled to rank these acts in a public forum on Twitter remains a mystery--acknowledging, of course, that my brain is but a microscopic speck compared with yours. You seem to be offended that no one is getting your logic and that everyone who’s angry is upset because they think you’re implicitly approving of some rapes. Let me reassure you this is not the case.

We’d already gotten the message. You think rape is bad, no matter how you rank it. X and Y and blah blah blah. . . save it. The issue and why you received, as you term it in your follow-up blog post a “bizzare Twitter storm” is that you—a powerful, white, heterosexual, cisgender man—had introduced and perpetuated the notion that rape and sexual abuse can/should be ranked (apparently as a go-to to demonstrate logic?). And while your blog post claims “I wasn’t even saying it is RIGHT to rank one kind of rape as worse than another,” you kind of have a history of establishing said heirarchy beyond today’s little twitter escapade (where, to be clear, you did rank experiences of sexual assault).

You yourself were a victim of child molestation when a teacher put his hands down your shorts. That is unconscionable. But when you discuss it, you refer to what you experienced as "mild pedophilia" (there's that darn "mild" cropping up again. . .) and claim that the most notorious cases of pedophilia involving rape should not be bracketed with “just mild touching up.”

But here’s the thing about child molestation: it’s never “mild.” Full stop. And while you’re more than welcome to express your opinions and share your experiences—the more people who draw these issues into the light, in fact, the better we can confront them—please recognize that rape is not an objective experience. So maybe you think that your experience didn’t have “any lasting effects.” Fine. But that’s you.

Sexual violence writ large, however, cannot be poured into a beaker and measured by some universal objective. And to suggest that there is a hierarchy of rape is triggering, invalidating, and counterproductive. Way too many (read: most) survivors grapple with the reality of having been raped by shaming and blaming themselves into thinking it was their fault without some 73 year-old white dude tweeting about how "stranger rape at knifepoint" trumps date rape.

(So is it worse to steal £1 from an old woman than her entire nest egg? Yup. Because that’s something that is quantifiable.)

By all means, spout and apply your "LOGIC" however you see fit, Dr. Dawkins. But please don’t be surprised by the backlash you get from others or turn derisive when they share theirs.

Maybe you could just stick to biology?

If you like this article, please share it! Your clicks keep us alive!
Tags
richard dawkins
Rape
child molestation
pedophilia
victim blaming