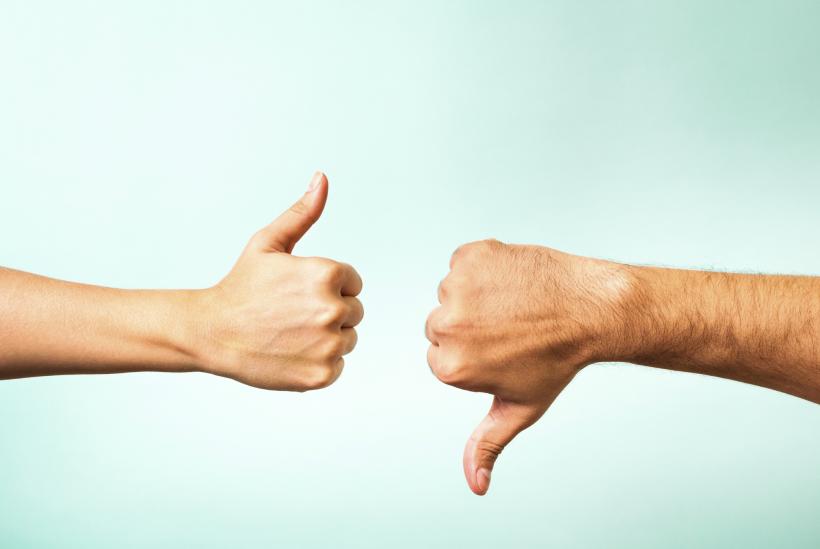 Settle For Love is the rare dating site actually—dare we say it—doing something different. We might even utter the word revolutionary. It isn't striving to be the next OkCupid or eHarmony—it especially doesn’t want to be the next Tinder.

Settle For Love asks its users to list both their pros (can deep throat a banana, can make a soufflé, fluent in Sanskrit) and cons (comes quickly, leaves underwear on the bathroom floor, hates puppies)—and post both good and bad pictures. When it comes to online profiles, every dating expert encourages singles to sell themselves as positively as humanly possible. Settle For Love asks singles to do, well, the complete opposite.

Founder by high school pals David Wheeler (a 30-year-old single man) and Jacob Thompson (a married software engineer), Wheeler started the site because he was surprised (seriously!) by the content he discovered with online dating.

"We were just laughing at some of this. We couldn't believe people would just lie and be so fake. I got super insecure. [Traditional dating sites are] all about people selling themselves.”

Wheeler’s concern is capital 'R' real. Ask anyone who's tried online dating; we’ve all been baited-and-switched. It's tricky. We want to woo potential suitors, but when it comes to dealbreakers, traditional dating profiles give us enough information to handily obscure the big ones, including everything from what the person actually looks like and if they have or want kids, to smoking and drinking habits, (not-so-gainful) employment, an obnoxious laugh, and their pet situation.

Settle For Love takes things to the next level; instead of proffering your very best (maybe delusional) self, they encourage you to tell it like it is—users are asked to list their cons:

(I will never date someone who is stubborn sometimes. #saidnooneever)

I will want to take your clothes off, everyday, all day long. Lol.

I tend to work too many hours.

(Several profiles listed this in one way or another. I guess someone who is needy might not be interested in this person, but aren’t we all busy?)

I don't settle for less when it’s about loyalty.

(This person probably isn’t into swinging.)

I'm a crappy volleyball player...a little afraid of the ball.

(If you’re prioritizing being a good volleyball player in your search, being single is probably the least of your problems.)

(Sarcasm can be hilarious.)

Users are also asked what they would settle for-

One who has a job and bathes regularly. Also needs to go to his job on a regular basis.

(Did her last boyfriend stay home from work all day without having showered in four days?)

Most things—just don't be crazy, evil, or have poor hygiene.

I don't like liars and I can't tolerate smoke.

Someone that is not perfect.

I don't mind someone slightly overweight or nerdy.

(This might be one of the few people on the site who actually answered the question properly.)

I'll be honest. Most of the site members have a sore lack of reading comprehension skills. Instead of writing what they would settle for, they either listed undesirable qualities or wrote what their ideal match would be, which for the most part was a generally nice person with good hygiene.

It feels like a lot of these folks have had some seriously stinky dates.

While I want to love the attempt at removing artifice in the search for love, it also seems like a pipe-dream for a number of reasons.

First, there's the honesty factor. Assuming Settle For Love gets more members on board (here's hoping to better direction-following!) we're wondering if people are actually going to reveal their true pros and cons? I mean, do we actually even know what those are? And if you want to get all cerebral about it, what I perceive as a pro (my operatic singing voice or penchant for heated debates) might be a huge turn-off to a potential partner. And vice versa.

Self-perceived cons are a whole other story; it’s not that hard to admit that you squeeze the toothpaste from the wrong side of the tube or that you read the entire Fifty Shades trilogy—twice. But people are generally more hesitant to admit that they have daddy issues, can't be trusted with a secret, or kind of hate children.

We also don't always want to admit what we would and wouldn’t settle for.

We say we’d settle someone who has an issue with pre-mature ejaculation (sex isn't everything!) until we haven’t had an orgasm in four months . . .

Many people might believe they’d be okay with someone who has their ex’s name tattooed on their finger . . . until they start fantasizing about cutting that finger off.

While the motto of the site is something we can all get behind—who doesn't want to “embrace imperfection”?—I just don't think it works. Forgive me for saying so, but I just can't help it. The concept of the site and the overall vibe of its members feels like the last stop on the train to Lonelyville.

While Wheeler says, “If you're more upfront with people about who you really are, you're more likely to meet the right person,” he is only partially right. Who we are and finding the "right person" is far more complicated than simply being upfront about our imperfections. And like we mentioned, flaws—like beauty and everything else on the goddamn planet—are in the eyes of the beholder.

Furthermore, because the site puts such an emphasis on the negative, it’s hard to see the positive and give someone a chance. Also, while it’s important to get certain deal breakers out of the way, part of a relationship is slowly learning what the other person’s imperfections are and embracing them in time—in context alongside all the wonderful things—not learning every single quirk upfront. That's a bit daunting.

So I guess we're all back to square one. Weird, flawed, strung out, and hungry for love. But hey, at least we're all in it together.

If you like this article, please share it! Your clicks keep us alive!
Tags
settle for love
dating app
dating
Love
Relationships
online dating
the problem with online dating
everyone lies in their dating profiles