Any Way You Slice It: A Trans Woman Reflects On Amputation Fetish 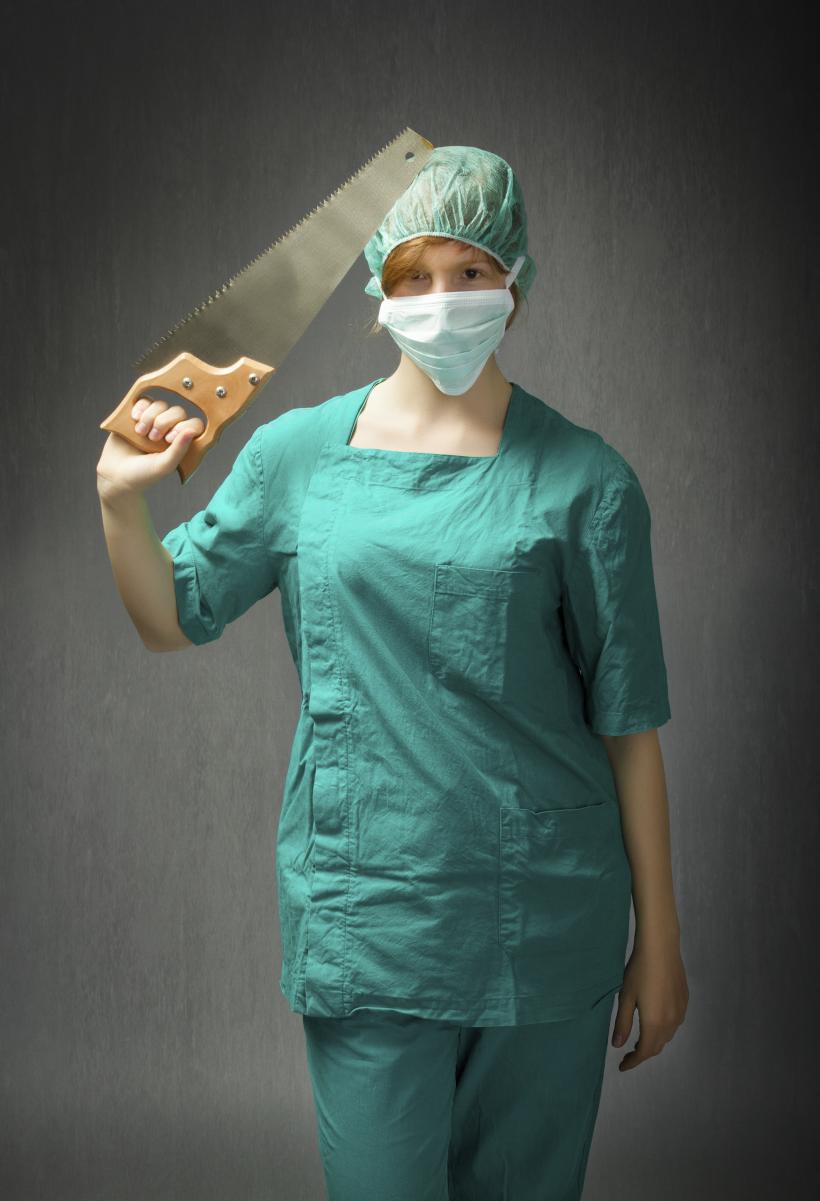 To her credit, my neighbor is taking this—finding me on the sidewalk in my underwear, covered in rust and oil, banging a rock against the blade of a three-foot saw—pretty well. Perhaps it’s relief: There's one more person she can add to her “people too stupid to kill me in my sleep” list. She turns around and goes back inside without another word. She doesn’t want to give me any more hints.

I wait until I can’t see my neighbr through her window anymore and then grab a bigger, wider rock off of her porch.

The saw's almost ready. Once she’s sufficiently dulled from the rock rubbing against her teeth, I can give her a name (I like to go with names from video games—my ukulele is Chell) and let her sleep inside. This will save me a lot of WD-40.

I’m a musical saw player. I am preparing to compose and rehearse my submission to the 2015 Musical Saw Festival in New York. And I need another saw for the trio.

The blade-dulling (yes that's what I was up to on the sidewalk) isn’t necessary to play the saw—unless, like me, you have a tendency to faint during your performances. Honestly it’s easier that way; a helmet, though practical for when you fall and hit your head, ruins your hair and makes it hard to hear yourself.

I dull the hell out of my saws because I have apotemnophobia. I have an intense, irrational fear of amputation. I threw up trying to read Geek Love. I get light-headed in Halloween stores.

As it so happens, trans women are often believed to be stuck in the throes of acromotophilia—an amputation fetish. People believe that body integrity disorder—the feeling that one is oppressed by one of their own limbs—is at the crux of the decision, not a desire to actually identify as a gender other than that which they were assigned at birth. They want it with all of the closure, but none of that messy “sex” stuff. Great taste, less filling!

To be a trans person is to have your face repeatedly pressed into a psychiatric textbook by cousins and strangers on the Internet who shout “this is what you are, this is what you do!” over your protests over not having enough air.

Apparently my indecision on whether to wear boy shorts or panties is someone else’s psychological thriller.

I identify as non-op, as in “does not wish to seek gender reconstructive surgery.” To not have a penis anymore would greatly aid in dressing the way I want, and having the sort of sex I want, but so will not having an inevitable violent tantrum mid-operation.

(And maybe my life too. There's a lot of blood in there.)

But apparently if I don’t have a vagina then I’m not “a real woman” and if I don’t want a vagina then I’m not a real “trans woman” and you’re all really putting me in a bind here. You're forcing me to put the recognition of my gender in the hands of men who spend seven years in college taking an oath that they won’t ever hurt anybody, but often refuse to treat trans women in their ERs (for issues unrelated to their gender) because they saw Silence of the Lambs once and that was just so creepy, guys!

“Well, I want you to live your truth, but I just don’t agree with cutting a part of yourself off.” Neither do I necessarily, but thank you for your input strawman cisgender friend who could easily be any of 20 people I went to college with.

When I, at six years old, stared over the terrace of my childhood home in rural Germany and thought to myself, “I want to be a girl, I will live as a girl,” I had no inkling of surgery, or even hormones. I knew I wanted to wear dresses and be one of a pair of brides in a wedding.

I did not identify with having a woman’s body in spite of my cock but rather, in ignorance of it. My cock sits below my eyebrows, my lips, my collarbone, my curves, my nails—any one of these have more of my “gender” contained in them than my genitals would, regardless of how they were configured.

I have spent more time contemplating the arch of my eyebrow than I have whether or not I want a vagina, though I’m willing to bet nothing beats the amount of thought-time you’ve put into whether or not I have or should have a vagina.

And let’s say I do the years of therapy it would take to overcome my irrational terror at having my limbs cut away from me while I sleep and raise the money for a vaginoplasty . . . wouldn’t I just be buying into a biological essentialist notion of womanhood that boils a woman down to her parts? All so you and the piss babies over at South Park can stretch out a couple more chuckles over my delusions and lack of a womb? I don't think so.

Does my fear occasionally manifest in strange sexual fantasies where a buxom nurse ties me up and slaps me around a bit before giving me an orchiectomy with a straightedge razor while she kisses me on the mouth? Yes. Did you want or even need to know this? Nah. But fear informs a lot of our sexual and gender identity. Resisting it, confronting it, building our expression—like a wall—keeps the fear out.

Whatever our fears, however they manifest into our identity, we should be unafraid to share them.

I am scared of losing my arm or my foot, and that a surgeon will not stop at my genitals—I keep my saws, blades dulled, in a locked drawer so no one can use them on me while I’m sleeping. I don’t want vaginoplasty and that’s OK.

A trans woman should have access to surgery if that’s what she wants. Even Andrea Dworkin agrees with me on this. But with that access, with that agency that places that trust in women, also comes affording women the agency to not pee ourselves in a plastic surgeon’s office when he starts to describe how the procedure will work.

Just think of the upholstery cleaners.