Raising A Glass To Grace Gelder: First Woman In Britain To Marry Herself 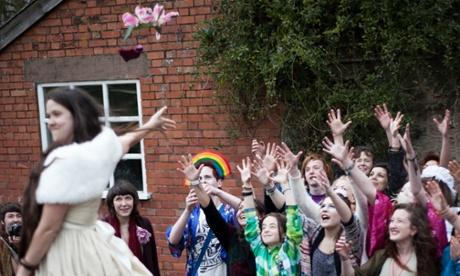 So I wrote this piece about how I’ve been single for a long time. Like for years. And how I feel that this population I genuinely happily belong to—those of us who, for whatever reason, are and have been single for a while—never get discussed, or at least not in a flattering or reasonable light. The piece was picked up by the Huffington Post and it appears to be resonating. People—both, for the record, women and men—have actually taken the time to track down my email address and let me know how much the piece meant to them.

Given that I generally just receive sexist-infused “love” mail along the lines of being called a stupid cow or a “boring little Stalinist” (which, misogyny aside, bothers me most because I. am. not. boring.), it’s hard for me to describe how much receiving such positive feedback means. Moreover, people from all over the world reaching out to say how my piece gave them hope or eased their soul has refocused my attention on how poorly single people are often viewed and treated.

From TV to movies to just banter with friends, we’re often the butt of jokes—somehow our lives are lacking, incomplete. Somehow because we’re not in a relationship, our existences are sad, empty and pointless. Perhaps even worse than the jokes are the empathetic looks from family members. “Hang in there,” they say with their kind, glinting eyes, “someday you’ll find someone.”

My point, beyond just ef yeah singles I’m here for you and I wish we could have a giant, kick-ass global coffee date, is that this notion of being single and genuinely-happy-to-the-core still seems to be quite the radical one in many circles. Which is why I think London-based photographer Grace Gelder is making such waves. She’s the first woman in Britain to marry herself.

And she didn’t just take herself quietly to City Hall for a simple ceremony. The woman went all out.

Not only did she propose to herself on a park bench, she staged a full wedding ceremony with some 50 guests. She bought a dress. She bought a ring. She rehearsed her vows. She even kissed the bride (with the aid of a mirror).

Apparently, after being single for six years, Gelder had built up a brilliant relationship with herself. And so she wanted to make it official. Inspired by the Björk song "Isobel" and its line "My name's Isobel, married to myself" she decided to walk down the aisle to herself.

In her Guardian essay, “I Married Myself,” she says:

"A few did comment, in a light-hearted way, that it was a bit narcissistic. Obviously, if you have just announced you’re marrying yourself, it is plainly a statement of self-love, and I was under no illusion how self-indulgent that might appear. But I was completely comfortable with my motivations. I’d been on a journey of personal development using meditation, dance and performance to increase my self-awareness.”

The wedding, though awesome, is of course not legally binding. Nor does it, at all, preclude her from marrying someone else someday:

“My self-married status—meaningless though it may remain in the eyes of the law—has also given me this great sense of clarity. I seem to sense much more clearly than before if something is worth pursuing or best left alone. And just because I married myself, it doesn’t mean that I’m not open to the idea of sharing a wedding with someone else one day.”

That said, while I obviously salute Gelder and her self-empowering efforts, and I absolutely love weddings, I don’t think I’ll be taking myself down an aisle anytime soon (dress shopping isn’t really my thing). I'm mostly just stoked that she, in her "wacky" way, is giving us no-really-we're-totally-fine, fulfilled, self-loving singletons a bit more visibility—something, I've relearned recently, we still very much need.

If you like this article, please share it! Your clicks keep us alive!
Tags
Grace Gelder
marriage
weddings
single
Relationships
the guardian
I married myself
empowerment
Love