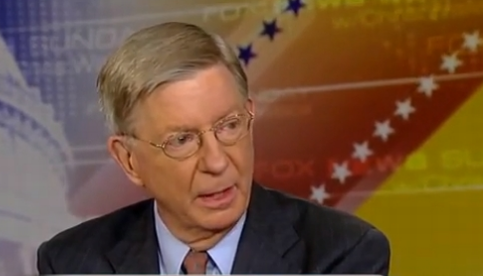 It's always nice to have a privileged white man explain things to us lowly vagina-clad guppies swimming aimlessly in the vast pond of mass media.

In fact, I can think of few things nicer.

Take journalist George Will: thanks to his helpful Washington Post piece from last summer, rape victims everywhere learned that their PTSD-inducing experience earned them a "coveted status." Why? Oh, because of the way "progressives" were handling college sexual assault cases.

Despite the controversy and understandable outpour of what-in-god's-name-were-you-thinking, Michigan State University has tapped Will as this year's commencement speaker. Yup. Oh, and not only that, but he's receiving an honorary doctoral degree at the ceremony and rumor has it his appearance will garner him a cool $40,000.

While officials swear that he was selected before the offensive (and utterly fallacious) piece was published . . . I think we can all agree this would be a "deal-breaker" situation, warranting, I don't know, an email, a phone call, an arm-wrestling match, whatever. Just tell the man that due to his highly controversial remarks of an outlandishly misogynistic nature, the deal's off. You're no longer speaking at our students' graduation.

Did we mention that Michigan State University is also currently under federal investigation for its handling of sexual assault accusations?! The irony is just palpable.

Happily we're not the only ones knocking our heads against the wall about this.

Activist group UltraViolet—which champions "equality at a higher frequency"—has already garnered 40,000 signatures on their petition to ban Will from speaking and students from MSU are actively protesting the decision, demanding that Will be dropped from the roster.

Despite the outcry and the very fact that a commencement ceremony is for the students and the students are offended by Will's very presence on this little blue planet . . . the school still stands by it's decision and has made no move to cancel his appearance.

Mysteries abound. Amid the endless he-said, she-said, we caught up with one of the organizers of the protest—Emily Gillingham—a third-year MSU law student and one of the protest organizers to better understand exactly what the student's perspective is.

What's been the general reaction from your classmates regarding MSU's decision to honor George Will at the commencement ceremony?

Initially, there was a lot of surprise. I honestly thought that it was an Onion article when the announcement first hit my Facebook page, since MSU is currently under federal investigation for its handling of sexual assault on campus.

As the week has drawn on, I've heard a lot of sadness from the survivors on campus, and feelings and they aren't being heard by the administration.

I'm also seeing a lot of reaction from students and alumni that they are embarrassed and upset that Will is presumably being paid his standard rate of over $40K despite his remarks. People are dissatisfied with the response from the administration that has largely focused on academia supporting discourse and the exchange of ideas, no matter how unpopular. There is a sense that the school must draw a line somewhere for what ideas disqualify someone from being an appropriate commencement speaker, and they are surprised and disappointed that that line was not drawn on the side of supporting, believing, and protecting survivors of sexual assault on campus.

Besides (understandable) outrage, did anything else inspire you to lead this movement?

Mainly just the outrage. I want survivors to know that the student body believes and supports them, even if the administration is honoring someone who doesn't . . . with a doctoral degree.

If you had George Will in front of you right now, at this moment, what would you say to him?

I would let him know what I've learned from survivors this week: the ways that the administration failed to make them feel heard and safe; the wait for sexual assault counseling on campus of around a month; and the fact that survivors see him as part of the problem and are abandoning commencement, a day designed to acknowledge their academic achievements, because his views are so hurtful to them. I would ask that if he insists on speaking on Saturday, that he donate any speaking fee to the MSU Sexual Assault Program, so that they can hire an additional counselor.

While I find Will basically deplorable, everyone makes mistakes—even catastrophic, soul-crushing ones. Because of this lingering notion, I was duly impressed by Gillingham's last answer. Perhaps educating Will on the matter could penetrate his misandry-clogged mind. Then again, maybe not.

And just to reiterate, I think we can all agree it's simply bad form to welcome a speaker that openly offends the vast population of the student body. Last time I checked the students (OK their families) pay the school—and handsomely!—for said education. If not for their presence, and desire for a degree, the school doesn't exist. There's no staff to employ. These students deserve more respect—and they aren't receiving it. We're gonna go ahead and say this is unacceptable.

Sometimes, "doing the right thing" is muddy, confusing. This isn't one of those times. Get it together, MSU.