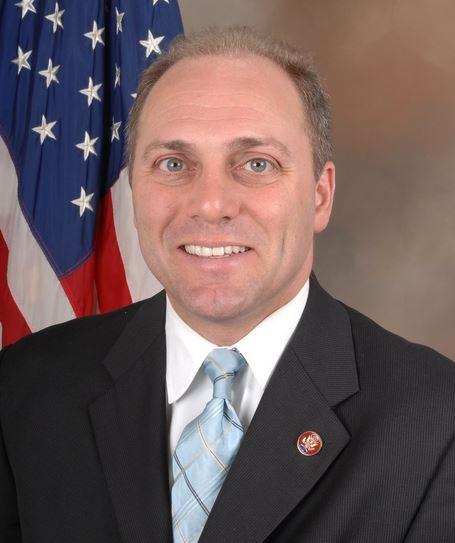 House of Cards preview? Sneak peek into next week's episode of Scandal? No baby, this is real life.

You've probably heard that House Majority Whip Steve Scalise spoke at a white supremacist convention back in 2002. The media is working hard to push and spin the story—and frankly, as so often happens with such stories, things have become . . . confusing. Murky even.

To make sense of the ongoing controversy, here are seven quick facts to know. Sometimes, in politics, real life is even messier and more disturbing than the darkest of fiction.

1. Let's get this out of the way up top: Scalise has admitted to speaking at a European-American Unity and Rights Organization (EURO) convention in Lousiana in 2002. Though there are conflicting eyewitness reports, Scalise has stated that he did lead a talk. Full stop.

2. EURO is a white supremacist group that's been designated as an "Active White Nationalist Group" by the Southern Poverty Law Center. And though its website is no longer running, its founder—David Duke; we'll come back to him—has no problem expressing his anti-Semitic views on his own website.

Here's one quote, from his "Help Dr. Duke's Work" page:

"Zionist Globalism is not only an enemy of the European people, but also the heritage, freedom and independence of all peoples."

Here's another, from a post about an appearance he made on the Bill O'Reilly show:

3. Scalise is feigning innocence in this scandal, but his ignorance isn't plausible. One claim he's made is that he was opposing a potential tax plan called the Stelly Plan. Problem? This economic measure was proposed after the EURO convention. Perhaps Scalise is psychic? Nah. If he were, this talent would have prevented him from attending the EURO conference in the first place. You see, Scalise also claims that—back in 2002—we didn't have Google (that's a lie), and he didn't bother checking what the organization was before agreeing to attend the conference.

Consider for a moment that Scalise received a BS in Computer Sciences in 1989 and later worked as systems engineer—yet he claims he couldn't handle a Google search? That's not just dubious, but unbelievable.

Despite this, Scalise is adament that he abhors hate groups. Le sigh.

4. Certain members of the GOP are defending Scalise. Even members of cultural and racial minorities. Culprits?

Congressman-elect Lee Zeldin: This guy is literally the only Jewish Republican in Congress. Yet, this New Yorker assured the press that the Scalise situation "doesn’t undercut Republican progress towards reaching minorities and the Jewish community." Zeldin stated on Fox News that Congress is making progress in becoming more diverse (wait, isn't he the only Jewish guy?) and the ever-evil media is spinning this to make Republicans look bad.

House Speak John Boehner: OK, yeah, we're not surprised. First of all, Boehner excused Scalise's weak defenses ("I think Mr. Scalise made it clear that he made an error in judgment. He spoke to a group, not clear who they actually were") before launching into a character assessment: "Now, I know this man. I work with him. I know what’s in his heart. He’s a decent honest person who made a mistake. We’ve all made mistakes​."

To be clear, associating with a known white supremacist group is a simple "mistake"—and it's certainly not the kind of mistake we all make. If it were, what a sick sad world we'd live in.

Representative-elect Mia Love: Alas, even the GOP's first female black representative is siding with Scalise. Love—hailing from Utah—more or less aligned with Boehner's sentiments. "My first thought," she explained, "was this was 12 years ago. It’s interesting that it’s coming up now​." Nah, 'Murica loves a good scandal. Like Zeldin, Love expressed distaste for EURO and similar groups. She then went on to demonstrate respect for Scalise's "humility" (wait, what?) and even argued that he deserves to stay in his role as House Majority Whip.

5. Enter Bill O'Reilly. The (in)famous talk show host invited David Duke (the founder of EURO, see #2) to his show. O'Reilly seems to be operating under the assumption that Scalise didn't speak at the event, and that this whole situation is a big misunderstanding. At the beginning of the interview, O'Reilly was nice to Duke. At some point, he even mentioned that the two had been acquainted for some time. Duke was not present at the convention that Scalise attended. However, Duke openly stated that Scalise was scheduled to speak—though he didn't witness it. When this fact is dropped, O'Reilly, well, loses it, rather gloriously ripping into Duke for being a white supremacist.

6. Scalise is facing serious backlash. Notably, Representative John Lewis (who is something of a civil rights icon) believes that Scalise owes an apology to Congress. "I think somehow and in some way," Lewis told the Congressional Black Caucus, "[Scalise] should come clean and say what he did and apologize to members of Congress, to his colleagues on both the Republican and the Democratic side of the aisle​." Lewis—a Democrat from Georgia—does not believe anything that anything Scalise has said so far equates to an apology.

Other Democrats (like Nancy Pelosi and Press Secretary Josh Earnest) have also heatedly attacked Scalise, as has Politico, which referred to him as "damaged goods." But while while that may come as no surprise, some Republicans, too, have joined the backlash fray.

Even Sarah Palin took to Facebook to call Scalise's defenses "disgusting and wrong." And oh, it gets better. Ultra-conservative political activist Erick Erickson has also refused to drink the Scalise-Boehner Kool-Aid. Erickson—kinder than I, for once—stated that he didn't think Scalise was racist. Rather, "[Scalise], like much of the Republican leadership, is so focused on putting electability over principle that it trips up his judgment. And this situation with Duke [and EURO] is another example of that.​"

7. It's unfortunate that the House Majority Whip is caught in this scandal. Let's talk Scalise's influence. As stated earlier, Scalise is the House Majority Whip, which makes him the GOP's third highest-ranking representative. The position of Whip is a powerful one. Very powerful. Do you watch House of Cards? Frances Underwood begins the series as Majority House Whip (only, for the Democrats). Though it's (wildly) unlikely a Whip would climb the ranks like Underwood did, the prominence of the position is still noteworthy.

See, Whips are basically professional political bullies. Their job is to assure that the members of their party (in Scalise's case, the Republicans) vote along party lines in legislative matters. Like Underwood's fictional portrayal, bribery and manipulation are very much normal in this sphere. The votes can make or break the passing of a law. A conversation between a Whip and a House member has the potential to alter the course of countless lives.

The Republican party snagged the majority of the seats last election, following the previous Democratic reign, and it's mighty concerned about the 2016 elections, It doesn't need a scandal. Yet the way it's handled the situation—by closing rank and refusing to take a stand against the affiliation—has only served to make matters worse, raising legitimate questions about lingering and troubling racism (as The Daily Beast put it, "The fact that Scalise still has his leadership gig tells us that the key stakeholders and constituencies within the GOP aren’t particularly bothered by the fact that he spoke to white supremacists and indeed might be one himself").

When Sarah Palin and Bill O'Reilly are the closest things your party has to reason . . . you know there's something wrong.