Why We Should Celebrate The Bared Penises Of Paris Fashion Week 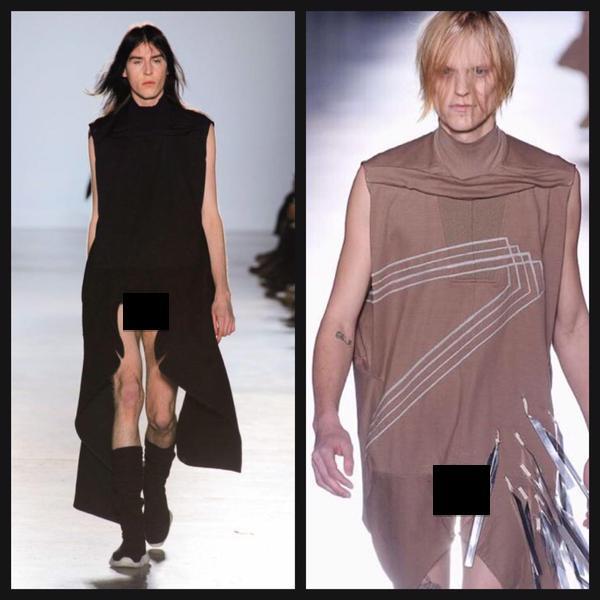 Avoid fashion all you want, but the madness of this artistic sphere will nonetheless affect you somehow. Runway trends trickle down from couture "Ehmigawd-no-one-would-actually-wear-that" designs to staple pieces at Forever 21 stores. Beyond clothing, fashion can at times even create social change. In the instance of Rick Owens—I mean, #DickOwens—and his infamous penis-baring pieces at Paris' fashion week, I really hope fashion does in fact affect societal winds.

If you've not been privy to this headline-grabbing debacle (or have been choosing to feign ignorance) allow me to fill you in visually: 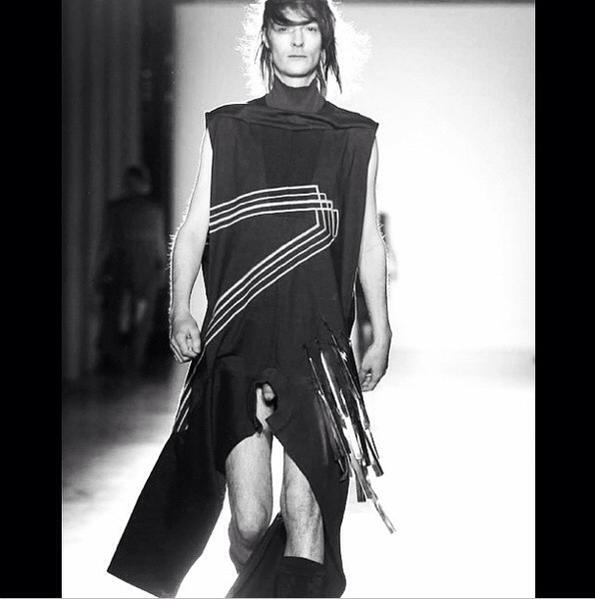 Flaccid penises hanging amidst the dramatic drapings in menswear? Yup, that happened. And I'm glad it did. As women, we don't want men to mock or scrutinize our bodies. Thanks to social movements—like the various anti-street harassment campaigns and #YesAllWomen—it's ever-so-gradually becoming less culturally acceptable to do this. Don't misunderstand me, we still have a ways to go (I took a five-minute walk outside while writing this and received two hollers and three under-the-breath remarks from strange men—all within five minutes).

But it seems to me that women (regardless of sexual orientation) could also cut down on the mocking of men and their members. I mean, didn't your kindergarten teacher tell ya to treat others the way you want to be treated?

Perhaps it's these influences that allow room for negativity amongst women regarding penis "imperfections." Everything from size, shape, appearance, endurance and so on is scrutinized by women. Tons of women openly detest visible veins. Not surprisingly, many men express insecurities about such features.

With all the pressure men face just regarding the look of their dick, it's no surprise that—sometimes—a man loses his erection during sex. It's normal, and happens for a variety of reasons (including: stress, tobacco use, health issues, medication, etc.), but the sight of a suddenly flaccid dick is open to mockery. Prior to writing this, I took a quick glance at some Internet forums asking folks to reveal their reactions to less-than-satisfactory bouts of sex. Some commented back actual things they said to these poor dudes. Many women are outright cruel when a man loses an erection during sex, and other ladies sometimes applaud this! Granted, no one likes a good thing to end, but insensitivity doesn't help. Here's a sampling of the worst offenders:

"Well, that wasn't worth another notch on my belt."

"I just thought that would last longer."

"You didn't drink whisky tonight, but your dick sure did!"

"Damnit!! *Throws arms up in frustration*"

When I see the penises flouncing about in the Rick Owens show pictures, I think of all these alien pressures that I will never experience. While I wouldn't argue that they are worse than the body scrutiny of a woman (how would I even begin to know?), they are significant in the pain and anxiety wrought. Thus it's my hope Owens' work will be a step forward—akin to Free the Nipple's boob embracing—in normalizing the appearance of penises.

Perhaps us women can reach out to men and find common ground in the discomfort of scrutiny. Like: "Hey dude, you know that shame you feel when a woman laughs at the size of your dick? That's how I feel when you joke about my weight. Not cool, eh?" Feminism is about gender equality—which is harder to achieve when we cruelly deride and objectify men based on their (penises') appearances.