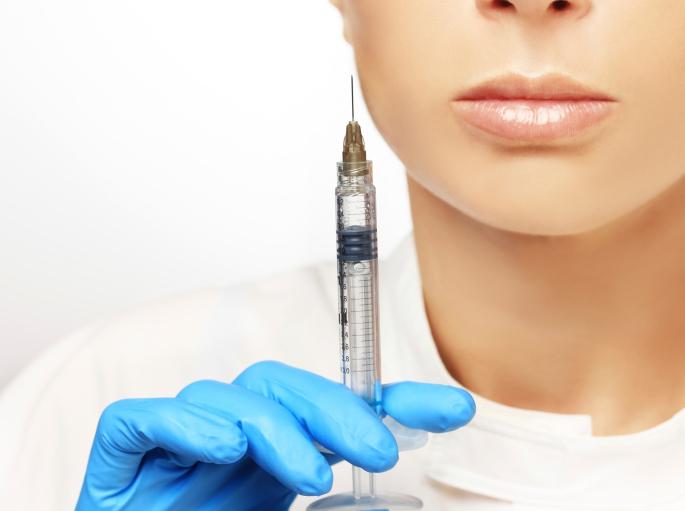 We aren't born with an innate hatred of any part of ourselves. That shit is learned.

Here's a scenario you are more than likely familiar with: You open your phone camera to snap a quick picture and it's on selfie mode (I was using it to check my makeup—don't you judge me) and oh holy night who turned your one chin into TWO?

Two Chin Syndrome is shocking and unwelcome—to say the least. And if it's got you feeling blue, now there's a cure for that.

No, but really, there is actually a cure for that. The FDA has approved a new drug for that singular purpose. Banish your double chin with the new and long anticipated Chin Be Gone. Insidious, I know.

Does anyone else see a problem with this? Hopefully it's not just me. Now, let me preface this by saying I don't love my double chin. It's not as if each day when I awake I greet my Double Chin with a hearty "Hey there Double Chin. Boy I sure did miss you when I took that selfie from two feet above my head in an obvious attempt to convince the world that you don't exist."

Downside: dissolved fat. In your face.

Let's just presume for a moment that you can actually push yourself past both the ACID and the DISSOLVING FAT. You too can banish your double chin!

Well, I'm guessing because whoever invented Chin Be Gone (and innumerable others) have made you believe that your chin(s) are so unsightly, so ghastly, so embarrassing that you ought to hustle your butt (which probably also needs fixing, by the way) down to your nearest plastic surgeon and inject some deoxycholic acid into your face. Is this what we've evolved (by which I actually mean devolved) into? A culture that will pay someone to inject acid into our face, because we simply cannot stand having two chins? In other countries that's called torture.

If you are strongly in the "I love acid" camp, I'm not trying to make you feel bad (okay, I actually sort of am trying to make you feel a little bad). But is there any other thing you can imagine that would be more worthy of your few hundred dollars than some face acid? Anything? Some books maybe? A trip to the beach, perhaps? I'll offer you the benefit of the doubt and say you have so much money that you already have a library and you own a beach. You are so rich that $20 bills line your sock drawer like a lavender sachet, just because you like the smell of money so much that you want your socks to be infused with it. Let's, just for the sake of this discussion, say you actually have that much money. Why do you hate your face so much that you'd want to pay a virtual stranger to put acid in it? Though, to be fair, if you're paying someone to put acid in your face, he or she is probably not a stranger, because you most likely already have a close relationship with your plastic surgeon.

I'll tell you why you hate your face that much . . . Because someone told you to.

We aren't born with an innate hatred of any part of ourselves. That shit is learned. I happen to have really large ears—like Dumbo status big. As a child I never paid a bit of attention to my ears—they worked and that's all I really cared about. At some point people started to make fun of me, and my mom thought it would be a good idea to tape my ears to my head, in a futile effort to get them to stay that way. Bingo. Ear hatred born. And I continued to hate my ears, unconsciously even, until I met my husband and he said, "I LOVE your ears. They are so cute!" Wait, what? No no, my ears are awful. I know they are awful because since the dawn of time everyone has told me so.

Beep beep, back the truck up. Lightbulb moment. Maybe . . . could it be? My ears aren't freakshow horrifying? As it turns out, once I stopped apologizing for my GIGANTIC HORRIFYING Dumbo ears, they just became part of my head. A pretty important part as it turns out, with all the hearing and whatnot.

Let's just imagine for a minute that your two (or three, or whatever number) chins were just part of your head. I mean a pretty important part with that whole being attached to your chin thing. The chin being actually required for the chewing of food, which is actually required for, oh that's right, living.

Oh hey, then you can just avoid the face acid and go buy a book—or 20.