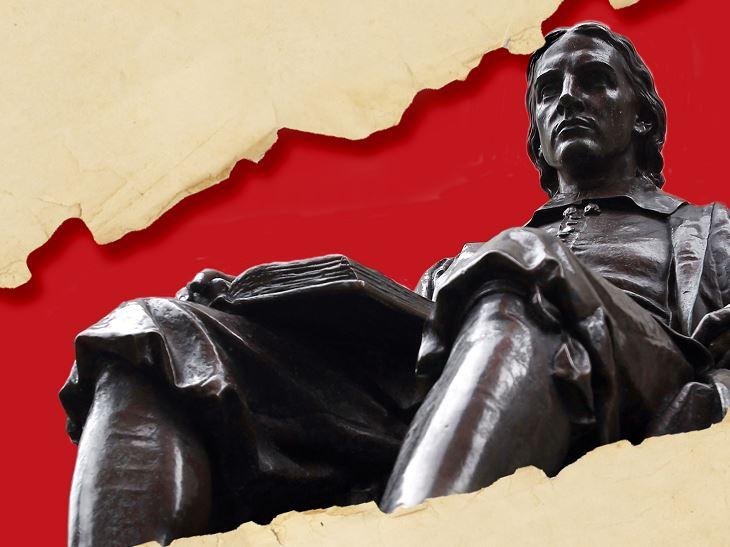 In this excerpt from the upcoming book Verita$, writer Shin Eun-jung provides a chilling inside look at the misogyny of Harvard's early years—and some of its more recent years, as well.

From its origins, Harvard was a university for men, by men, and of men. Even decades after the first wave of feminism had won the right to vote in 1920, Harvard refused to admit women. At that time it was commonly assumed that women's brains were too small to execute complicated intellectual work. So it might be unfair to single out Harvard as particularly harsh to women. Although Harvard questioned women's capacities, it never denied their donations.

From the start, women were important benefactors of Harvard. Lady Mowlson (Anne Radcliffe) was one of the earliest female philanthropists, for whom Radcliffe, the women's educational institute that opened in 1879, was named. As early as 1732, Dorothy Saltonstall donated money for poor scholars. Generous female contributions continued to help Harvard survive financial difficulties. In the middle of the 19th century, a new wave of female supporters desired to enroll at the university that their ancestors had helped. Rather than remaining just generous benefactors, they had dreams to attend Harvard, which were considered a dangerous potential disruption of the social order by most of the gentlemen leading society. Subsequently, Harvard's history involved brutal quarrels as women, blacks, and minorities tried to climb over Harvard's high threshold while the white establishment did all they could to obstruct them.

Many women who tried to enroll at Harvard drank a bitter cup of disappointment. In 1848, Harriot K. Hunt, who had practiced medicine in Boston for 15 years, applied to Harvard Medical School but failed because of student protests. Three years later, after students passed resolutions opposing her being allowed to attend lectures, she wrote, "The class at Harvard in 1851, have purchased for themselves a notoriety they will not covet in years to come." In 1879, a $10,000 fund was offered to the Medical School on the condition of women's admission, but it was turned down. For more than a century, protests and furious arguments continued in connection with women's acceptance into Harvard. This struggle wasn't limited to the Harvard Medical School; the dispute over coeducation brought huge debates within the community.

Charles Eliot, who took office as the president of Harvard in 1869, firmly believed coeducation was impossible. His philosophy was made crystal clear in his inaugural address: "The Corporation will not receive woman as students into the College proper, nor into any school whose discipline requires residence near the school. The difficulties involved in a common residence of hundreds of young men and women of immature character and marriageable age are very grave. The necessary police regulations are exceedingly burdensome. . . . The world knows next to nothing about the natural mental capacities of the female sex."

As a sophisticated scientist, Eliot dodged the mystery of women's mental capacities, but if you read his words carefully, you can see he was just worried about male students being disturbed by females. Although many feminists criticized his narrowmindedness, Eliot wasn't alone. It was common sense at that time that women were intellectually inferior, that if women received too much education, it would harm their health and create problems for them to have children. 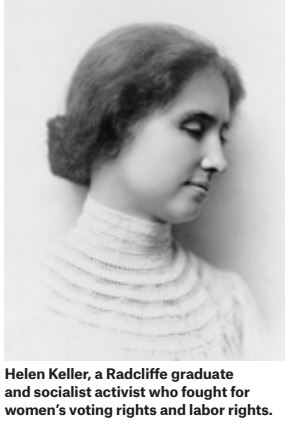 In 1879, the Harvard Annex, a private non-degree program for women taught by Harvard professors, opened. It was welcomed both by women who were thirsty for knowledge and Harvard professors who would receive extra bonuses for repeating the same lectures. Though the Annex successfully enrolled 200 students within 15 years, Eliot and the Corporation remained opposed to a women's department at Harvard. In 1894, the Commonwealth of Massachusetts chartered the Annex as Radcliffe College. Elizabeth Cary Agassiz, the widow of prominent Professor Louis Agassiz, became the first president. As it became one of the most prestigious higher educational institutions for women, Radcliffe produced many distinguished women such as Helen Keller and Gertrude Stein.

Between 1837 and 1889, seven liberal arts colleges for women, the so-called "seven sisters," were founded in the northeastern United States: Mount Holyoke College, Vassar, Smith, Wellesley, Bryn Mawr, Barnard, and Radcliffe. At the same time as women's desire for higher education was undeniable, in 1920, after years of demands, women finally obtained suffrage, changing their social status dramatically. In 1919, Harvard appointed its first female professor, Alice Hamilton, an assistant professor in industrial medicine at Harvard Medical School. The medical school made three conditions for Hamilton's appointment: not to use the Harvard Club, no access to faculty football tickets, and not to march in commencement parades or appear on the commencement stage with university leadership. Hamilton accepted these demands and became the first female faculty member at Harvard. In 1935, when she reached retirement age, Harvard lost its sole female professor and became once again an exclusively male haunt. 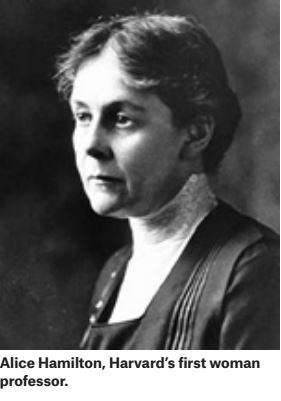 Women were still not allowed to attend classes in Harvard Yard, so Harvard professors used to teach the same material to Radcliffe women after they taught the boys in the yard. This strange tradition continued until World War II, when classes were merged only because there were not enough professors since many had joined the war. Beginning in 1943, Radcliffe students began to take classes in Harvard Yard, and by 1947, most classes became coeducational. In 1948, a historian, Helen Maud Cam, became the first tenured female professor at Harvard.

Until the late 1960s, there remained very few female tenured professors. Margaret Gullette, Radcliffe Class of 1962, remembered that she had no opportunity to study with female professors. "There were no women. I was never taught by a woman when I was an undergraduate. [There was] nobody. There was only one woman faculty member who was a full-time senior faculty person, and she was in astronomy, and I just didn't take astronomy."

In the 1960s, as the civil rights and anti-war movements reached their culmination, feminism unfolded dramatically, producing huge changes in women's lives and stirring up Harvard as well. In 1963, Harvard's Graduate School of Arts and Sciences was opened to women, and Radcliffe students received Harvard diplomas. Nonetheless, the number of male faculty far outnumbered female faculty. The following chart comparing the number of male and female teachers ("officers") at Harvard in the late 1960s clearly demonstrates the imbalance of Harvard's employment policy. 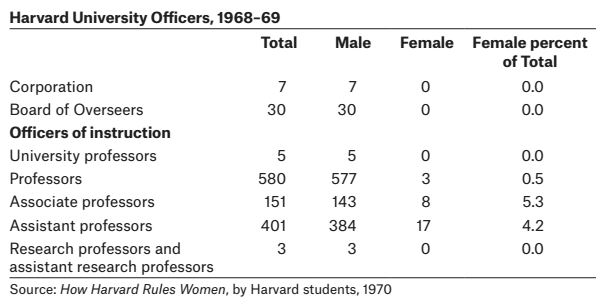 Over the years, Harvard has made dramatic changes. In 1977, Harvard and Radcliffe signed an agreement to merge the two institutions, and 22 years later, they officially became one. Today, more than half of undergraduates are females. To keep pace with these changes, Harvard has tried to hire more female professors. According to Harvard's official records, between 2011 and 2012, some 22% of professors were women, as were 33% of assistants and associates. Considering there were only three women tenured professors in the middle of the 1950s, that is rapid progress.

In 2001, Lawrence Summers became president. During five years of his presidency, the number of tenured female faculty decreased visibly. In 2004, Harvard offered 32 tenured positions, but only four to women. The following year, Summers delivered a remarkable speech in which he explained that innate differences might explain the reason women are less successful in science and math careers. Reactions to his remarks (and to his poor treatment of African American faculty) were so intense that he was compelled to resign. As Harvard tried to clean up the mess Summers left, he was replaced by Drew Gilpin Faust, the first female president in Harvard's history. According to the March 12, 2010, New York Times article "Women Making Gains on Faculty at Harvard," various new programs were created to support women in science and research careers as well as to hire more tenured women professors. Harvard financially supported childcare.

While there is still a long way to go, Harvard is changing. Looking at it today, it is hard to imagine that it was a place exclusively for rich, white males—which it was less than a century ago.

It is not as easy as it used to be to enroll at Harvard just because you were born with a golden ticket. No more discrimination or being forbidden entering into a library because your chromosome is XX. These changes didn't happen automatically but because people struggled and fought continually from inside and outside Harvard. The future of Harvard depends upon what kinds of universities we dream and dare to create. 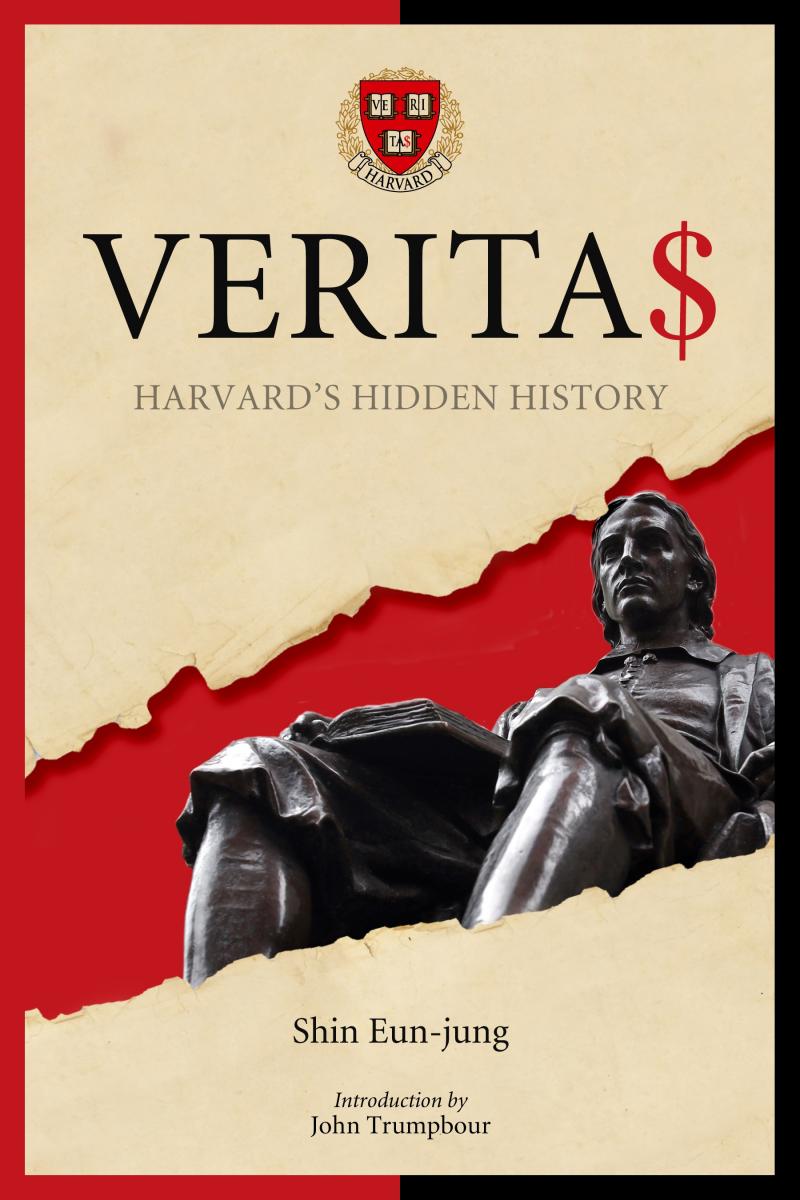 This is a sneak peek from Verita$: Harvard's Hidden History, which will be released by PM Press on July 1, 2015. Pre-order a copy here.