“No Coffee For You": Why Do People Still Feel They Can Judge Pregnant Women? 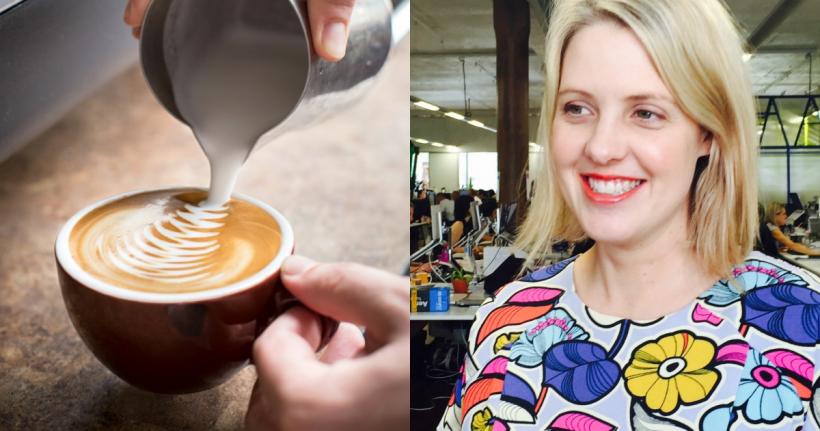 Experiences like Alexandra’s, where a barista undermined her autonomy, explain a lot about why modern motherhood is laced with expectation and guilt. Image: Georgina Dent

As rational and sensible as it is to recognise the futility in placing any emphasis on the unsolicited contributions from strangers, it’s inexplicably hard to avoid.

Last week Alexandra Smith ordered a takeaway coffee from a Sydney café and had her order refused.

“No caffeine for you,” the barista explained, pointing at her stomach.

She was pregnant and flabbergasted. She eventually agreed to a cup of hot milk with a smidge of coffee, more accurately described by her as an “adult babycinno”.

Like Smith, an editor at Fairfax Media, I was a bit shocked to learn of her experience but I was not surprised. Share this story with any mum and chances are she’ll have a story of her own along the same lines. 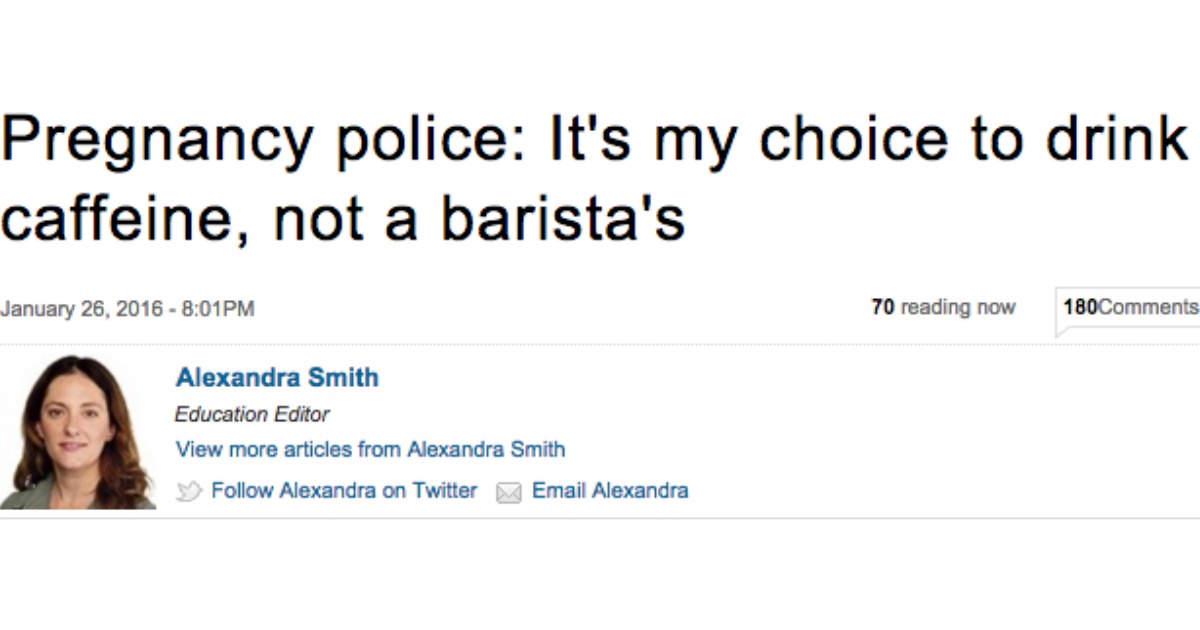 I vividly recall being 30 weeks pregnant with my first baby in a London pub. I was lining up at the bar for a soda water, when the man beside me pointed at my tummy and loudly told me I should be at home. Apparently, that was “where I belonged”.

I can’t remember exactly what I said in reply. I know I stayed in line to order my drink and I know I didn’t go home.

I remember exactly how I felt. My cheeks burned with embarrassment. I felt humiliated and angry. I started mentally justifying why I was allowed to be there.

We are here having dinner with friends. That’s not illegal. I’m not drinking! I’m allowed to be here!!

Despite knowing how wrong and ridiculous it was for a perfect stranger to berate me for daring to be out after dark, I felt guilty. Maybe I should be home. 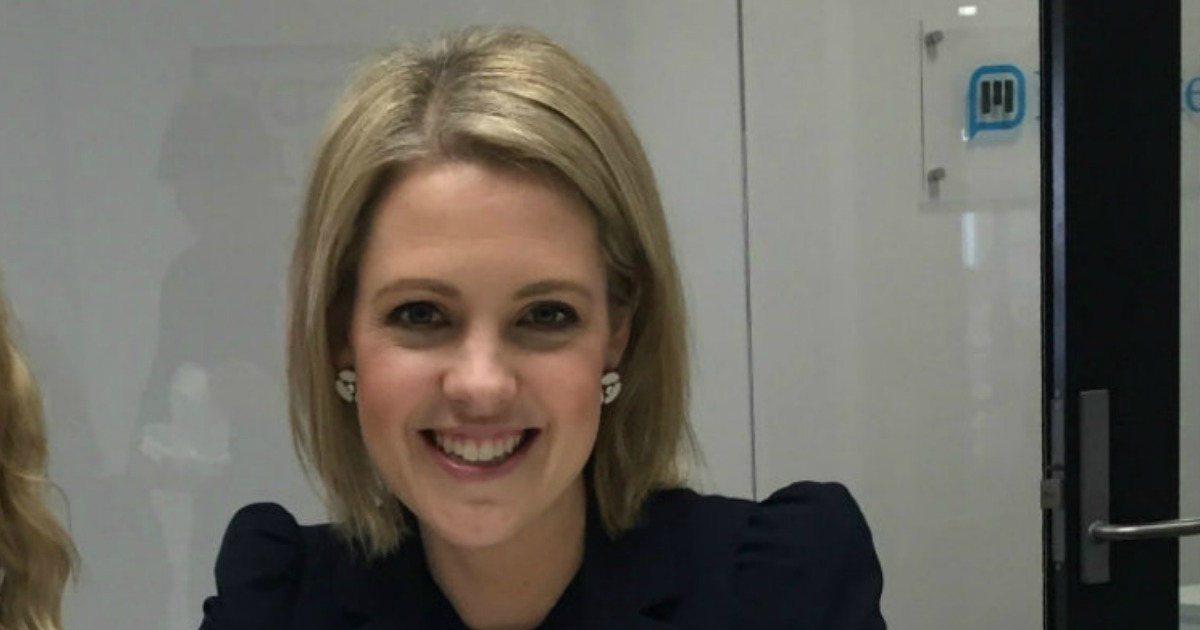 My internal response in that English pub is why Smith’s experience resonated with me. I know why she didn’t just walk out of the café or stand up to the young man’s unwelcome and unnecessary authority.

“I can only assume I was wracked by mother guilt,” she wrote. “My decision to inflict caffeine on my unborn child had been criticised by a stranger.”

In the clear light of day, walking away, she was disappointed and annoyed that she hadn’t held her ground. But as Alexandra discovered, mother guilt can have an awfully powerful pull. Even wholly unfounded guilt about having a cup of coffee or being in a pub is oddly compelling.

As many mothers-to-be quickly learn, carrying a baby is something of a public experience. Your body becomes a talking point and so do your choices. And it continues well beyond the moment your infant vacates your womb.

As rational and sensible as it is to recognise the futility in placing any emphasis on the unsolicited contributions from strangers, it’s inexplicably hard to avoid. 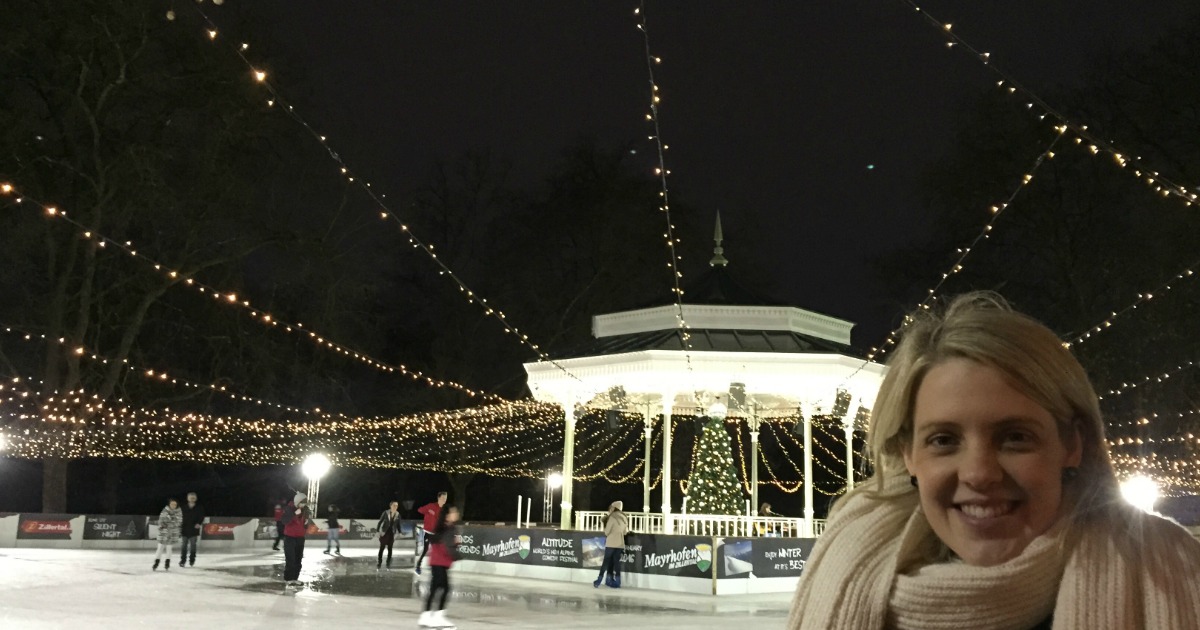 The mere suggestion that you’re not quite up for the task of parenting or not wholly committed to your unborn child’s welfare, cuts through your heart. Even when you know, in your heart of hearts, you are up to the task and know that your commitment is beyond question.

Experiences like Alexandra’s, where a barista undermined her autonomy, explain a lot about why modern motherhood is laced with expectation and guilt.

Women don’t just “imagine” public scrutiny and judgment. They hear it. Most days.

They don’t conceive the so-called Mummy wars because they have nothing better to do. They’re thrust into it them from the moment their bump is visible. 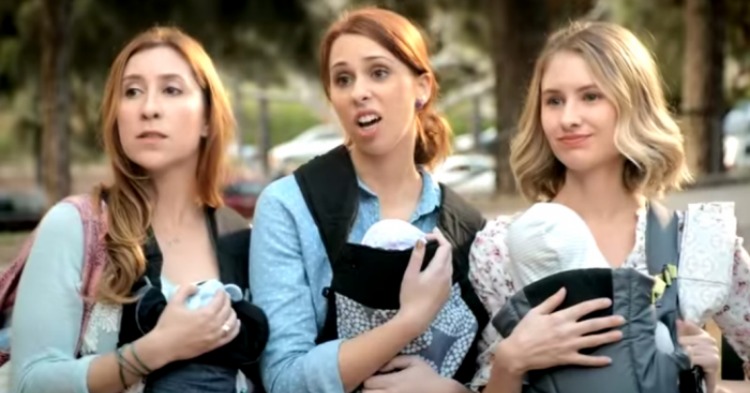 They clutch on to their decisions fiercely – whether it’s drinking coffee, having a c-section, breastfeeding, not breastfeeding, working fulltime, not working at all – lest they need to publicly defend them. And chances are they will have to defend them because these subjects are public fodder.

And it’s madness. There are as many ways to do pregnancy and child rearing as there are parents and children.

As crazy as it seems to spell it out, pregnant women are entitled to do what they determine is best. Chances are they have a doctor or a midwife whose advice they are relying on. So if you’re a barista, a bartender or a stranger on the street and you’re tempted to dish out some counsel to a pregnant woman? Resist.

This post originally appeared on Mamamia. Also from Mamamia:​

No, John Legend “we” are not pregnant. Your wife is.
‘Yes, my bump was small, but it was still very “real”.’

If you like this article, please share it! Your clicks keep us alive!
Tags
pregnancy
policing pregnant people
mummy wars

“No Coffee For You": Why Do People Still Feel They Can Judge Pregnant Women?
Georgina Dent