How I Went From An Eating Disorder To Eating Intuitively 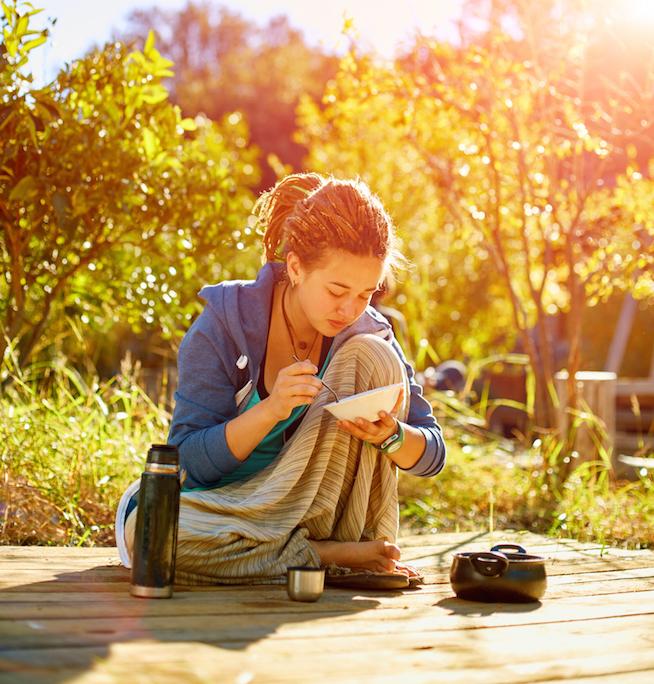 As I began to face my struggles with food, I also started to embrace making food.

Instead of food feeling either like a complete indulgence or a total clinical buzzkill (as it had when I’d gone to a nutritionist), it felt like a holistic practice.

You might not think of food as being a savior in eating disorder recovery, but I have actually found food to be one of my greatest sources of refuge — and not in a relapse sort of way.

See, I always treated food as a source of comfort and escape during the height of my eating disorder, bingeing almost every night.

Because of this, I never thought I could cultivate a healthy relationship with food — especially not with food that made me feel good and didn’t cause me to spiral into a mess of triggers, guilt, and self-loathing. I couldn’t remember what food was like before my eating disorder.

However, I started watching The Food Network and learning cooking techniques through the chefs and contestants on shows like Chopped, Hell’s Kitchen, and Master Chef. I thought cooking looked fun and creative; and for the first time in my life, I felt curious about food preparation.

As I began to face my struggles with food, I also started to embrace making food.

I discovered that not only did I enjoy cooking, I was actually good at it. It came naturally to me. Cooking calmed my anxiety and made me feel connected to the food I was eating and the greater nature of the food, especially in connection to the Earth, environment, and culture.

At the same time, I found myself eating a lot healthier than I ever had before. I also started to get more in touch with my own tastes and flavor preferences, which isn’t something I could ever remember experimenting with very much.

This then led to my cultivation of intuitive eating, or listening to my body about the food it wants to eat, rather than getting lost in the trap of my mind or society.

What did my body, my animal need right now? What did I have a taste for and what would bring me the most energy and sustenance?

As I started to listen to rather than talk at myself about food, I saw my intuition develop and my mindfulness around fun heighten.

Suddenly, food was no longer something that was consuming my every thought, or something I was planning my days around. Instead, it was a whole body experience that involved my mental, physical, and spiritual state.

Part of self-love is being able to recognize when your own behavior is a detriment to your wellbeing, even if it feels good. Intuitive eating and cooking grounded me in such a way where I saw my disordered eating as something outside of myself that was causing destruction.

It was the result of years of pent-up shame, anxiety, and depression. Instead of letting it out, I was holding it in and using food as my medicine.

The connections I was making between food, self-love, and intuition had me excited to experience living in my body and having the chance to cultivate respect with the food I was eating.

Instead of food feeling either like a complete indulgence or a total clinical buzzkill (as it had when I’d gone to a nutritionist), it felt like a holistic practice.

I know many of you are probably rolling your eyes at the concept of intuitive eating, but hear me out!

Intuitive eating doesn't take health out of the equation, but rather puts your body at the forefront. Instead of counting calories, grams of fat, or eating what and when everyone else does, you ask your body what it wants and honor that desire.

Your body might sometimes want to eat a delicious, beautiful salad. Other times, it may want to have chocolate chip cookies. Or, it may ask you for chili peppers!

It’s all about going inward instead of looking outward for the information we need to know about food.

From this, instead of shedding the concept of health, you can embrace it more. Unless you’re underweight or running 20 miles a day, your body isn’t going to ask you for chocolate chip cookies every time you’re hungry. Your mind might be asking you for that, but not your body.

The difference lies in how you receive the message, as your mind creates thoughts and ideas based on neural connections.

Your body, however, will give you physical signs of hunger; and by quieting your mind, you can hear what it has to say.

What’s in it for you? What I’ve found to be best part about intuitive eating is how it sheds the judgment we’ve learned to have around food. There’s no longer guilt with wanting to have something sweet, fried, or that’s not vegan, gluten free, or kosher. Instead, it’s just information.

It’s choices you feel good about because they literally came from you. And isn’t that a beautiful way to live?