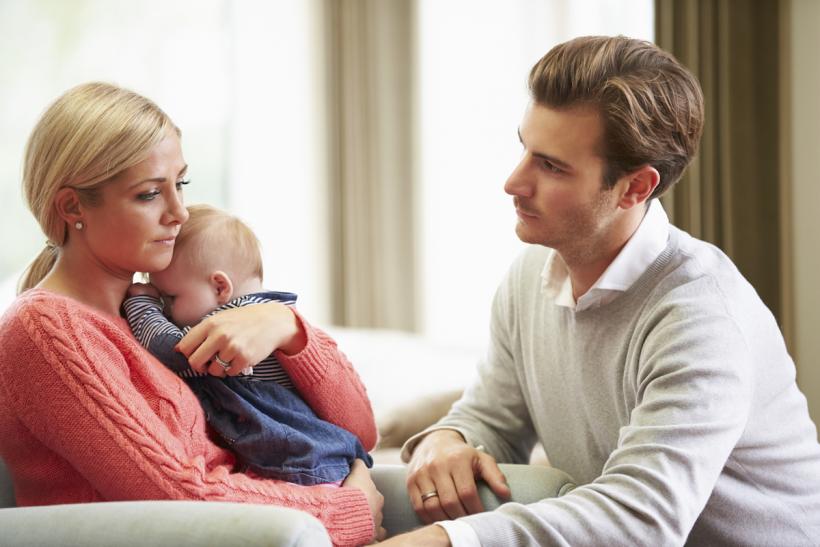 Before I met my wife, she struggled with an eating disorder for many years. Image: Thinkstock.

Sometimes, even with all the knowledge and help in the world, people who have given birth can’t help but crumble under the intense weight of society's expectations for their bodies.

If you’ve ever had a baby, thought about having a baby, or know what babies are, then you probably know that no matter how much you prepare, there’s always a whole lot of shit you don’t know going in the first time.

Luckily for you, when you actually have the baby, there are a lot of Trusted Professionals around to give you all kinds of tips and tricks for handling your newly-acquired infant.

Anyway, my wife and I just had our first baby, and we found that one of the ways that the hospital helps you out of the fog of child-rearing ignorance is by giving you a packet of goodies when you leave.

This packet contains a whole slew of brightly-colored pamphlets on exciting stuff like how to breastfeed, when and when not to call your doctor, warning signs for postpartum depression…

Oh, and an ad for a belly wrap to shrink your postpartum stomach.

I’m going to allow that to sink in while I jump back a few steps, so you can get to know a few things about me and my wife.

Before I met my wife, she struggled with an eating disorder for many years. It got so bad that, at one point, she was down to around 80 pounds. By the time I’d met her, she’d overcome the disorder and had been living healthily for some time.

Luckily, things with our son were going well, but my wife soon came to realize that her belly wasn’t a pregnant belly anymore.

But she's explained to me that, as with any disorder, she has to always be aware of it, so as to not slip back into old habits, which could lead to a relapse. She knows that this is not something that, once you beat it, is gone. These things stay with you forever — you just get better at dealing with them.

Though I can't claim to fully grasp her exact experience, this is is a principle I understand very well, being schizophrenic myself. Oddly enough, it’s one of the things that makes us work so well together, but that’s a story for another time.

When my wife got pregnant, we were both ecstatic. We’d bought a house a year earlier; things really seemed to be coming together for us.

But in the back of my mind, I wondered how she would handle the weight gain associated with pregnancy.

My wife had made it clear that working out regularly and eating well were important for her to maintain a good relationship with her body. These things allowed her to feel more positive about her body instead of fixating on the flaws she perceived.

This came to be the defining factor when she was pregnant. She was proud of her pregnant belly and the fact that our son was growing inside her. She still worked out, though not as much or as intensely, and we continued to eat well.

Despite terrible heartburn and the laundry list of complaints most pregnant people have, my wife loved it. She was always a firm believer in the idea that a situation is only as good or as bad as you make it, and she lived that to the fullest the whole time.

Then came the baby.

Watching my son's birth was beautiful, terrifying, and — at times — uncomfortable. No amount of reading can really prepare you for it and, believe me, I read everything.

But in the end, being with my wife every step of the way made me feel closer to her than ever. I’d never been so overwhelmed with love in my whole life as when I was holding my son for the first time.

We spent a few extra days in the hospital because our son had a bit of jaundice, but after that we were sent on our way, content to begin our new life as parents.

As any parent will tell you, things are never easy in the beginning. Luckily, things with our son were going well, but my wife soon came to realize that her belly wasn’t a pregnant belly anymore.

It was just a belly now. There was no longer a baby in there.

What was worse, it was going to take time for her body to heal — and that meant no exercising.

This was terribly difficult for my wife to grapple with, and she regularly confided in me that she was struggling. We’d talk about it and I'd reassure her that she was doing well.

I’ve always loved my wife’s body. When she and I met, she was sexy, her beauty only surpassed by the loveliness of her personality. I adored her pregnant body; in no way did it detract from how sexy she was to me. In fact, her friends were scandalously surprised at how often we had sex during her pregnancy.

The fact that we promote the constant need for unrealistic physical perfection mere weeks — even days! — after birth is saddening….

And now that the pregnancy is over and her body isn’t as it used to be, I find myself still overwhelmingly in love with every inch of her. I tell her so every day, because when she’s having a hard time seeing past the negative parts in the mirror, it can be helpful to be reminded that the person you love and trust the most can honestly say he always sees the most beautiful person he’s ever known.

But it’s at this point that we went through the packet given to us by the hospital and my wife stumbled upon the ad for a postpartum belly wrap that would “shrink inches fast.”

Neither my wife nor I (not that it's really my place) take issue with products that are meant to squeeze, tone, tighten, or accentuate someone’s body. If it makes you feel confident and sexy, and you’re doing it for you, go for it.

It’s your body; as long as you’re not hurting yourself, you should absolutely do what makes you happy.

But the period after having a baby can be such a fragile time. Your hormones are fucking everywhere. You have a beautiful but overwhelming new addition to your life, so you’re most likely terribly sleep-deprived. You’re double-fisting coffee like it’s going out of style, most days you’re wearing the same PJs that have been spit up on at least twice, and half the time, you’re unaware that one of your boobs is still hanging out.

It must be hard to feel attractive at all during this time — which makes it even worse that Trusted Professionals are perpetuating the problematic message that post-pregnancy stomachs are unattractive and something to get rid of as quickly as possible.

That's gotta be worse than a kick in the crotch (pardon the expression, but as a cis man, it's the worst that I can personally imagine).

Because of her history of disordered eating, my wife was horrified. We were endlessly disappointed that our hospital would contribute to the already-steep uphill battle that many women face every day to feel good about their bodies.

I was even made aware of the ever-popular hashtag #snapback, in which people post pictures of how they've “snapped” their bodies “back” to “normal” extremely quickly after giving birth. Every day you see pictures on the Internet of another celebrity who, days after birth, is having a photo shoot to show off her super-slim midsection.

These expectations and results can be unrealistic and even unhealthy, since having a baby is a serious physical and emotional trauma that the body must be allowed to heal from.

By bombarding pregnant people with messages like this, society keeps them from understanding their true strength and beauty.

The fact that we promote the constant need for unrealistic physical perfection mere weeks — even days! — after birth is saddening enough. When it's encouraged by someone whose advice and knowledge we believe are trustworthy, it's just that much worse.

...Things will be different [postpartum] — but that doesn’t mean you should ever feel bad about [your body].

My wife is lucky to have a good support structure and to have had the chance to do a lot of reflection and personal work around these issues, but at times, she still has overwhelming anxiety about how unfit and unattractive she feels. She even caught herself on a Spanx website at one point. For her, was a dangerous sign: Her goal is to appreciate and love her body as it is, without such enhancements.

Sometimes, even with all the knowledge and help in the world, people who have given birth can’t help but crumble under the intense weight of society's expectations for their bodies.

Yes, it is important to be “healthy.” Eating a healthy diet and getting regular exercise vastly improves a person’s happiness and ability to deal with stress. But for most of us, eating a strict, restrictive diet and working out for hours each day is next to impossible, both in terms of finances and logistics. With kids, work, and a healthy social life, there's just no time for any of that. And that’s OK.

In the end, being told you're unattractive and less than perfect is devastating, especially at one of the most stressful and draining and beautiful times of your life. Pregnancy and birth puts your body through a great deal of changes, so it’s understandable that things will be different afterward — but that doesn’t mean you should ever feel bad about it.

Take care of your body and your mind. They are both unique and beautiful.

Anybody who says differently is either an asshole or trying to sell you something.

Am I Only Successful Because Of My Schizophrenia?
Kevin Nordstrom