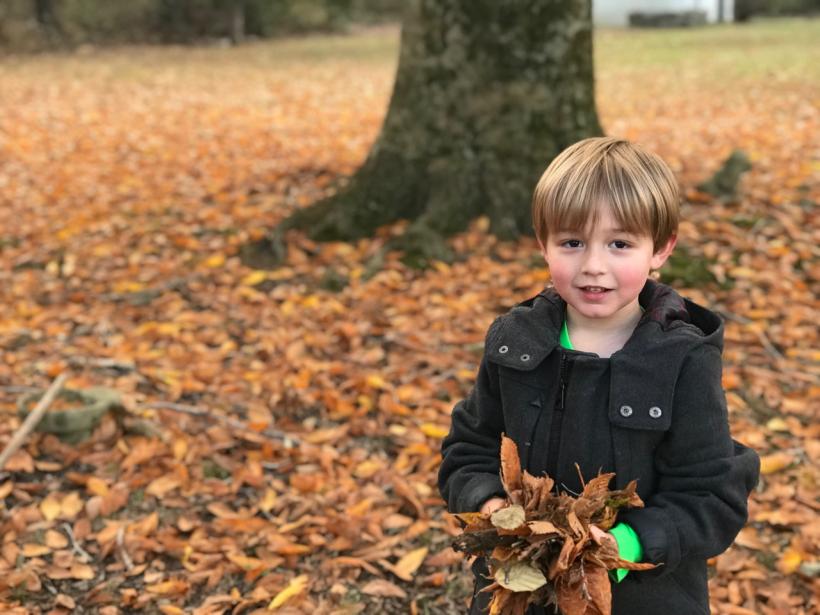 photo courtesy of the author

I’ll be receiving “The Worst Parent at the Park Award,” again. I’d start prepping my acceptance speech, but guiding my sobbing son to our car is stealing focus. When our boy was a toddler his emotional outbursts only received quick glances. Now that my five-year-old has officially entered boyhood, his crying looks awkward on him; he gets full-on stares. Working on a killer acceptance speech is definitely a good idea. I know this won’t be the last time we’ll find ourselves the subject of the gawkers, because me telling my son to “man up” will never be an option.

“Mom, I’m going to miss her,” my son whispered in my ear.

That’s when I knew saying goodbye to his park playmate would be difficult. When it came time for us to leave, my five-year-old’s very real feelings of heartbreak overtook him. He threw his head back in anguish and began to wail. To the rubberneckers playing at our playground, it looked as though the kid was having a tantrum his mother couldn’t control, but controlling my son’s feelings is that last thing I want to do.

What the onlookers don’t see is that safely in the car, my son and I will discuss what’s happening. I’ll help him breathe though the feelings that are making it impossible for him to talk. I’ll go on to validate all he’s experiencing, repeating sentences like, “I see you’re feeling sad…” When he’s calm enough, I’ll ask him simple questions to help him understand what he’s going through. Finally, he’ll pour out his heart along with his tears and reveal the true reason for his angst. He and I will work our way through his feelings together — something I never thought I’d be doing as the mama of a little boy.

When the doctor told me I was having a baby boy, the shock of my entire life being surrounded by rowdy testosterone almost made roll off the examining table. I was totally unprepared to be the mother of a male child. The only man I’d ever tried to raise was my husband, and even though I knew my hubby fairly well, I knew nothing about little boys. Not ever having been around boy-babies much, I immediately started to recall what I’d gleaned from the occasional mom-friend lunch or "The Goonies" — admittedly, not a lot to go on.

I figured little boys were manly little men who didn’t cry much and loved blue talking toy trucks that told fart jokes. Concerns about being thrust into a “boy” world where I couldn’t identify kept me up at night. Even though blue was my favorite color, I’d never told a fart joke in my life. How could raise a little man? Then I met my son, and he showed me how wrong my assumptions had been.

“Mom, you’re the only friend I love too much!”

I quickly learned that boys can love hard.

They can also love the color pink — and blue, and yellow, and any color they want. They can play with dolls and trucks whenever the mood strikes. My son giggles and cries with the best of them. He has shown me that kids aren’t prone to stereotypes. Adults are more apt to brand and label — like I’d done before he was born. Since learning how to mother my son, I’ve come to understand that being his mom means putting away those labels. Stereotyping my kid because of his gender will never work to raise a healthy, emotionally aware person.

My son’s feelings are his own, and I’m committed to helping him feel his way through them. I’m working against popular phrases like “Big Boys Don’t Cry” and “Take It Like a Man.” These expressions do my sensitive boy such a disservice, because they define him before he’s even defined himself. At his age, my kid is trying on an emotion like trying on a big coat, and I don’t want to put him in a straight jacket. I want to support what he chooses. My boy dances at the end of happy movies and misses loved ones with a fierceness that makes him weep. I’d rather try my best to give him tools to understand all his feelings, so he can begin to understand himself, than constrict who he is by imposing societal “norms” like, “Man up.”

Because he’s a boy filled with big emotions, I constantly worry that outside of his safe circle he won’t be accepted. My heart grows heavy when I think about who he’d be if he chose to bury the beauty of his sensitive side. What happens in his Kindergarten class if he decides he needs a good cry? Fear creeps in, and I hear him being teased with the classic, “Big boys don’t cry...” Will his need to fit in become greater than his need to feel all his feels? What happens to that big heart of his then?

Of course, I want my son to feel the comfort of acceptance in a world that can be quick to judge, but more importantly, I hope he can learn how to embrace and accept himself. So, we will continue to chat about feelings whenever they come up. I’m hoping with all the talking we do about feelings, that it will give my guy the confidence he needs to keep on feeling. Maybe it will help him understand that those highs and lows are as much a part of him as his eyes or his elbows. Emotions are the colors of our lives, and I’m so very happy to try teach my little man how to paint with his.

How To Talk To Boys About Talking About Girls

8 Things You Must Never Do When Raising Boys

Mommamental: Talking About Sex With Our Sons

If you like this article, please share it! Your clicks keep us alive!
Tags
Boys
raising boys
parenting
motherhood
emotions
gaslighting