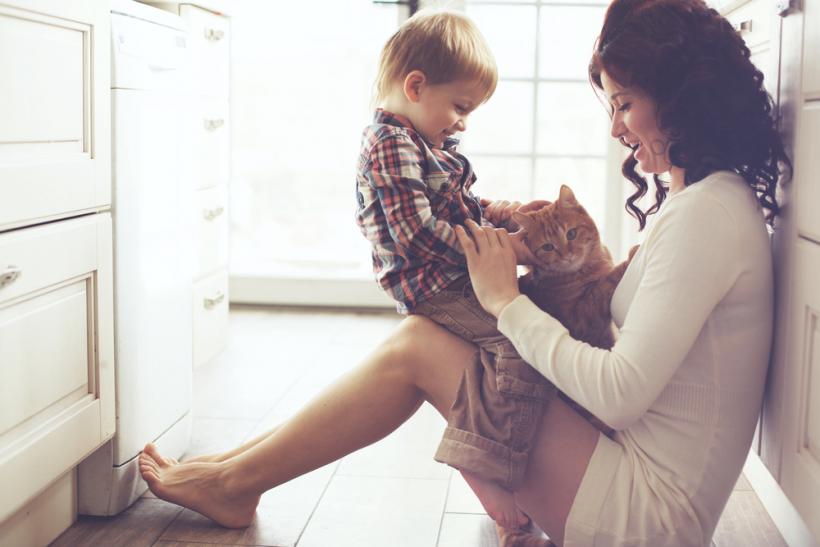 I’m an empath raising an empath. Empaths are people who can absorb or intuit other people’s emotions.

“How are you feeling?” I ask, even though I already know.

My four-year-old is not using any of his obvious tells. His face is blank. For the average onlooker, he’d be winning this poker hand. For me, though the giveaways help, I don’t need them. I know how he feels because I can feel it in my body — more specifically, in my belly.

He’s upset. I’m waiting for him to realize his big emotion so he can tell me what’s going on. Finally, it’s clicked. My arms are now full with my crying son.

My gut never lets me down. I’m an empath. I also happen to be raising one.

If I mention I’m an empath, I get looks like I’m some alien that’s been accidentally left here by The Mother Ship. Empaths are people who can absorb or intuit other people’s emotions. I understand it feels confusing that a human person can tell another person how they’re secretly feeling. I know it feels confusing because I can feel that person’s confusion. Confusing, right?

I’m the type of empath who, when nearby, can both absorb and intuit someone else’s feelings. Most times, I’d rather hold onto my own emotions and let everyone else deal with theirs, but my empathic nature has an openness. I am the 7/11 of empaths.

It has taken me decades to understand how my more intuitive nature works and even longer to feel that being empathic is a personality trait I want to celebrate. Now, it’s an attribute that helps me in many ways. I can intuit when people are saying one thing yet hiding another. I can feel hidden anger acutely, so I stay away.

Being an empath has led me to approach parenting innovatively. Because emotions are my bag, I discuss them with my son as easily as we discuss colors of crayons. Along with the classic “Mama,” “Dada,” and “Chewbacca Poop,” some of his first phrases were about how he felt. He amazed friends and family alike with deep insight into his emotional awareness. I believe this ability helped him avoid many a tantrum and melt-down because he was able to tell us how he felt before the emotions become too big to recognize.

Of course, there are times when his emotions take over. My kid is a good, long crier. He likes to “get the sad out.” I’m not going to rush him, so this is when I just hold him. This is also when I start wondering if that apple didn’t fall far from The Mother Ship. Empaths feel a lot (sometimes to an extreme). When my son steps into these big feelings, he can live there. He has built a house, planted flowers, and ordered pizza.

We work a lot on deep breathing or stomping our feet through the big feelings. Sometimes we take a long walk or find a quiet corner to wait it out. These are all versions of tools I learned in overwhelming times. They have helped me through the rough days of parenting or long days of running errands. I know all too well that feeling all the feels is exhausting without the right self-support. So, we practice feeling our feelings, and then like Elsa, we try to "let it go."

When my son went to pre-school, he discovered was a whole new world of feelings to explore. There were a lot of days that an event would trigger my son’s sensitive heart. His teachers were at first surprised at his ability to effectively communicate why he was sad but then dumbfounded at his seeming inability to move on quickly. They tried to move him through his feelings faster, but my kid had built his house. He was prepared to weather his emotional storm. He stayed true to himself while experiencing overwhelming feelings and adults that wanted to rush him through his process.

I was proud that he stayed comfortable in his sadness.

When my kid tells me his emotional stories, my heart overflows due in part to my heart assimilating all he feels but also because I’m astonished at the strength of his four-year-old heart. Growing up, I wasn’t able to remain true to my nature. There were many nights I wanted The Mother Ship to take me home because feeling everyone’s feels were too much. To cope, I ignored my gut, which in turn meant ignoring myself. It took some major heartbreak to set me straight. I realized I couldn’t ignore my emotions (or other people’s), so finally, I learned how to take care of me.

Parenting my sensitive son and passing this knowledge down to him are my greatest delights. With any luck, my heartache can save some of his. I’ve never felt a greater sense of joy than lovingly helping him through an emotional tight spot. Feeling these feelings feels pretty good.

If you like this article, please share it! Your clicks keep us alive!
Tags
empath
mother
mothering
parenting
son