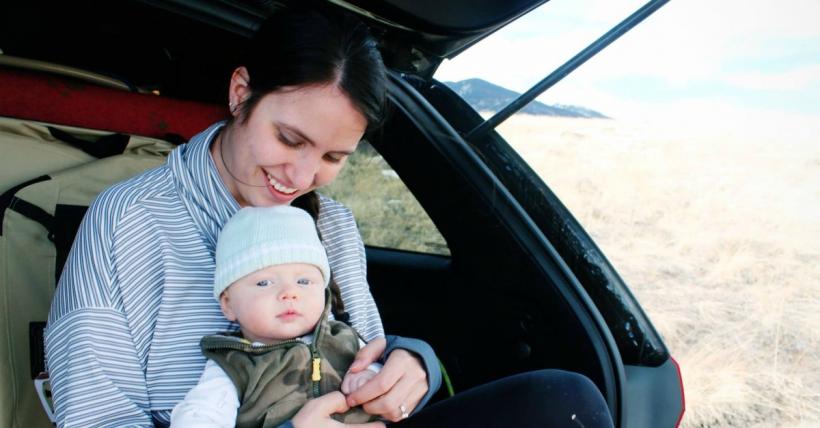 I will make it my mission to teach him that the traits which make us unique are so much more worth celebrating than the ones that fit a mold. Image: Emily Glover.

Let’s not forget: Almost every time a girl is encouraged to slim down, a boy is told to bulk up.

When the ultrasound technician announced it was a boy, relief immediately washed over me. It’s not that I didn’t want a girl; it’s just that I know all too well how much pressure our daughters are under to look a certain way — and I wasn’t entirely confident in my abilities to help that potential girl navigate through life with the kind of body confidence I once lacked.

I wasn’t always that way, though.

Growing up, I started out with better-than-average levels of self-esteem. At least when it came to my body. Although it wasn’t often a topic of discussion in our home, my parents set good examples by working out for the enjoyment of it and never talking about food in moralistic terms. Sure, I had fleeting wishes to look a bit more like this model or that actress, but I wasn’t fixated on my body. As far as I was concerned, it was just something that helped me do well in sports.

But then college hit — and suddenly, that teenage metabolism of mine seemed unable to compensate for all those nightly buffets at the dining hall and relative inactivity. At first, I chose to ignore those first freshman pounds, but one of the guys living on my dorm floor sure didn’t: His passing use of the term “fat ass” whenever I was around awakened something in me. I was suddenly painfully self-conscious about my body and how it compared to others, and combined with the anxiety and depression I was already tackling, it was a recipe for disaster.

So began a downward spiral that ended with an eating disorder diagnosis that would take me years to bounce back from.

A very real part of me was nervous about the responsibility of teaching a daughter how to cope with the pressures put upon her — from the media, from other people, and perhaps most of all, from herself.

Even though I am no longer as tormented by thoughts of food restriction and deprivation today, that little voice of doubt still speaks up on occasion — giving me continued insight into how girls in particular can be so easily plagued by body image issues. When I learned I was expecting, a very real part of me was nervous about the responsibility of teaching a daughter how to cope with the pressures put upon her — from the media, from other people, and perhaps most of all, from herself.

But as the news set in that I was having a boy, I quickly realized I wasn’t given a free pass in this department just because of my child’s gender. While stats confirm that the number of women diagnosed with eating disorders and body image issues far outpaces the number of men with similar struggles, our sons are challenged in different ways.

Let’s not forget: Almost every time a girl is encouraged to slim down, a boy is told to bulk up. For all the diet products directed at women, there are just as many muscle-boosting supplements for men. And what is the term “tall, dark, and handsome,” if not an impossible standard for many?

My goal isn’t just to raise a son who can avoid the trappings of eating disorders. It’s to help him actively embrace who he is, on all levels.

And this isn’t just anecdotal. Researchers have clearly observed a rise in eating disorders among men, including muscle dysmorphia — a condition that has been called “reverse anorexia.” And it can wreak just as much havoc as any of the better-known eating disorders.

There is, of course, a wide spectrum between body negativity and body positivity. My goal isn’t just to raise a son who can avoid the trappings of eating disorders. It’s to help him actively embrace who he is, on all levels. I also know that my son’s confidence will benefit others in his life, because positive self-talk breeds positive self-talk.

My wish is that he won’t resort to physical insults when bickering with his future siblings. I hope he is the one to steer conversations away from diet or weight talk with his friends. And I dream he will always make his partner feel beautiful.

That’s not to say that raising a body-positive son will be easy, or even as simple as eliminating disparaging words from our vocabularies or emphasizing function over figures. In fact, I believe it’s just as important to help him know that body insecurities do exist, so he can practice sensitivity and awareness around others.

Maybe by doing so, he will never have thoughts or say words like that guy I knew in college.

Of course, I won’t be able to shield my son from all the negative voices that will play in his head; the ones that will tell him life is better when you look a certain way. But I will make it my mission to teach him that the traits which make us unique are so much more worth celebrating than the ones that fit a mold.

I don’t expect it will always be an easy process — because, well, what part of parenting really is? But committing myself to practicing what I preach will at least be the start of a positive cycle. One that will benefit an untold number of people to come.

"It's Still My Job to Teach My Child About Body Positivity, Even If He's a Boy" by Emily Glover originally appeared on Babble.com.

If you like this article, please share it! Your clicks keep us alive!
Tags
parenting
son
body positivity
Eating Disorders
body ideals