Body Positivity: Are We Fighting For Equality, Or Just Equal Beauty? 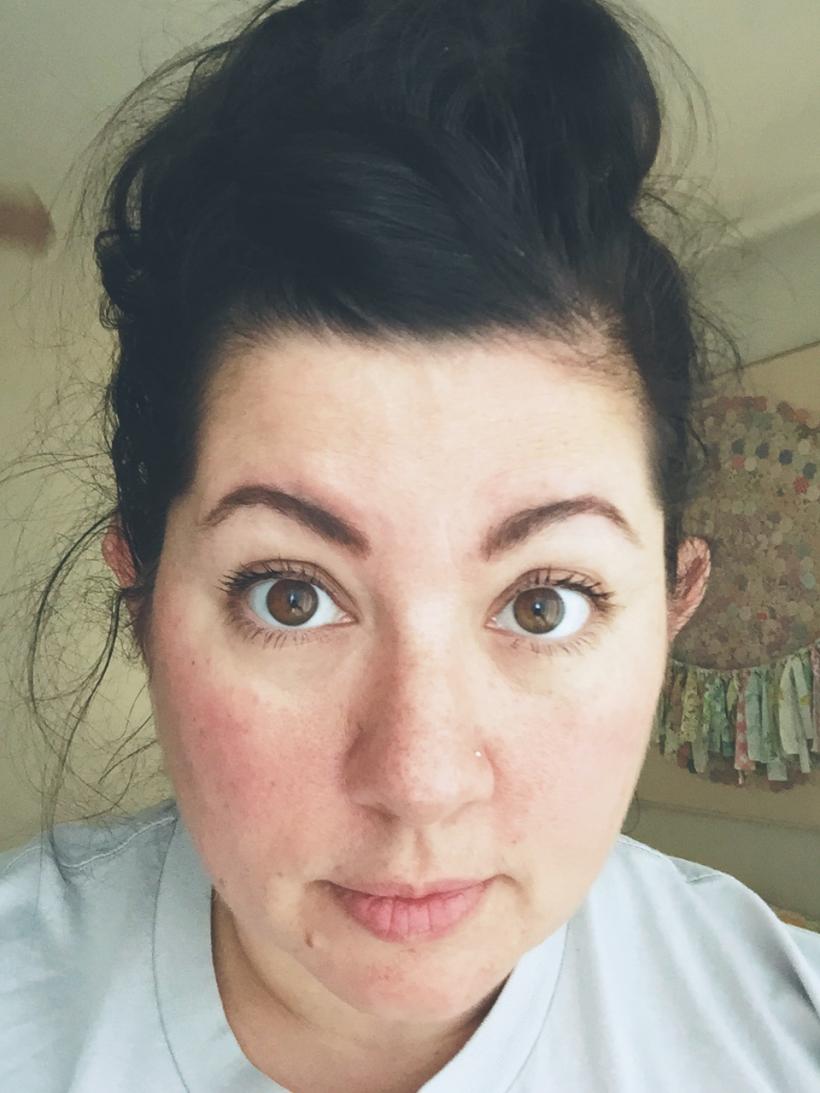 I don’t want to fight to be seen as beautiful. I want to fight for beauty to come last on the list of things that I am. Image: Joni Edelman.

Sean turned 18 today. I made a gorgeous chocolate cake. My father came to celebrate with us.

My oldest son being 18 is incredible, but isn't really relevant to this story — except to say I’m old enough to have two adult children. And that's weird.

My period has been gone for four months. I wonder if this is due to age, impending menopause, stress, hormone imbalance, or if it's something else (Not pregnancy, anything but pregnancy. Amen.).

My face has a network of tiny red capillaries, the kind you’d expect on the nose of your drunk Irish grandfather (I’m German, so I’m just generalizing here). The furrow in my brow, the one that used to be visible only when I squinted, is now a permanent fixture in the center of my rapidly-wrinkling forehead.

I have eternal Resting Bitch Face.

I wonder if [my grandmother] would have used the adjective “hourglass” to describe her figure, or if she even knew the term.

I’ve settled into whatever body I’m going to have. It’s been this way long enough for me to know it’s probably not going to change remarkably — except for more gray pubes, more furrow lines.

When my dad was here eating cake, he told me my body looked like his mother’s.

Which is to imply that the genetic gods have endowed me with breasts that pop out of the top of a demi-cup bra, an ass like a shelf, a perpetually-pregnant belly — the product of producing six humans (one of whom just turned 18) — and a few chocolate cakes (in addition to the one we ate tonight).

My father isn’t cruel; he's just honest. I do look like his mother. 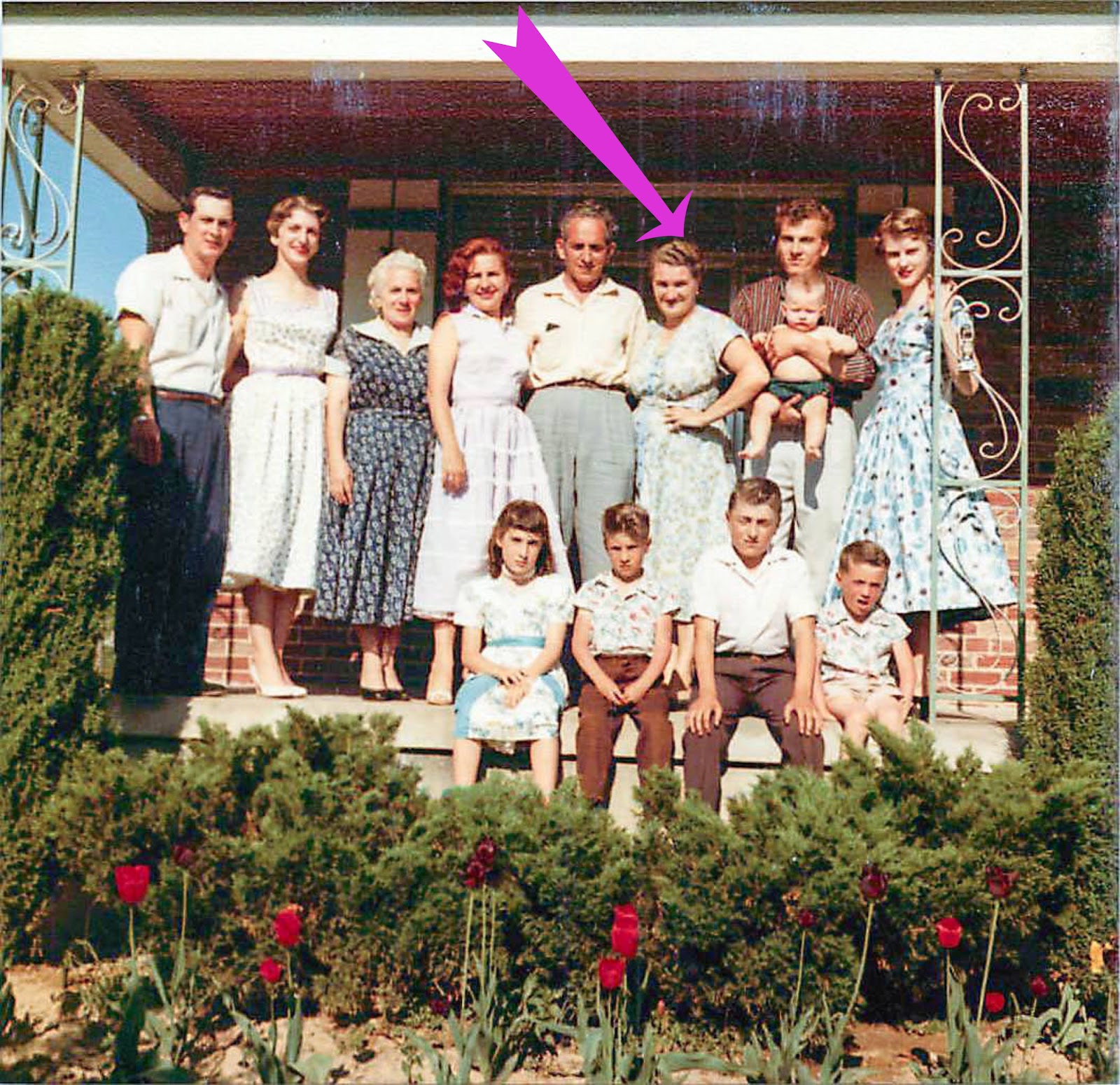 That’s her, with the push waves I could never even hope to duplicate.

My dad is the little dude on the far bottom right, the youngest of seven children. That explains her belly.

I imagine she couldn’t see her pubic hair either.

I wonder if she cared.

There was no body positive movement in the 50s, at least not one that would have been on her radar in the suburbs of Cincinnati.

You were either fat or not — my grandmother was too busy learning English, keeping the house clean, and feeding her seven kids homemade dumplings to care about how she fit into that binary.

I don’t know how many shirt-dresses she had like the one in this picture. I wonder if it occurred to her that a fitted waist flatters an hourglass figure, or if it was just a practical choice to have a dress that had pockets.

I wonder if she would have used the adjective “hourglass” to describe her figure, or if she even knew the term.

I didn’t know what it meant to be “body positive” until 2011, at least not in the hashtag sense. Instagram, Jes Baker, Whitney Way Thore, Virgie Tovar, Ragen, Tess Holliday, Adiba Nelson, and so many others put the word and movement in my face. I began to analyze my relationship with my own body, and I was inspired to begin writing and speaking out about body positivity.

My life before then was just series of weight-loss successes and failures — the same 60 pounds lost and gained several times.

For me, body positivity meant that, after battling profound self-loathing and an eating disorder I refused to accept that I had, I could weigh 200 pounds and not loathe myself.

My body was suddenly no longer a source of shame and sadness.

I started writing about my body. My inbox filled with the hate of a thousand misogynistic men — and at least a few dozen women who seemed less angry with my writing itself, more angry that they were fighting to attain a size that was supposed to make them happy, but didn't. I'm grateful to the women who came before me — Jes, Virgie, Whitney, all of them — and have endured this same abuse; through them I learned how to stand here, in this space. Here, where the hatred is just evidence of a construct challenged.

But I’m also in the space where the connotation of the term “body positivity” has shifted.

In the last five years, I’ve been swathed in the movement, and I've preached its tenets.

The more I think about this, the more I wonder what we're really fighting for.

The idea of beauty, the feeling of it, the need for it, has driven us — the fat women, the wrinkled women, the women with the southern-swaying breasts, the women who can’t shop in the front of the store — to fight, to share the stage with conventionally-beautiful thin women.

Being seen is at the center of the fight; I want to be seen, too. But now that I’ve settled into my fat body, now that I don’t waste my insomnia on worrying about my husband leaving me for a skinny blonde (as I’ve been warned), now that getting dressed isn’t an existential crisis, now that I shop online and just avoid the back-of-the-store relegation, beauty has lost its magic.

Being “ugly” won’t break me. Being “beautiful” won’t fix me.

Most of us know on an intellectual level that there is more to a human than meets the eye, and that beauty is constructed, subjective, fleeting. Yet we still fight to claim the adjective for ourselves. We squeeze our way onto Instagram feeds, to the square right under thin beauty. We makeup ourselves into the magazines. We bare our bodies, to feel valid, to be seen.

But in our fight to be seen, we’ve lost sight of the real fight: Why do we need to be seen at all?

Why is it so important to be beautiful?

The world has made us believe it; it’s made us fight for it. We have created the beast that pits thin against fat, white against color, old against young — the beast that vies for the eye of a passing stranger, the turn of a head. That’s not the fight I’m in today. I’ve fought to feel fine, and I do.

Now I’m in the fight for beauty to be declared irrelevant.

I'm in the fight for feminism that means equality. The end.

I don’t want my children to hear “beauty comes in every size.” I want them to hear that “beautiful is the least of all the things you can be in this life.”