My Kid's Project Sucked And I'm OK With That 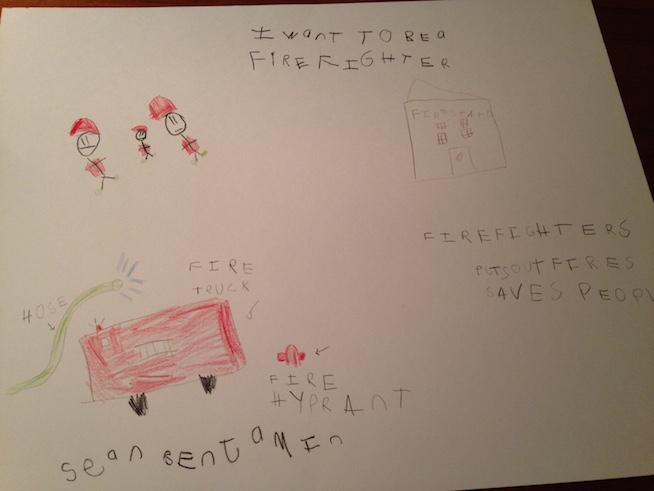 Sure, in kindergarten, it's expected we'll help our kids more than we do when they're older, but I'm setting the precedent now. I'll assist. I'll guide. I'll offer advice. But they're doing the work.

OK, for the record, he's in kindergarten and for his age, it did not suck. It was a masterpiece of little-boy seriousness and hard work, actually. (Of course, I might be biased.)

I've learned hard lessons with my oldest — he's 10, in 5th grade, and knows everything (according to him). Doing his homework for him has never been an option, but riding his butt while he procrastinates and not letting him up from the table until the finished work is perfect or we're both in tears — whichever comes first — isn't an option anymore.

Living out my glory days of straight A's in school through him is not going to help him learn anything. It took many nights of fighting about spelling words and realizing common core math has turned me stupid to get to this point.

When the baby (now in kindergarten) had his first project making a poster showing what he 'wanted to be when he grows up,' I knew he needed guidance, but I wasn't doing the bulk of the work. However, that didn't stop my imagination from going wild.

We could drive to all the fire stations in the area, take pictures, print them out, cut them neatly around the edges, paste them in straight lines, and he could write a few words. It would be beautiful and perfect.

Or I could get a grip and realize that was a shit-ton of work for me and not so much for him. No thank you.

On a Sunday afternoon before the project was due, we sat down together to figure this all out and how we were going to take a wide expanse of blank poster and turn it into “I want to be a firefighter.”

“I want to draw pictures, Mommy.”

I may or may not have muttered a “Thank God!” under my breath.

Crayons and colored pencils at the ready, I sat at the table and helped him think through the different elements. I gave him ideas when he seemed stumped. I showed him how to draw things on scratch paper — except for the fire hose that looks mysteriously like a penis (the one thing I drew for him. Oops!). I spelled all the words he didn't know. I helped him section his poster so the work would be relatively neat.

Ta-da! That was it. In 30 minutes, he was done. He did the work and it showed. We were both proud of it. OK, I was proud of him, and he was proud of the work.

A few days after the posters were presented and kids in his class talked about firefighters, police officers, astronauts, and paleontologists, I was in his classroom and saw some of the other projects.

Wow, those parents worked really hard. For half a second, I felt sorry for my youngest, that I didn't do more to give him a great looking poster.

And then, “Aw hell no!” What he turned in was his work, not mine. He decided how to put it together, what he wanted to present and the information to share. Him. Not me.

So yeah, next to the other kids' projects, his sucked. But when he's in 5th grade and has some weird diorama that he forgot or a science experiment that mysteriously slipped his mind, he won't be under the false impression that his mother will be the one finishing it for him at midnight.

Sure, in kindergarten, it's expected we'll help our kids more than we do when they're older, but I'm setting the precedent now. I'll assist. I'll guide. I'll offer advice. But they're doing the work. They don't go to work for me and turn in my assignments. Why in the hell would I do the same for them? What exactly are they going to learn from me doing their work for them? Not a damn thing.

My baby rocked his age-appropriate, mostly independent project, and his teacher thanked him for his hard work. That's the lesson he needed to learn from it — not the one that says ‘Mom will do it for you if you get stuck.’

If you like this article, please share it! Your clicks keep us alive!
Tags
parenting
school projects
kindergartners
parenting humor