It's OK To Be A Liability: Mental Illness And The Fear Of Being "Too Much" 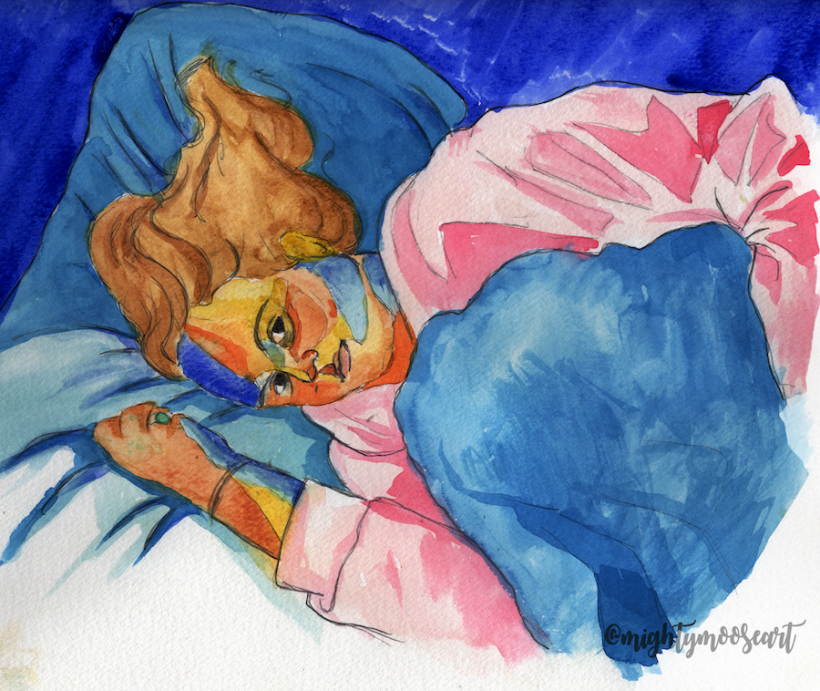 My sister plants herself on the couch next to me and grabs my laptop to pull up Spotify.

“You need to listen to it. Now,” she commands, pulling up Lorde’s new single and hitting play. The song is called “Liability,” and at first, it’s difficult to hear much of anything. A man murmurs a count-off, and someone slides their fingers across the frets of a guitar.

Then the music begins, a low and haunting piano melody that plays its way straight down my spine. Lorde starts to sing-talk in that Johnny Cash way I love so much. My sister leans back, satisfied to finally be showing me a song for the first time. The lyrics seem to blink right at me, and I feel so seen that it’s almost painful. I don’t cry until the chorus:

They say, "You're a little much for me

You're a little much for me"

So they pull back, make other plans

I understand, I'm a liability

Get you wild, make you leave

I write the entire song from memory into my journal the next day.

In the world of Harry Potter, there’s a magical creature called a boggart. No one knows what a boggart really looks like because they take on the shape of their victims’ greatest fear — that’s kind of their whole schtick. I think a lot of kids like to wonder what their boggart would be, but I’ve always known mine. It’s the same today, at 20, as it was when I was a third grader reading Harry Potter and the Prisoner of Azkaban for the first time. My boggart is someone (a parent, a friend, a teacher, a lover — it doesn’t matter) I love standing in front of me, saying, “Go away. I don’t want you anymore.”

My biggest fear is being too much.

Too much crazy, too much to handle, too much to listen to, too much to love. I’m afraid that one day, people will realize how much work I am and decide that I’m not worth it. As a defense mechanism, I have a tendency to make that decision for them preemptively.

Growing up, I’d try to tone down the “chronic” part of my chronic mental illness to the best of my ability, and when I inevitably couldn’t manage that, I’d just isolate myself. I believed (and sometimes still do, because lifelong habits are hard to break) that if I held everyone far enough away, they’d like what they saw. I could take care of the rest on my own; I always had, and I figured I always would. Being alone is better than being left, I told myself. I knew what both of those things felt like, and while neither felt particularly awesome, being alone was much easier. Until it blew up in my face.

A little more than a year and a half ago, I found myself in the most vulnerable situation of my entire life, one so tender and raw that I still don’t feel comfortable sharing the details with the internet. I’m not sure I ever will.

In short: Someone told me they loved me and I freaked the fuck out. Like, really bad. Paralytic. I lost control of my body and shut down.

The thought of someone loving me was completely overshadowed by the fear of them leaving.

I didn’t want to wait for them to tell me to go away, so I did it myself in that exact moment. I left. I abandoned my brain, my body, and that other weird thing bouncing around in me that I’m pretty sure is a soul of some sort. I became a shell, one that said nothing but, “I’m sorry, I’m sorry, I’m sorry.” It was so bad that I missed a plane flight the next morning. “I couldn’t make my legs walk,” I remember choking into the phone as I explained the situation to my mother. I felt betrayed by my own brain. The thing that had kept me safe for so long had finally collapsed, and I was trapped underneath it.

I told myself that it wasn’t a big deal, but it was — it is. I broke my own heart, and all because I was scared of someone else beating me to it.I looked back at all the other times I’d kept people at arm’s length and told myself that they were “close enough.” None of it felt worth all the trouble anymore. I had spent so much time running from my boggart that I didn’t realize I was letting it ride along atop my shoulders. I was exhausted.

I haven’t been able to talk much about it since — I only recently started letting myself feel about it. I turned the whole thing off the moment I made it off that plane flight; the shame was absolutely unbearable. It was too painful to think about, too embarrassing — too much. Only now do I realize that only made things worse.

Slowly but surely, I’ve started to allow myself to think about what happened, to feel sad, to cry.

Maybe one day I’ll have enough courage to sit down with that person and tell him all of this, but for now, I’m grateful I can finally write it down at all.

It feels good to be vulnerable about being vulnerable, to listen to songs that make me think of what happened and not feel totally ripped apart. I’ve become more open to the idea of being a liability to someone other than myself. I ask friends for help. I talk to people I trust when I’m having a hard time. I try to say “I have a therapy appointment” instead of just “an appointment” when I’m making plans with people. I’m starting to wear my chronic mental illness openly, sometimes even proudly.

I don’t know what Lorde was thinking about when she sat down with Jack Antonoff and wrote “Liability.” I have no clue if she has a mental illness, if she’s experienced trauma, if she has ever felt like she was “too much” for anyone to love. All I know is that her song makes me less afraid to tell this story. It makes me ache for all the times I refused myself a connection with others. All the fences I have set up around my own storm so that no one need ever make the big mistake of dancing in it.

And then, of course, I realize all the people I have left in my fear of being left. All the people who probably also feel like a liability, who were asking me to be a liability with them. The people I made cry in taxis and dance alone in their living rooms — not because I regretted loving them, but because I never gave them a chance to love me.

Here’s the thing nobody tells you: absolutely everyone on this planet is “too much." It’s called being a person.

I don’t care how mentally ill you are, how many problems your life seems to have, how much drama people think you attract. Your muchness has no bearing on your worth as a person.

I can’t guarantee that no one will ever leave you — in fact, I guarantee the opposite. People will probably leave you, and it will hurt very bad. People break up, move away, get in fights, and fall out of love. People straight up die sometimes. That hurts really bad, too. But shutting yourself off and away from all of that hurts even more. Trust me — I tried to make it work, and all I ended up with was a $50 surcharge on a plane ticket and a self-imposed abandonment complex even bigger than the one I started out with.

Embrace being a liability, be it romantically or otherwise. It means there’s something at stake, that you matter to someone and they matter to you. Sometimes that connection is brief and bright and flickering, and sometimes it forges a chord of communion that lasts your whole life. The only way to know is to let people in.

If you like this article, please share it! Your clicks keep us alive!
Tags
#OCDame
mental health
mental illness
Lorde
Music
vulnerability