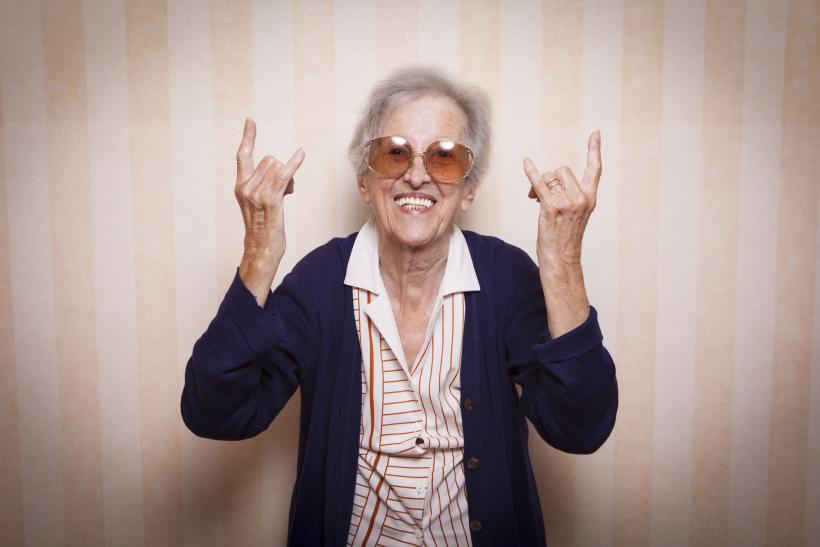 Laughter is some wondrous medicine.

News flash: things are super messed up in our country (and the world) right now, and sometimes that fact can become entirely too much to handle. Ever since the election results came in, it seems like the media has had one mission and one mission only — to scare the crap out of us with every horrifying possible outcome having a man like Donald J. Trump in the White House could yield. Granted, some of those alarmist predictions have since come true (along with many others we could never have imagined).

But the truth behind this nightmare situation only makes it harder and harder to live in everyday life.

As a result, I’ve attempted a variety of self-soothing methods outlined by a flurry of service articles to cope with these often overwhelming realities. Some (usually written by psychologists) suggest channeling one’s “Trump Anxiety” into a healthier outlet, like exercise or writing hundreds of letters to Congress members. Others suggest taking a serious break from one of the most relentless (and often sensational) news sources — social media. All are useful strategies, and I can personally attest to them working to some degree, especially social media embargos. However, for someone like me who makes their living by knowing what’s going on in the world, those embargos don’t last very long.

There is one thing I’ve found that does have a lasting positive effect on my anxiety and doesn’t involve shutting out the world completely: Comedy. That’s right, friends. Funny things have an uncanny ability to lift us out of our racing, worrying minds, and take a much needed guffaw of relief. Nine times out of ten it will do the trick.

I’m not talking about your average funny gif where a cat’s pushing a grocery cart down the cereal aisle and starts rapping with other grocery shopping cats. I’m talking about really funny shit that sucks you in and keeps you laughing and smiling long after it’s over.

Here’s a list of my 6 favorite funny things out there right now that are sure to quell your anxieties (at least for an hour or so).

1. Podcast: Hello from the Magic Tavern

Need a literal escape from reality? Welcome to Foon! A magical, medieval-like land where strange creatures abound and occasionally chat with Arni Niekamp, the resident podcaster. Arni appeared in Foon after falling through a time-space wormhole behind a Burger King in Chicago, and since then has simply been trying to navigate Foon and understand its residents. He’s usually joined by two co-hosts, Chunt (a shapeshifter who most often appears as a badger) and Usidore (a local wizard on a quest to defeat the Dark Lord). Every week, they interview a new, bizarre inhabitant of Foon. The show is voiced by some of Chicago’s funniest comedians, and is sure to make you feel like you’re not in America (or on this planet) anymore.

You know how things could be worse? If you were a flesh-eating zombie who also had to keep up a normal life as a realtor in Santa Clarita, California. That’s the premise of this new bloody and dark comedy on Netflix starring Drew Barrymore and Timothy Olyphant. It’s all the fun grossness of The Walking Dead, but none of the dystopian horror that might raise your blood pressure. Just your average, everyday mom trying to keep on top of work, her teenaged daughter, and this all-consuming need to feast on human flesh. Super fun, but probably not well-suited for little kids.

There’s nothing that helps me put things in perspective like watching a very pregnant comedian talk about putting her husband in his place when he asks her to wash the dishes (“I’m busy making an eyeball”). I won’t give too much away, but this hour-long special is worth watching several times over (which you can totally do, because it’s on Netflix). Check out the preview here.

Another hilarious female creation, Hulu Original Difficult People follows writer Julie Klausner and everyone’s favorite on-the-street man, Billy Eisner, as they live “creative” lives in New York City, and make fun of everyone in it. I don’t know about you, but there’s something cathartic about watching others hate on the things that bug you too. This show is all that and more plus other amazing comedian guest stars and cute-ass dogs.

This is the absolute perfect book to read if you’re feeling helpless, sad and beaten down by the pressures of a misogynistic world (hey, we’ve all been there, amirite?). It’s full of essays, witticisms, and poems that will make you laugh out loud, sure, but they’ll also empower you like: whoa.

Desperate to argue with someone in the face of this enraging political climate, but also desperately want to avoid politics? Superfight is your answer. It’s an arguing game in which two players pick a character card and an action card (for example, you could be Batman riding a war dolphin, or Mount Rushmore but you’re made out of kittens), then each person argues why they would win in a battle. Your arguments don’t have be logical (as any good politician knows), but they have to be compelling enough to sway the elected judge. It forces you to get active, think outside-the-box, and best of all, forget about the character currently residing in the White House.

If you like this article, please share it! Your clicks keep us alive!
Tags
coping
Trump
laughter
comedy
Ali Wong
Amy Poehler
Hello from the Magic Tavern
drew barrymore
The Santa Clarita Diet

Traditional Meditation Makes Me Crazy; Here's What I Do Instead
Ally Hirschlag

Is That My Biological Clock Ticking, Or Is It Just Peer Pressure?
Ally Hirschlag