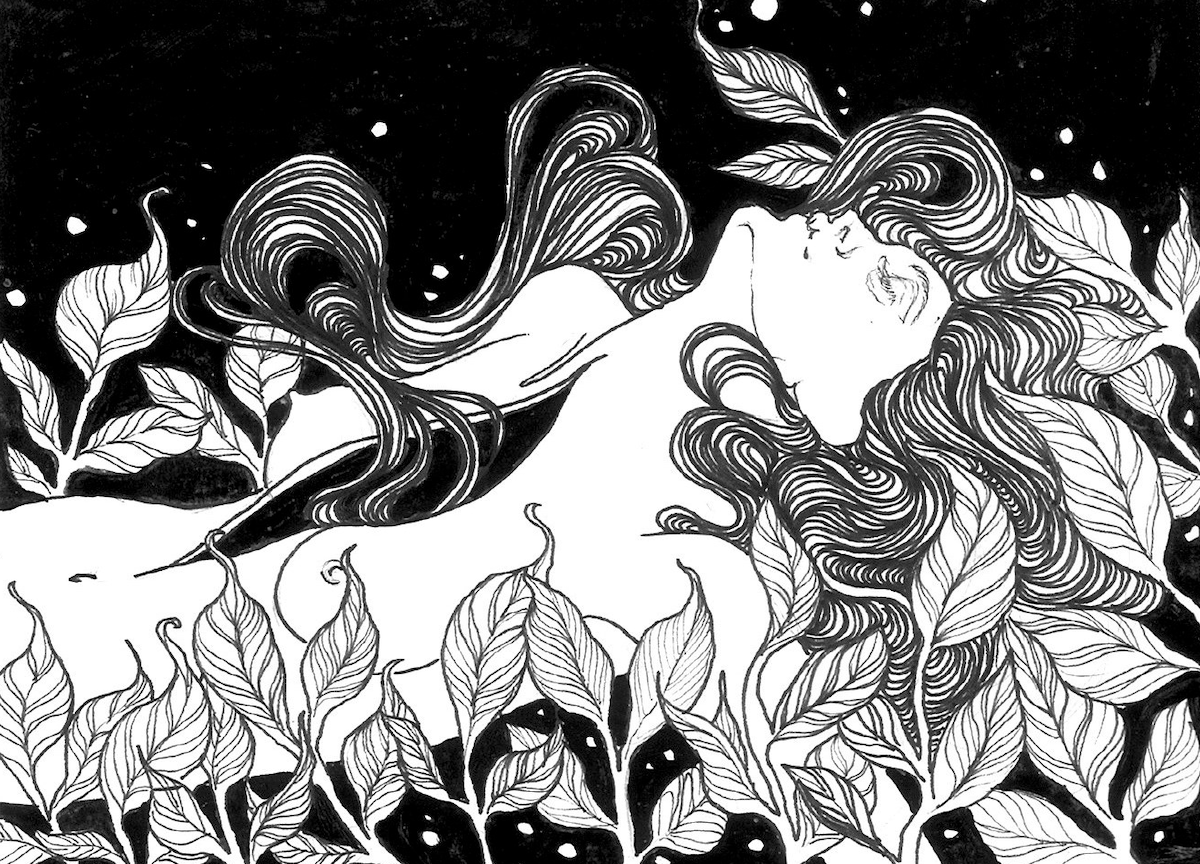 It was a pleasure chatting with Katharine Coldiron about her forthcoming book, Ceremonials, a twelve-part lyric novella inspired by Florence + the Machine’s 2011 album of the same name. It’s the story of two girls, Amelia and Corisande, who fall in love at a boarding school. Corisande dies suddenly on the eve of graduation, but Amelia cannot shake her ghost. A narrative about obsession, the Minotaur, and the veil between life and death, Ceremonials is a poem in prose, a keening in words, and a song etched in ink. 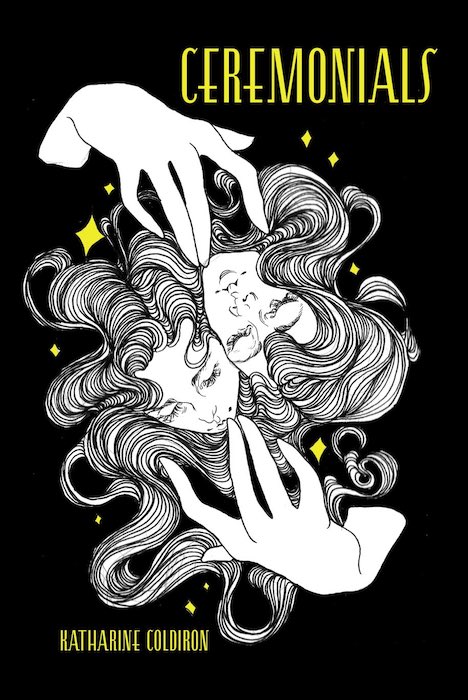 Thanks for saying that! The story idea came from listening to the album, mostly. A handful of other influences melted together in my head and reminded me of the album, or vice versa. The story I heard in the album was about ghost girls and love, betrayal and the ocean, and it kept making me think about films I’d seen and books I’d read—specifically Thérèse and Isabelle, the mythological character of the Minotaur, and a character from Dark City. Plus, the kind of obsessive love that makes you want to live inside someone else’s skin, and a day I almost drowned at the beach when I was a kid. All this stuff came together in a blender and made a smoothie that is the book.

My writing is strongly influenced by music. What role has music played in other pieces of your writing? Or in your writing process in general?

Oh, gosh. Some, but not a lot, to be honest. I was a giant musichead when I was in my late teens and early twenties, but I fell in love with cinema around the same time, and I’ve been able to write about that a lot more reliably. Or—for the last handful of years, my writing has had a strong relationship to film, like, the two are difficult to extricate from each other in my head. Music runs a backup track, supporting rather than influencing my work. It still matters to me a lot, but more as a civilian than as a writer. I think Ceremonials is sort of a one-off in that regard, in terms of music being a tentpole for my writing.

Have you sent a copy of the book to Florence? Or do you plan to?

When KERNPUNKT first accepted Ceremonials, I felt it was wise to contact Florence’s people to make sure I wasn’t going to get sued for the book’s relationship to her work. I tried a bunch of different ways to do this, from her music publisher up to her American agent. I got some replies, but I was still multiple steps away from the woman herself. Ultimately, their answer was to stop answering. I’m not sure if they lost interest, or if they thought the book wasn’t good and wouldn’t matter, or what. I believe I did due diligence for the legal end of it. I hope.

As for the personal end of it—I really hope the book makes its way to her somehow. I’m planning to submit it to her book club, Between Two Books (which is on hiatus right now), because I feel like it would be a perfect fit. She might see it that way.

There are addresses for fan mail or whatever, but I’ve never written to any of those. I sense they’re black holes rather than legitimate ways to contact someone at her level of fame. If the book ever does find her, I don’t expect her to endorse it—I won’t let myself hope for such a thing—but I would very much like for her to know that her record was that inspirational to me.

Narrowing this down is really hard. I believe that no piece of writing advice applies to every writer, so I like to offer them in opposition to each other—Elmore Leonard’s advice alongside Anne Lamott’s, or similar, to show that you have to accept the advice that works for you and reject (but remember for later, just in case your writing changes a lot) what doesn’t.

Best: You can break any rule at all if you write well enough. This advice kind of derives from Kurt Vonnegut’s addendum to his rules of writing, but I don’t know if a single person has said it exactly like I just said it. The asterisk to this advice is to be careful that you’re writing well enough, and not just obnoxiously trying to break rules.

Worst: The idea that writing is somehow sanctified. Like it’s a mystical calling. Like those who write are somehow better or more tuned in than the rest of humanity. Utter malarkey. That kind of self-satisfaction leads you nowhere.

On average, I read two books a week for review, so I hate this question. Also, right now, I’m reading for a couple of book prizes. So very little of what I’m reading, or have read in the past two years, is stuff I’d pick for myself.

For pleasure (sort of), I’m listening to the audiobook of Brideshead Revisited. It’s read by Jeremy Irons, so I often find that minutes on end have passed of me just listening to his voice rather than to the substance of the words. I loved Middlemarch, so I thought I’d like this, but it’s not nearly as good as I expected from a book with its reputation.

Recently I read and loved Erin Eileen Almond’s book Witches’ Dance, which is a beautifully made novel and an unusual one. After reading K. B. Thors’s poetry collection, Vulgar Mechanics, I immediately assigned it to someone to review for Barrelhouse. And I read Heather Christle’s The Crying Book all in one gulp on a plane and adored it. I want to buy a paperback copy and annotate the hell out of it. So good. 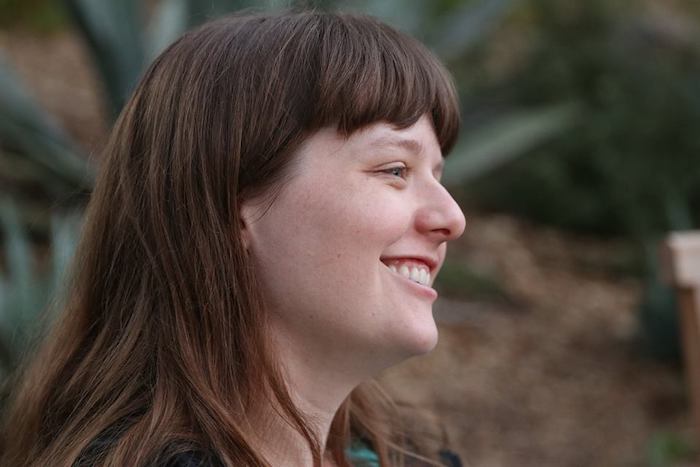 Katharine Coldiron’s work has appeared in Ms., the Washington Post, the Times Literary Supplement, LARB, the Rumpus, and many other places. Find her at kcoldiron.com and on Twitter @ferrifrigida.

Ceremonials publishes on February 11, 2020 and is available for preorder now wherever books are sold.

And catch Katharine on book tour if you can! 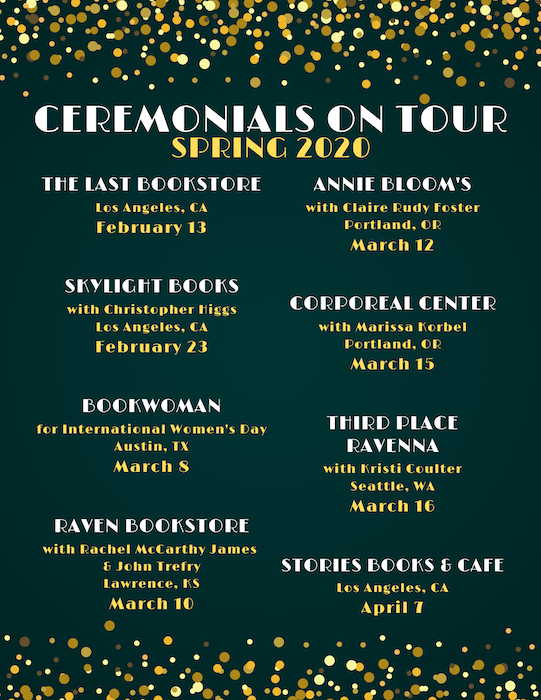 If you like this article, please share it! Your clicks keep us alive!
Tags
q&a
Books
authors
writing
Florence + the Machine
Katharine Coldiron
Music