Don't Like National Walkout Day? How About Kindergartners Preparing For A Shooter? 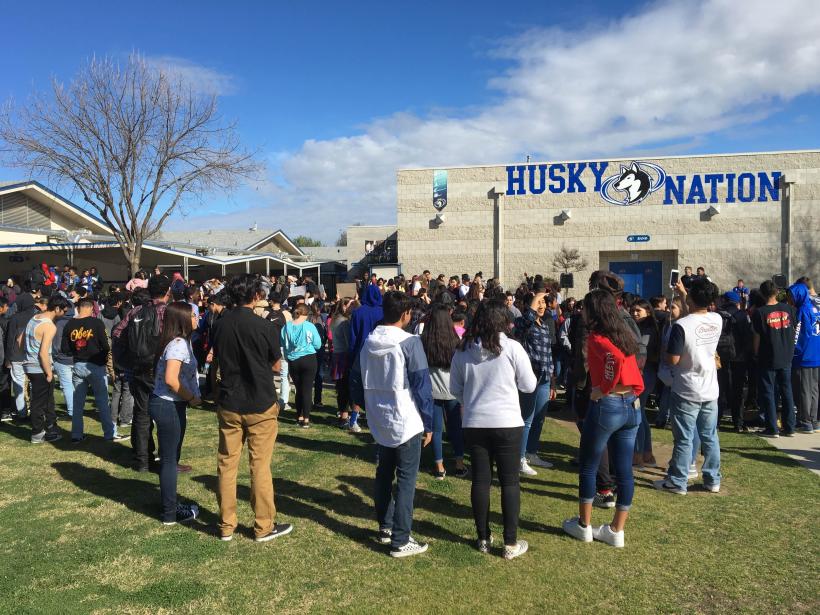 None of our kids should be living in fear of being killed while they are just trying to be kids. I’m supporting National Walkout Day!

This is how you do an intruder drill:

The teacher turns off the classroom lights.

The doors are locked. The teacher doesn’t have to lock the doors, because a few years ago the school installed door handles that are always locked from the outside.

So no one can get in.

Because there is a significant risk that someone will try to get into the classroom and kill my kids and their teachers.

The children go to the corner of the room and sit in a huddle.

Which kid has to be on the outside of the huddle?

They wait silently for the alarm to sound again, indicating that it’s safe to leave the huddle and go about their days as if they weren’t just pretending that someone was going to potentially murder them.

It rained yesterday. It doesn’t rain very much in California's Central Valley. So when it does it’s kind of notable. The kids don’t get to have recess in the rain. That means that yesterday, they weren’t outside, which means that the scheduled recess intruder drill didn’t go as planned.

Max, my five-year-old, came home very distraught that they didn’t do the planned drill.

“We didn’t do the intruder drill today, mommy. Because it was raining so we were in the library. We were suppose to do it! I guess we will do it tomorrow then!”

He punctuates his statement with an enthusiasm that breaks my heart.

When I asked him what an intruder drill was, he told me that it was an alarm in case someone that wasn’t supposed to be at the school was there and they needed to hide. He didn’t say “someone with a gun” but that’s what he meant. And he knows.

There goes my heart, breaking again.

This is the first planned recess intruder drill that we’ve had. It differs in that the children are expected to find a “safe room.” Max listed three safe rooms — his class, the library, the kindergarten class next to his. The class on the end of his row is not a “safe room.” He started to tell me why but I couldn’t hear him over the sound of my own heart breaking wide open a third time.

This morning Max was Facetiming with his dad, who is traveling for work. This is part of our morning routine. Dad asks how we slept, what’s happening that day. Today Max told him about the intruder drill. He told his dad about the safe rooms and the un-safe room and what the intruder drill means.

I grabbed one of the dishtowels I’d been folding and dried my tears before Max could ask me why I was crying.

Why is this the way my kids have to experience what should be the most carefree time of their lives?

While my two youngest children are having the recess intruder drill, my 18-year-old high school senior will be walking out of class in protest. Kids all around the country will be joining him.

People — the same people who thinks guns don’t kill people — think that kids walking out in protest is a waste of time. Not necessary. Just an excuse to get out of class. Stupid. People think that the same kids who watch their classmates die aren’t mature enough to know that something isn’t right here.

I think that kindergartners having to run for a safe room while they are supposed to be on the swings is one of the most tragic realities that our kids are facing today.

When I was in kindergarten, we incubated a dozen baby chicks. We colored. We learned to share and read. We took naps. We never had to think about the even remote possibility that someone unwanted would come into our classroom and open fire.

Because our kids deserve better than we are giving them. Our kindergartners deserve to run and laugh and play. Our teenagers deserve to be allowed to worry about Calculus and college and who they are going to ask to prom. None of our kids should be living in fear of being killed while they are just trying to be kids.

I’ll be supporting my son in his walkout today so that hopefully his kids will never have to know what an intruder drill is.