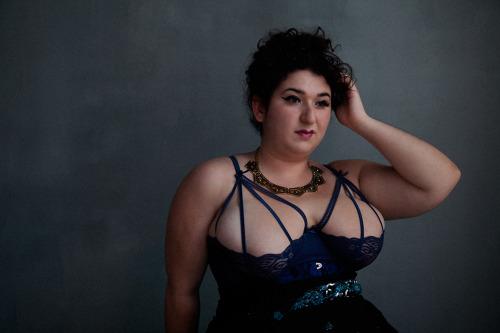 I got a tumblr around my sophomore year of high school, at a point in my life where my body image was so bad that I ate a daily lunch of apples and carrots — maybe a granola bar if I was feeling reckless.

It seemed that everywhere I looked, there were thin women holding the world in their dainty hands, in the arch of their slender necks, the hollows of their perfect collarbones. They seemed to be the only type of women worthy of having their stories told or their pictures taken. It would have been so easy to take a tumble down the whirlpool of pro-anorexia and #thinspiration blogs available to me, but I was lucky enough to take a different turn within tumblr’s maze of angst and anguish: body positivity.

I had never spoken with Fancy Feast before interviewing her, but I’ve known her for years. I met her one day in Algebra II, scrolling through my tumblr feed while I was supposed to be taking notes on parabolas or whatever. When I saw her picture, I stopped, stunned. There it was, after all this time: a fat woman holding the world in her hands. 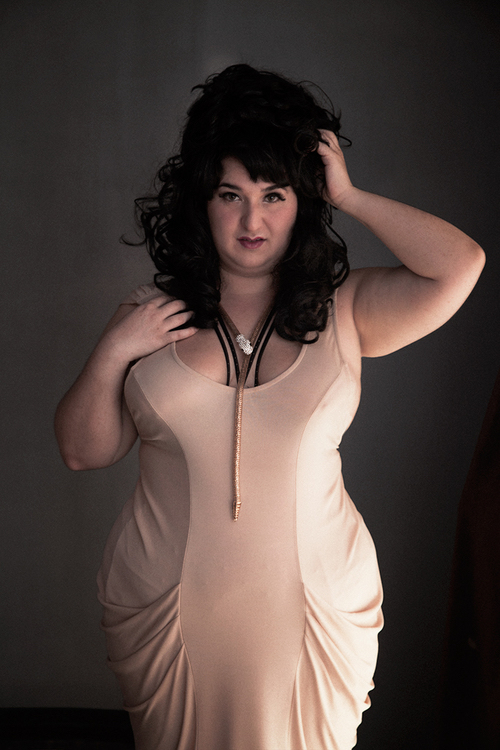 Finding women like her on the internet completely changed my world. I doubt I was the only young femme who found strength in seeing beautiful pictures of bodies that looked like their own.

I didn’t know Fancy Feast’s name then — but I sure do now. A seasoned burlesque performer, Fancy Feast also creates and produces a monthly "radically inclusive performance art spectacle" called the Fuck You Revue. I’m far from her only fan — independent filmmaker Leon Chase has a documentary about Fancy’s work available both online and at select screening around the country. Character will be screening in San Francisco on Thursday, July 27 at the Center for Sex and Culture.

I was lucky enough to give Fancy a call and chat about her career, her love for burlesque, and how to move through the world in a non normative body.

How did you get started in burlesque? What was your origin story for that?

Let's see. So the quick and dirty is that I've always really appreciated any sort of wild or rule-breaking femmes, so images of anything from Jessica Rabbit to —

(Rudely interrupts out of excitement) I loved Jessica Rabbit as a kid! That was like a huge part of my sexual awakening!

Absolutely. Oh my gosh, yes. I was gonna say her and then Elvira, and then Hedwig from Hedwig and the Angry Inch. That was all where I started in terms of my aspirational images. I had a friend take me to see a burlesque show when I was in college, and it was sort of the real life fulfillment of a lot of that aspiration that I'd had. I was like, "Come hell or high water I want to end up with this group of people."

When I moved to New York I started going to a lot of shows, talking to people who were involved in the community, and started helping out as sort of a stage manager role, and then there was a night where they needed somebody to fill in, and so it was that very classic story of, "The showgirl is sick. Who are we gonna find?" and I volunteered.

What advice would you have for other people with non-normative bodies, however that may be, getting started in something like burlesque or even making a choice to be more visible?

Oh my goodness. Do whatever the fuck you want, I guess, is the primary advice. And then, I guess, think about why you're doing what you're doing. The story I think that people have about burlesque when they're in non-normative body performing is that, "Oh, we're here to do this because we want to be self-actualized and we want to feel empowered and all of that stuff," and maybe that's true but, for me, that's not the primary thing. It's like, what is the story that I want to tell? What is the emotion that I want to evoke in the audience? How do I achieve that? Then it's not so much about the reality of what my physical body is, so much as the story that I want to tell with that body? If that makes sense?

It takes a lot of the existential pressure off of something like that.

Totally! And it makes the performance a conversation between the performer and the audience, rather than simply a means to an end for the performer themselves. And then all the good stuff about practice, and find mentorship opportunities, and ask questions, and take feedback, and listen. All that good stuff.

It's really radical. Unfortunately, it is quite radical [to think that] people with non-normative bodies be treated like human people, and their art should be taken seriously. I know that's really wild, but yeah.

There's a quote in the ad for the documentary that says, "It may be that I walk in the fat girl, but I get to choose how I walk out." Could you talk about that a little more? I love that idea. I think it's such a good way to walk through life, not just through burlesque.

I think one of the cool things about burlesque is that it affords an opportunity for a performer to tell a story, and that story could be anything from, "Look at how goddamn good I look," to "Here's something about a serious issue," or "Here's a character". What burlesque audiences, I think, really delight in, is that instead of having the audience projecting their fantasies in a sort of one-way direction, onto the performer, there is a negotiation of the fantasy, whereas, "Here is my fantasy, here is my story, and I'm presenting it to you to take what you want from it."

And so, that's the part that I find very subjectifying. It's like we are there for the gaze and consumption of ourselves, as well as of our audience. It's done for our own pleasure, as well as for the pleasure of others, and I find that to be incredibly powerful. That's not to say that club-stripping isn't that or doesn't do that, because I don't want to be critical of other forms of sex work. Stripping is awesome. And lucrative. But it's just a different industry.

I think that one of the things that is very foundational to burlesque, regardless of what the aesthetics are, or what the performer's point of view is, is that there's some sort of transformation, and oftentimes it's the transformation from wearing clothes to wearing fewer clothes. But there's that opportunity in that transformation to use that as a metaphor for something else. I think that's maybe what I was getting at when I was talking about walking in the fat girl and getting to choose who I walk out like. Me being fat and naked is the sort of most apparent part of what happens, but then there's an opportunity for more additional layers to be revealed, and for people to walk away, hopefully with something more than just that.

Awesome. I have one more question: Does Fancy Feast have something to do with the cat food? Because if it does, that's amazing.

Yes, there is sort of a trope in burlesque where performers will name themselves Kitty Something, or Something Kitty, or Something Cat. That's been a longstanding tradition and I thought it would be funny, especially since I was starting off in the queer nightlife scene, where irony was very much appreciated, to do something that was going to be a riff on that.

I love it. It's like a drag name too.

It's fantastic. Cats are great.

I love cats, that's for sure, but for it to be something that is satirical and that may not seem appealing at first glance, was important to me, but then the individual words are very meaningful and relevant when you break them apart. So Fancy, in terms of the idea of the heightened gender performance of burlesque and the artifice, and the costuming, and all that stuff. About that sort of opulence. And then Feast, a relationship with abundance and plenitude, and with my body. To have those two words operating simultaneously within the larger joke of it, was something that really appealed.

Yeah, and it does so much. It communicates the kind of experience that your audience is going to have. They're going to get a Fancy Feast for their senses.

That's what I was hoping!

You can find Fancy Feast on Instagram (@fancyfeastburlesque) or Twitter (@fancyburlyq). The Fuck You Revue runs every third Tuesday at Bizarre Bushwick.

The San Francisco screening of Character will be Thursday, July 27 at the Center for Sex and Culture (1349 Mission Street @9th Street) as part of a larger collection of burlesque films called The Cans.