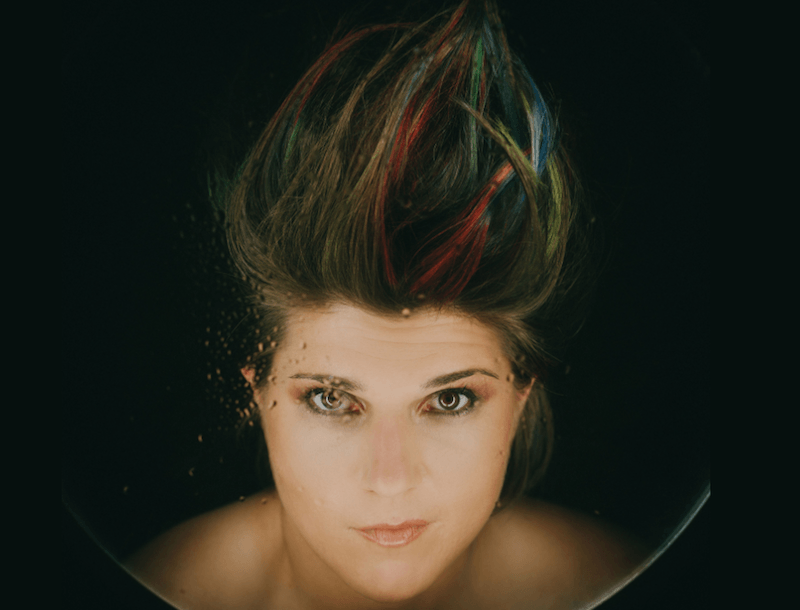 I normally go through PR music tracks as I work, listening while I type up an email or proofread a piece. When I opened the link to "Somebody's Someone," I found myself sitting and watching the whole thing, feeling every note, definitely shedding a tear or two in the middle of the workday. It was just too beautiful to put in the background. Daphne Willis's powerful voice delivers gorgeous lyrics that anyone who's ever struggled with mental health can relate to.

And her message is one all too often forgotten when in the throes of illness or addiction: someone out there loves you. No matter how alone you may feel, there is always someone out there who cares about you. Be it family, friends, or a spunky singer-songwriter, someone is glad that they share the world with you.

I recently had the chance to talk with Daphne about her background, her awesome parents, and the inspiration behind "Somebody's Someone."

How did you get started in music?

When I went to college, I had a band and I was doing open mics and stuff, and I had a song playing on American Airlines. The president of Vanguard Records was on a flight, and his ipod died. He plugged his headphones into the armrest and my song was playing and found out that I wasn't signed.

At the time I was doing bluesier pop folk and I was writing by myself. When I was signed, they had me go to Nashville for all these co-writes and I think over the years of being in Nashville and cowriting has impacted both the process and the outcome of my songwriting. I think I've grown as a writer and as a human. Moving to Nashville and collaborating with other people has been an awesome experience.

What was the inspiration behind "Somebody’s Someone"?

I believe that mental health is a spectrum and a continuum. I think just as humans we kind of bounce around all over that through all of our lives. I know I certainly have — I’ve been through bouts of depression and suffered from PTSD. I wrote it as a reminder to all of us that we are somebody’s someone.

I was writing with a friend of mine named Jenn Bostic, and we were talking about that lonely feeling of isolation. We wanted to write something to help other people and to remind ourselves — and that’s sort of how the song came about. [The response] has been amazing. I’ve gotten a lot of pictures and emails from people who are in recovery programs or doing psychotherapy and they’re actually using the song in some of the rehab centers… and that just makes my heart smile, you know?

It’s been overwhelming in a really good way.

How has writing music impacted your own mental health, as opposed to just listening to it?

When I listen to music, I tend to listen to positive uplifting music, so I try to embody that in the music that I write. I definitely use music as a therapeutic process... I almost cut "Somebody's Someone" but had a couple of good friends who encouraged me to put it out there. It’s such a vulnerable song that I wasn’t sure about putting it out because it’s so personal, but I’m really glad that I did.

That reminds of Lorde talking about releasing "Liability," how she almost didn't put that track on the album because it was too personal. It's so funny that the things that resonate the most are the things we are most scared of sharing.

I think people just connect with that. Even just with any interpersonal relationship, the more you open up, the more the other person opens up, the more you learn from each other, the more you feel safe with one another... and I think that feeling of safety is what people always want.

It’s so ironic, you know? People think it’s a weakness, but actually you are so much stronger when you can be that vulnerable in front of people.

What do you do when you’re not touring?

I love outdoor-sy stuff like hiking, biking. I’m into working out, yoga, fitness stuff. I go to see live shows all the time, hanging out with friends... but I love what I do, so it’s like eat, sleep, and breathe [music]. So everything I do kind of lends itself to this. If I’m not on the road, I’m writing 4-5 songs a week in Nashville and working on recordings while I'm there.

And then my parents also live in Nashville, and I love hanging out with my parents.

It sounds like they were a big influence for your music career!

Oh yeah, definitely. They took me to shows, encouraged me to sing, put me in all kinds of programs and different instrument lessons... you know, very very supportive.

Find more of Daphne's work on her website, or listen to her music on Spotify or iTunes.

If you like this article, please share it! Your clicks keep us alive!
Tags
Music
mental health
mental illness
Depression
PTSD
Interview
Chicago