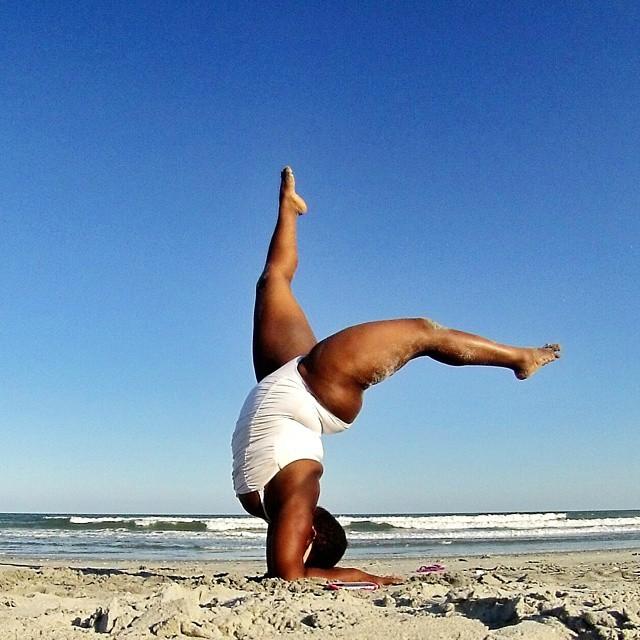 You've maybe (probably) already heard of Jessamyn Stanley, or at least seen one of her vibrant Instagram photos come across your newsfeed. Jessamyn's fiercely body positive yoga practice is making waves in online communities, bridging the gap between radical self-love communities and the increasingly white and thin yoga movement.

With a new book in the works and a lifelong commitment to making yoga accessible and enjoyable for everyone, we called Jessamyn up to chat about her yogi beginnings, the spiritual roots of her practice, and the revolutionary act of letting yourself exist.

You've described your first experience with yoga as "hell on earth." That sentiment is pretty relatable for a lot of people. What advice do you have for people who've had negative experiences with yoga?

I totally get that feeling of being like, "I tried this, it's not for me." I'll try it once or twice and if it just hasn't really resonated for me, then I'll be like, "yeah I'm good on that."

That's not really the best perspective to have, because it does vary by both the style and the person who's teaching. A lot of people think, "Oh, I've tried that before, I learned everything that I need to know about it and if that's what it's gonna be like, then it's not for me."

If you're the kind of person who's looking for a soothing experience, and you walk into an ashtanga yoga class, you might not have that experience. That doesn't mean that you wouldn't have it in a different class.

That's also why there has to be so many different teachers. Somebody else, or something else, is probably gonna be a fit for you — because this practice really is meant for everybody.

I think that's probably the biggest thing to take into account. Then, also, really noting the reasons that you get and enjoy something. Seeing if it has anything to do with self-fulfilling prophecy. There were judgments that maybe you carried into the studio with you. That's how you remember the class.

I think it's a funny thing, as a fat person, to hear people tell me, "Oh, you know, you maybe didn't have this experience" or, "Maybe it's not like this for you." I'm like, why wouldn't it be like that for me? I've literally been fat my entire life. Everyone has always said that if you're fat you can't make the team — you're not athletic.

That embedded over time means that, as an adult, you won't try new things. You will be scared to try new things and you will have negative experiences that might not have been negative had you not had so much stuff going on.

There's this part in your yoga origin story where you say "it's the one part of my day that is completely devoted to my mental clarity. Believe me when I say I'm not really in this for the health benefits and the exercise. I'm addicted to exceeding my personal expectations."

What makes the spiritual and mental aspects of daily yoga practice the most meaningful to you? Most people approach it from a more physical perspective?

I think that people who think that it's just a physical practice have very immature practices. Unfortunately, they've taught a lot of people that. There are many, many people who walk around thinking that.

If you're just saying I prefer the physical stuff, okay, then you're practicing the asanas.

That's fine with what you're doing, but if you were talking about yoga practice, it's more than just the physical poses. They are to help you create focus so that you can then see within yourself, so you can breathe, so you can meditate. You can move into a higher dimension of being.

That's a way bigger conversation than this. I don't want to be fit and flexible or whatever bullshit people are saying. I always say that because, for me, if this had always been about the "health benefits" — and by that people are talking about the physical health benefits — then I wouldn't still be doing it. I just don't have the attention span. I don't care about exercising that much.

I feel like the reason that my practice has moved beyond asanas is because, even in this short period of time, I feel that it's just so much more and it speaks to these much bigger conversations with myself. The things that have come up for me after the really intense practice.

Whether it's a physical practice or it's just the motivations in my day-to-day life and then adding breath work and meditation to that. The things that come up during meditation are very, very big things that I would not have come to otherwise.

It's kind of weird to talk about some of these things, but not all that long ago I had an experience meditating when I was very, very feeling off. I found myself saying in my mind "I love you" to myself. I realized, I never say that to myself. I can say "I love you" to all these other people in my life, but it's very difficult for me to give love to myself and feel that.

I came out of meditation crying. That conversation is so much more interesting than the bullshit like, "I want to do a handstand or a headstand." That's narcissism, that's ego, it's childish. That's nothing to do with the actual human condition.

Getting beyond that point is a part of practice. It is totally natural to get hung up on that. The issue is that many people don't even try to have that conversation. They don't go past that and all they do is worship handstands.

You refer to yourself as a fat femme proudly. As a fellow fat femme, it's super awesome to see someone like you practicing yoga. Yoga is white, thin, and straight 98% of the time. How have identity and visibility impacted your yoga, or vise versa?

Owning my fatness has been a very long process. I don't think it's over. I think this is a constant thing for me, for life. I don't really think being body positive in that way came as a result of practicing yoga. It came because I looked at photos of myself over time and realized, "Why am I hating on my body?"

Even though my belly's fat, and my arms are jiggling, they're obviously very strong and there's no reason to belittle that. In that kind of self-reflective way, it definitely did affect it.

I've noticed that a lot of people don't really have that kind of conversation with themselves as a result of the practice. I don't think that the things are related, I think that I was kind of an anomaly in that way. I don't know, I see that as two specific journeys.

Visibility is just a problem with any minority, period. Whenever you can pass as something else, it's an issue — because then you're not offering people the opportunity to understand something that they didn't understand before.

I feel like, as a person who's been very much queer, it's imperative that I own that for other people. I guess that, in a way, practicing yoga opens you up to the world. It opens up your spirit. These things are connected, but still feel like separate journeys in my mind. I feel like there are bigger journeys that I would say, "Yeah, this is directly related to my yoga practice".

What would you think those are?

So, while I was in my yoga teacher training, I was doing a partner exercise with one of my fellow trainees. She is a lot smaller bodied than I am. The exercise that we were doing required that we bear weight on each other. I kept apologizing through the whole practice. I would be like, "I'm sorry, I'm so sorry, I'm sorry."

At one point, she stopped me and she looked me right in the eye and she was like, "You don't have to apologize for everything." Then I just laughed and I was like, "I guess I'm just apologizing for existing."