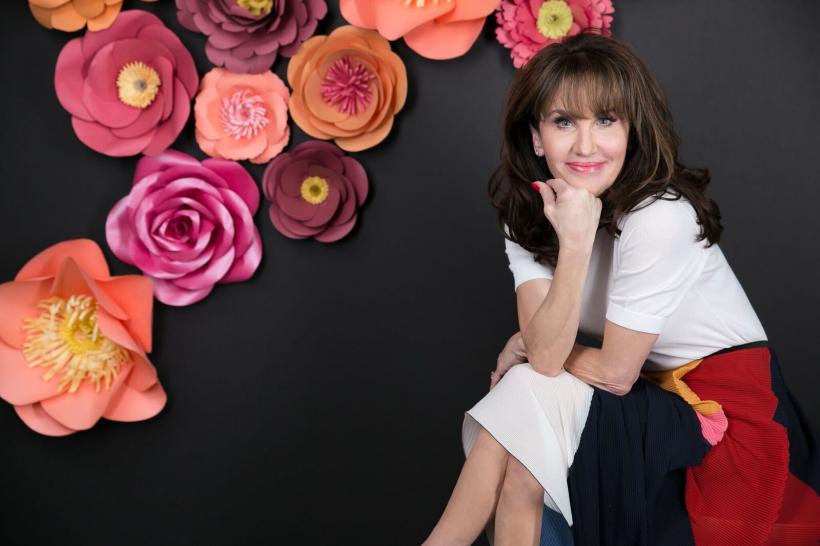 Although it’s only been in the past year or so that I’ve developed a burning passion for psychology, I’ve always been fascinated by people and relationships.

My interest in relationships has always drawn me to reality TV shows, memoirs, and YouTube celebrities. One of my earliest examples of this goes back to daytime TV, which I would delight in watching when I was sick and had to stay home from school. Dr. Phil was one of the many shows I frequented in my middle-school years; I was fascinated by the relationships I saw on his show.

One person who always stuck out to me was​ Dr. Phil McGraw’s wife, Robin McGraw. I think almost anyone who has watched an episode of Dr. Phil has looked forward to seeing Robin’s face in the audience and hearing her perspective. She usually chimes in to the conversation at some point during an episode, and I recall how much seeing her and Dr. Phil work together impacted me.

Fast forward to today, when I took the opportunity to interview Robin after discovering we had a mutual colleague. Although she’s best known as Dr. Phil’s better half, she is a force to be reckoned with in her own right as the founder and CEO of Robin McGraw Revelation, a two-time New York Times best-selling author, and an activist who works to help victims of domestic violence. I was so excited to learn more about Robin, and I definitely wasn't disappointed.

You do a lot of work to empower survivors of domestic violence. What motivated you to become a champion for such an important cause, like this one?

We've tackled a lot of important issues throughout the 15 seasons of the Dr. Phil show, but it has always been the stories of domestic abuse that pull at my heart the most. Being witness to the heart-wrenching stories made it clear to me that I could not just sit back and do nothing. I knew I had to do something more to help these women, children, and men.

In 2010, we launched a nationwide “End the Silence on Domestic Violence” campaign with the Dr. Phil Foundation. Enough money was raised to reopen the Domestic Violence and Sexual Assault Coalition in Grass Valley, California, which had been forced to completely eliminate shelter services due to budget cuts. Because of the incredible response the campaign received, I was moved to proudly launch When Georgia Smiled: The Robin McGraw Revelation Foundation in 2013, a foundation dedicated to helping victims of both domestic violence and sexual assault.

I named my foundation in honor of my mother, Georgia. While she was never a victim of domestic abuse, her path was challenging at times. Because my father suffered from alcoholism, it was my mother who brought a sense of peace to our life of uncertainty. When my siblings and I were children, my father would leave for the day and we never knew if this was the day he would just not come home, but instead start a binge of drinking and gambling. When he would start one, it varied at how long it would last. The one thing that I knew I could always count on was my mother. It was the smile on her face that gave me a sense of peace. I know now, she must have been as scared as all five of us children, but she never showed it. I could look at her and she always had her strong and loving smile that told me she was going to protect us and keep us safe. It was that strength and compassion I received from her smile that I want to bring to people who suffer from this silent epidemic.

Along with this, I remember first learning about Aspire News app, the app that helps to discreetly connect those who are in danger of domestic abuse to help and resources. Your work with this app has even been recognized on Capitol Hill for its impact. Why do you think there haven't been a lot of innovative tools like Aspire News app to come around, with domestic violence being such a massive public health problem?

One in five women in the United States have been the victim of severe physical violence by a partner in their lifetime, and an abuser’s number one tool is isolation. They restrict their victim’s contact with family, friends, and coworkers. They will do anything to keep them isolated like a prisoner in their own home.

Creating a tool that can be used by anyone can be difficult because abusers are constantly monitoring their victims’ lives, who they see, and the technology they use. This is why I’m so proud of my free Aspire News app because it is disguised as a normal app on your phone. It even has a decoy home page, so a victim does not have to be worried should an abuser take their phone. It also has a GPS tracking device in case your abuser takes you away from your home, and a recording device that starts recording everything that is happening so your abuser cannot say the victim started it. It has been downloaded more than 300,000 times worldwide! It is my hope that by educating everyone about the Aspire News app, it will encourage victims and their loved ones to be prepared and hide a phone so they can get help in a time of need.

I honestly think of you as the ultimate mother figure — I love how supportive you are of your family and the way you compliment and engage with your husband on his show. I think it's really commendable as well, since women often feel discouraged from identifying too strongly with the roles of wife and mother in order to be seen as independent. In a world that's often so polarizing in terms of telling women who and how they should be, how have you found your own voice amongst the noise?

Thank you, that is a tremendous compliment. I attribute a lot of who I am to my mother. She was my ultimate role model and she taught me the strength of a woman. I believe that I am the woman, the mother, the wife, and the grandmother I am today because of her.

Phillip and I just celebrated our 40th wedding anniversary in August, but we’ve been together for almost 44 years. He has known since our first date that I am strong and passionate. We started our friendship being very open about what we expected from each other and have never shied away from being honest about our feelings. He knows not to tell me who or what to be, instead he has always encouraged me to be true to the woman I am.

I’ve always been honest about my own needs. Honesty is so important because I believe in being authentic. The first time I was asked to be on the Dr. Phil show, I said, “I am not an 'expert.' But, I am an expert at who I am; I can share my own experiences as a woman, wife, and mother.” I have always believed in sharing my personal stories, what I believe has and hasn’t worked for me. So when you see me on the show, it is real and it is honest.

Since a lot of the work you do deals with relationships, I'd love to know what your advice would be for women who are looking to better their romantic lives and demand more from their romantic relationships. On a personal level, I come from a family of divorce and I'm being very proactive to prevent getting into the same kind of situation myself, and would love to know what advice you have for creating a strong, healthy foundation with your partner.

We just celebrated our 40th wedding anniversary! We believe that a marriage is not 50/50, but 100/100. We sat down many times before getting married and shared with each other what we could and could not live with. We learned exactly what we needed from each other and we focus on that to this day. We’re not perfect and marriage can be tough, but we both make an effort every day.

I believe it is the time you are most vulnerable when you are having those conversations. I feel when your partner tells you what upsets him/her, you must hear it, believe it, and never ever use that information against them. When they tell you what they need, you should hear them, believe them, and do everything you can to fulfill that need. It is at this time to voice that you trust they are going to do the same; you have to be honest and open to listening to each other. We all live busy lives and things get in our way, but at the end of the day it’s only the two of you and you both have the right to decide what you want to get out of this life.

I'm a huge book nerd and since you're an author, I imagine you're probably a big reader, too (I've never met a writer who didn't enjoy a good book). What book is on your bedside right now?

You are right! I love to read! I find it is a celebration after a hard day of work to be able to sit down with a great book, if only for a few minutes or even an hour.

Every morning I read Jesus Calling and Jesus Lives by Sarah Young, a daily devotional filled with words of encouragement and daily reminders of His unending love for us.

I also love crime mysteries. Right now I am reading Behind Closed Doors by B. A. Paris.

If you like this article, please share it! Your clicks keep us alive!
Tags
Robin McGraw
marriage
domestic violence
activism
Aspire News