Take The Cake: Dear Fat Girl, Do You Know How Powerful You Are? 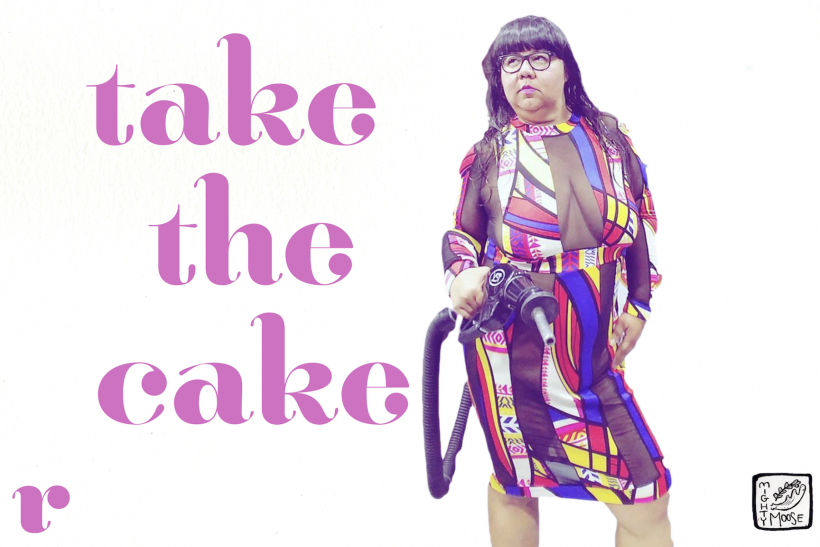 Femininity as we know it is about smallness — metaphorical and actual. Fat women defy the core tenet of femininity, which is: be small. It doesn’t matter if we “chose” this power or not.

A question that has been haunting me for well over a month now is one that was posed to me by an ultra cute, very smart fat girl. She asked me how I learned to give up on the dream of being a desirable, beautiful, sexy thin person. Her question seemed to unveil a worldview indicating that women like us simply had to let go of the idea that we could become hot babes with the potential to take over the world (wrong).

I remember I wasn’t satisfied with the answer I gave her. So I wanted to rectify that. Here’s what I wish I had told her:

I thought I was giving up the dream of success and beauty because I had been taught my whole life that power looked only one way. What I came to realize (first as a feminist and then as a fat activist) was that power doesn’t come from fitting into the narrow confines of a cultural mold. The desire to be just like everyone else is a product of trauma — the idea that we don’t deserve to be authentic because homogeneity is better than the multiplicity of human expression.

Fat women are powerful precisely because our bodies interrupt what it means to be a vanilla, cookie-cutter lady person. Femininity as we know it is about smallness — metaphorical and actual. Fat women defy the core tenet of femininity, which is: be small. It doesn’t matter if we “chose” this power or not.

The truth remains that not all power is something we know what to do with or how to handle, but once we recognize what we’ve been hiding under a bushel we are better equipped to wield and revel in it.

In reality, becoming a fat feminist felt like winning the goddamn lottery. My choice not to attempt weight control was exactly that — a choice. Absolutely, I hated dieting. I hated weight cycling. I hated hating food. But I also sensed something bigger was available to me than the possibility that I should work my ass off every day of my life in the hope that someday I would be thin enough that every man I met would want to marry me and women would sigh enviously as I crossed their path.

I wanted more, and compliance was literally never going to give me that.

Further, I had completely bypassed the fact that there was a reason that people had spent so many hours, years, words, and hateful stares to suppress me. There’s no need to suppress someone unless they are threatening — unless they are powerful. My fat body has given me many things, but most valuable among them was that perspective.

I identify as a desirable, smart, hot and powerful person. My fatness is integral to that reality, not in spite of it.

My unique capacity to see the vile underbelly of “normal” life made me an important witness to the reality of cultural failure. My inability to pass as a “regular lady” had helped build a road out of the stifling reality that so many of us face — that women’s lives are mapped out for them before they even embark on their life journey.

I think of the thin, beautiful women I went to high school with who were all rapidly claimed by douche bros from my neighborhood by the time they turned 20. They were married mothers before most of them had had the chance to even contemplate whether that was what they wanted. The fact that I didn’t have that experience was an asset to me. It was painful to experience the rejection that made that asset possible, but as my Many Moons Workbook says: “there is no manifestation without sacrifice.”

Related: Take The Cake: I Shared My Weight In A Personal Ad & Here's What Happened

Letting go of the thin ideal isn’t so much about giving up as it is about growing up — something the culture really doesn’t like women to do. If it were up to the culture, we’d be running around in pigtails speaking in cutesy monosyllables for the entirety of our lives. The culture rewards the outward appearance of adulthood with the behavioral touchstones of childhood — perpetual approval seeking, obedience to paternalistic control, and complete ignorance of boundaries.

Dieting keeps us perpetually in that little girl mindset. Girls are culturally trained to be codependent and gain worth from external sources, especially men.

I encountered an example of this sexist reality last week when I drove past a Lululemon branded trailer with transparent walls and a treadmill inside. It was parallel parked next to a busy street during commuter hour. Next to the trailer was a line of grown women waiting to run on the treadmill for a certain amount of time so that they could get a goody bag. I was stopped at a red light and looked on with horror. I took a picture to memorialize this ode to sexist condescension and infantilization. I tried to look visibly disturbed, but my stink-eye could not penetrate the thick wall of Lulu-righteousness.

I identify as a desirable, smart, hot and powerful person. My fatness is integral to that reality, not in spite of it.

Fat girls, do you have ANY idea how powerful we are? We are the inconvenient witnesses who create possibility for utopic vision. We are the non-normative, the interrupters of gender trajectories, the resilient ones, the sensitive souls whose pain paves a road into healing. We are the creative seamtresses, the stretch testers, the innovators of style. It is our stories that have led to a new wave of feminism.

And we’re just getting started.

If you like this article, please share it! Your clicks keep us alive!
Tags
take the cake
Virgie Tovar
fat phobia
fat politics