Thanks, Sports Illustrated, For Giving Women Another Body Part To Hate 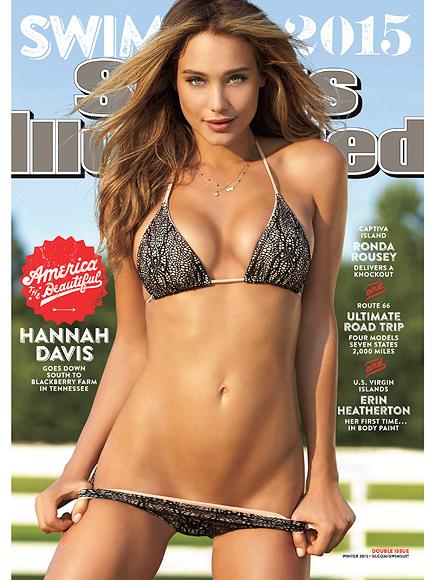 The list of desirable female anatomy is long; and now, thanks to Sports Illustrated, it's grown longer. The provocative cover shot for the magazine's swimsuit edition shows the epitome of the latest sexy look: a lower-tummy/upper-vaginal area free of fat or hair. In the photo, model Hannah Davis lustily yanks down her bikini bottom to reveal a toned, smooth sneak peek of her nether regions.

"Back in the day, nobody worried what her m.p. looked like because nobody was seeing anyone else’s. One could go hours—days, even—without glimpsing another lady’s ladybusiness.

Now it’s all out there, right next to Good Housekeeping on the newsstands and the latest on Brian Williams on the Internet. Formerly among the most private of private parts, the mons pubis is now just another area to be pruned and policed; examined and improved, weighed in the balance and found wanting. It’s obvious, but, perhaps, worth pointing out that what regular, everyday women have in their panties does not much resemble what Ms. Davis so boldly displays. For starters, there’s occasionally hair. For another, there’s frequently a bit of padding."

Weiner notes, sagely, that it makes biological sense for there to be, at the very least, some padding where Davis has none: "Do men really want to thrust against something as firm and sculpted as a clenched fist?"

But where there's a profit to be made, there's a way to make women feel like lumps of undesirable flesh, just begging to be sculpted and molded into something "ideal." One wonders what the next craze will be; what's left on the female body to subtly criticize and hold up to an impossible ideal. The curve of the calf muscle? The shape of the clavicle? The size of a finger?

When will it stop?

If you like this article, please share it! Your clicks keep us alive!
Tags
Sports Illustrated
hannah davis
body image
swimsuit edition
cover