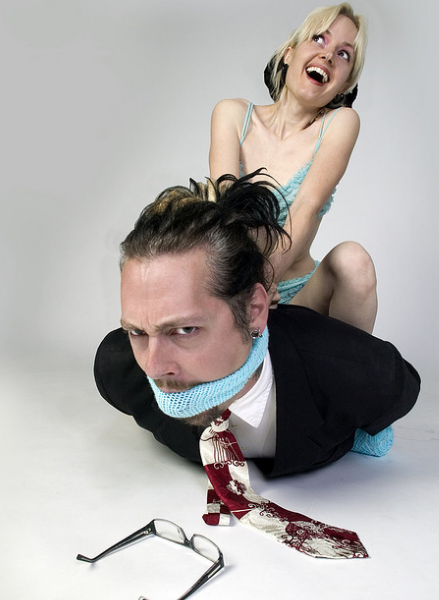 There are legitimate critiques of Sheryl Sandburg’s Lean In phenomenon (seriously!) including questionable tips for corporate women, and the Lean In Tumblr page’s recent praising of a seemingly anti-women woman).

Happily we can all give a resounding cheer for its newest project however: A partnership with Getty Images to create stock images without tired-as-hell sexist stereotypes.

Can you imagine? Reading stories without images of women holding babies in their briefcases, or giant high heels crushing defenseless men, or power suited-up women climbing a mountain (get it?), or daft shots of women in boxing gloves and business attire, or barely there outfits, or just straight up nude?! Can't we just be, like, normal people?! Puhlease?

The new project focuses on depicting women as looking natural in their various roles: doing their jobs in understated poses, wearing business casual rather than power suits, doing recreational activities like riding skateboards and lifting weights, and showing a diversity of occupations—including women as surgeons, soldiers, bakers, and painters.

It will even include more diverse family imagery—including (again, normal-looking) images of men caring for children (gasp!) because we’re finally – as a society – beginning to wrap our minds around the fact that a male correlate of motherhood is fatherhood ... not bringing home the bacon.

A lot of news consumption consists of scanning headlines and pictures—which contributes to the significance of the imagery used. As Sandberg says:

When we see images of women and girls and men, they often fall into the stereotypes that we’re trying to overcome, and you can’t be what you can’t see.

If you like this article, please share it! Your clicks keep us alive!
Tags
Sandberg
Lean In
stock images
gender
Getty
partnership
feminism
sexism